Ichnology: The Study of Tracks and Traces

"Without tracks we have to reconstruct extinct animals from their lifeless bones, and as experience has taught us, such reconstructions are not always correct. In addition, tracks are always made exactly where animals passed by-what geologists call in situ. By contrast, bones may be washed long distances before they finally come to rest in the sedimentary layers in which we find them. Dinosaurs may have floated far out to sea. Thus, tracks are an integral part of the ancient ecosystems in which they are found." Martin Lockley and Christian Meyer Dinosaur Tracks and Other Fossil Footprints of Europe 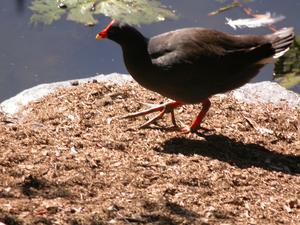 This large-footed orange brushfowl is about to make a sizeable track at Mt. Koot-tha Preserve in Brisbane, Australia. Details

Ichnology is the scientific term for the study of tracks and traces. This includes vertebrate footprints, nests, and burrows, and some would even argue that eggs, fossilized feces and bite marks count in this category too. The term also refers to invertebrate movement traces, burrows and borings. Ichnology is the single greatest evidence for behavior of extinct animals.

Check out these resources to learn more about traces:

Check out these resources to learn more about tracks:

Check out these resources to learn more about trackways:

Check out these resources for ideas on teaching about traces, tracks and trackways: