Numerous fields in paleontology are developing rapidly, and many of them do not have a large presence on the internet yet. These are three fields that are very important and have some good pages associated with them. 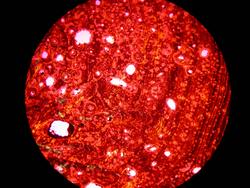 Dinosaur bone under a microscope. Details

Histology, or the study of biological tissues, has been an important topic in paleontology since the 1970's. It is still increasing in popularity today, particularly due to exciting finds like the discovery of gender in a Tyrannosaurus rex. Histology has also provided key information about animal growth, physiology, diseases, and intriguing soft tissue anatomy like the locations of animal trunks and horns.

Check out these websites to learn more about histology: 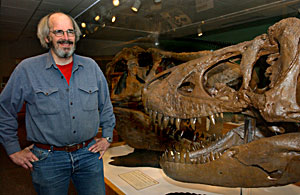 Jack Horner with a cast of the B. rex skull found in eastern Montana. Details

Dr. Jack Horner made his first historical dinosaur discovery as a research assistant at Princeton University when he discovered Egg Mountain (article from The Nature Conservancy), a large dinosaur colonial nesting site near Choteau, Montana in the Two Medicine Formation. Around this time he also began studying dinosaur bone histology under Dr. Armand Ricqles in Paris. Dr. Horner eventually founded the world-class dinosaur paleontology program at Montana State University. He has curated paleontology collections at the Museum of the Rockies and conducted large scale excavations in Montana. He has also named new dinosaur species including Orodromeus makelai, Maiasaura peeblesorum, Einiosaurus procurvicornis, Prosaurolophus blackfeetensis, and Achelosaurus hornerii.

As a histologist, Jack has made significant contributions to the understanding of dinosaur growth, through examining different growth stages in numerous species. He has also helped describe the specific appearance of dinosaur bone tissue in relation to their physiology, and inferred their soft tissue functional anatomy through traces of connective tissue in the bone.

Show me a list of selected abstracts and articles

Show me a list of NPR news radio interviews

The Evolution of Development

The evolution of development, commonly called evo-devo, is concerned with the interconnections between the patterns of development in all forms of life. These connections are seen mainly through comparisons of developmental gene sequences and the way in which they behave. Many of the interesting discoveries in the field have shown that the genomic differences between distantly related animals are less significant that was originally thought, and in some cases even minute. As more animal genomes are mapped, evo-devo will continue to produce more and more lessons about the origins of diversity.

Show me resources about evo-devo

Dr. Sean Carroll is a professor at the University of Wisconsin where he studies the evolution and development of animal body plans through genetic pathways. Dr. Carroll works specifically on the genetics of fruit flies and butterflies and has discovered that body patterning in butterflies can explain a lot about developmental changes. Since butterflies have a wide variety of spot patterns, the developmental genes for these spots can be easily deciphered, and these differences can be compared to the differences between related animals. Through the findings of his research on insect development, Dr. Carroll has become a spokesman for the science.

The field of biomolecular paleontology covers a broad spectrum of subjects, including exceptional preservation, paleodiet and the food web or trophic levels, paleoclimate, physiology and growth. The field is divided into those who study stable isotopic geochemistry, which is useful for reconstructing diet, climate, physiology and growth, and those who study molecular geochemistry, which is primarily tied to preservation and diet. Several researchers are profiled below.

Dr. Fogel is a geochemist at the Carnegie Institute in Washington. She has worked on such areas as astrobiology, paleoclimate of Australia, and the Arctic Mars Analogue Svalbard Expedition. Her primary biomolecular paleontology work concerns the changes in plant community composition as interpreted by the diet of ancient Australian animals.

Dr. Fox is a stable isotope geochemist at the University of Minnesota. He works on the relationship between changes in the North American climate during the ice age and the distribution of mammals. This work primarily focuses on animal diets and body size, and the shifting nature of their habitats in relation to areas that had been recently deglaciated just after the retreat of the Laurentide ice sheet. This important work has been made possible in part through the analysis of isotope changes in animal teeth.

Dr. Paul Koch is a geochemist at the University of California, Santa Cruz. His research lab interprets mean annual temperature and rainfall in the past through the use of oxygen isotopes locked in ancient mammal teeth. The lab has also worked on examining the relationship between the appearance of new plant and animal groups at the Paleocene/Eocene age boundaries and its relationship to climate change in the Rocky Mountains.