Cultural Heritage of the Crow

This page was written by Erin Klauk as part of the DLESE Community Services Project: Integrating Research in Education. Funding was provided in part by the Montana Office of Public Instruction. 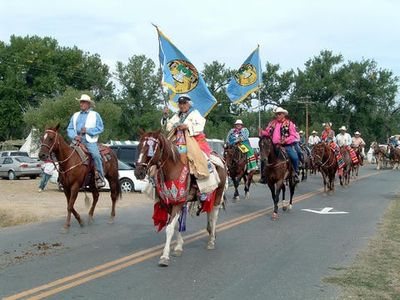 Hide
Pauline Small on horseback. She carries the flag of the Crow Tribe of Indians. As the first woman official, she is entitled to carry the flag during the Crow Fair Parade. Details

The Crow, also called the Absaroka, Apsalooke, Apsaroke or Absarokee, who historically lived in the Yellowstone river valley, now live on a reservation south of Billings, Montana at Crow Agency, Montana. The reservation encompasses approximately 2,300,000 acres, with about 98 percent of the estimated 10,603-12,000 tribal members residing in Big Horn and Yellowstone counties (Wikipedia). The Crow came to live on this land after migrating through the Great Plain in search of The Sacred Tobacco Plant, which they found in the east slopes of the Big Horn Mountains (Crow Indian Tribe Resources Report: Culture and History).

The Crow language is a member of the Missouri Valley Siouan languages, believed to have split from the Hidatsa tribe in present-day North Dakota either around 1400 to 1500, according to cultural anthropologists, or 900 to 1000, according to linguistic anthropologists. The traditional shelters of the Crow are tipis made with bison skins and wooden pole. Traditional clothing the Crow wore depended on gender. Women tended to wear simple dresses made of mountain sheep or deer skins, decorated with elk teeth, and covered their legs with leggings and their feet with moccasins. They had short hair, unlike the men. Male clothing usually consisted of a shirt, trimmed leggings with a belt, a robe, and moccasins (Wikipedia).

The Crow lived under one rule, a government where leadership, trust and respect was earned. Certain accomplishments had to be met before an individual could be called a Good Man, and only Good Men were involved in deciding the future and well being of the nation. These requirements include leading a successful war party, touching a live enemy under fire with the bare hand, capturing a weapon from the enemy under fire, and capturing a tethered horse in the middle of the enemy's camp. The basic components of the Crow way of life include The Clan System, The Sacred Sweat Lodge, The Sacred Pipe and Smoke Talk (Crow Indian Tribe Resources Report: Culture and History). 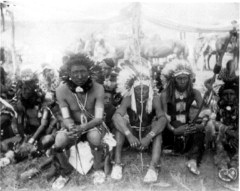 Today, ranching and farming, government services, coal mining, and tourism create jobs for many of the people.

To further investigate the culture of the Crow, check out the links below:

Culture of the Crow

Resources containing information about the Crow

Show me culture resources about the Crow

Hide
For ideas on how to use these webpages in a classroom, a Study Guide is provided.