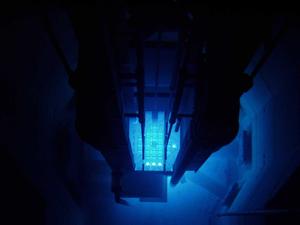 Core of 1 MW research reactor. Click image to enlarge. Details
Instrumental neutron activation analysis (INAA) is used to determine the concentration of trace and major elements in a variety of matrices. A sample is subjected to a neutron flux and radioactive nuclides are produced. As these radioactive nuclides decay, they emit gamma rays whose energies are characteristic for each nuclide. Comparison of the intensity of these gamma rays with those emitted by a standard permit a quantitative measure of the concentrations of the various nuclides.

The n-gamma reaction is the fundamental reaction for neutron activation analysis. For example, consider the following reaction 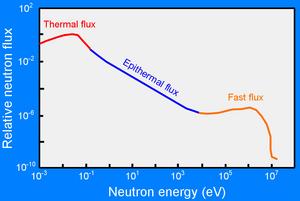 The activity for a particular radionuclide, at any time t during an irradiation, can be calculated from the following equation

where At = the activity in number of decays per unit time, σact = the activation cross-section, φ = the neutron flux (usually given in number of neutrons cm-2 s-1), N = the number of parent atoms, λ = the decay constant (number of decays per unit time), and t = the irradiation time. From this equation we can see that the total activity for a particular nuclide is a function of the activation cross-section, the neutron flux, the number of parent atoms, and the irradiation time. Note that for any particular radioactive nuclide radioactive decay is occurring during irradiation, hence the total activity is determined by the rate of production minus the rate of decay. If the irradiation time is much longer than the half-life of the nuclide, saturation is achieved. What this means is that the rate of production and decay is now in equilibrium and further irradiation will not lead to an increase in activity. The optimum irradiation time depends on the type of sample and the elements of interest. Because the neutron flux is not constant, the total flux (called fluence) received by each sample must be determined using an internal or external fluence monitor.

It is sometimes useful to convert from half-life to decay constant. This can be done using the following equation

where t1/2 is the half-life and λ is the decay constant.

After the sample has been activated, the resulting gamma ray energies and intensities are determined using a solid-state detector (usually Ge). Gamma rays passing through the detector generate free-electrons. The number of electrons (current) is related to the energy of the gamma ray. Because there can be thousands to hundreds of thousands of gamma ray interactions per second with the detector, an important criteria in system design is the response time of the detector to gamma ray interactions (as measured by the dead time). Each radioactive nuclide is also decaying during the counting interval and corrections must be made for this decay. The standard form of the radioactivity decay correction is

where A is the activity at any time t, Ao is the initial activity, λ is the decay constant and t is time.

When subjected to a thermal neutron flux 235U atoms in a sample will undergo fission producing a variety of fission products, some of which are nuclides of interest. Hence, a correction that must be made, when U is present, is for the amount of a nuclide produced by the fission process.

Instrumental Neutron Activation Analysis (INAA) Instrumentation - How Does It Work? 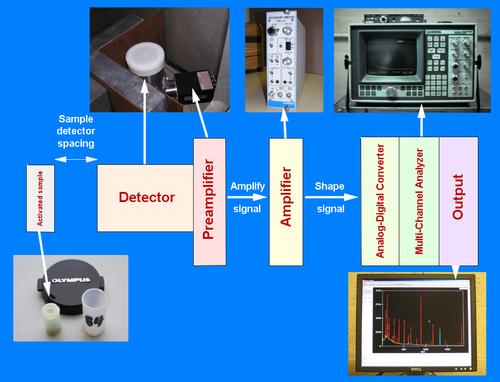 Flow chart for a gamma-ray spectroscopy system. Click image to enlarge. Details
A computer is used to visually show the resulting spectrum and to do calculations on the spectrum. Various algorithms are used to determine the shape and energy of each gamma-ray peak present in a spectrum and to determine the area encompassed by the peak (i.e., the gamma-ray intensity). Subsequent decay, interference (if required), fluence, fission product corrections, and comparison with a standard lead to a quantitative analysis. 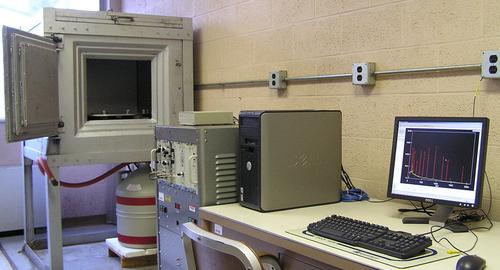 Hide
Gamma-ray spectroscopy system (automated sample changer). The detector is kept at liquid nitrogen temperatures (dewer under cave). The small box on top of the cabinet combines all the functions of the HV power supply, spectroscopy amplifier, and analog-to-digital converter. The resultant spectrum is shown on the computer screen. Click image to enlarge. Details

While liquid samples (if certain precautions are taken) can be analyzed by INAA, solids are the matrix of choice for this technique. Virtually any material can be analyzed and limitations are largely due to the chemistry of the matrix. For example, it would be difficult to obtain low detection limits for a sample of pure iron because given the half-life (44.6 days) of 59Fe, the sample will have a high background for an extended period of time and shorter half-life isotopes will be gone from the sample before this background is reduced. Examples of the types of materials that can be analyzed by INAA are:

The strengths of INAA are:

Additionally, compared to many analytical techniques, the instrumentation cost is relatively low. In 2007 it would cost about $50,000 to set-up an INAA laboratory. 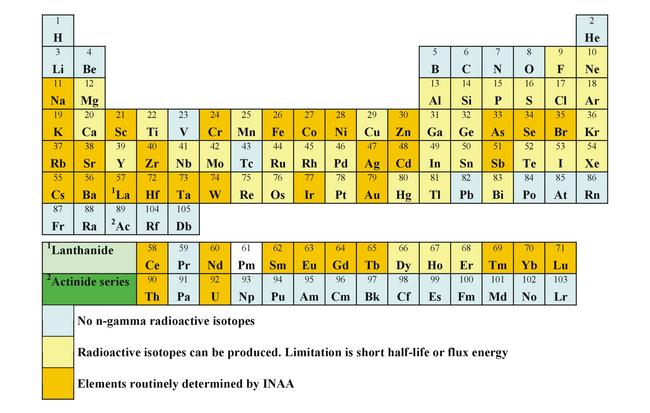 Periodic table showing elements that can be analyzed by neutron activation analysis. Click to enlarge. Details

There are very few limitations. The major limitation is the number of elements that can be analyzed by this technique. Several elements of geological interest, such as Nb, Y and some transition metals, are better determined by other analytical methods. For example, more precise Rb, Sr, Y, Nb, and Zr concentrations can be obtained by x-ray fluorescence (XRF). In fact, INAA and XRF are complimentary techniques and rock and mineral chemistries are often determined using both INAA and XRF. Also, because there is no chemical pre-separation, the sensitivity of the method is dependent upon the sample matrix. For example, detection limits for all elements are lower in tree ring samples than in rock samples. 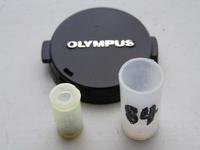 Sample vial (smaller vial) and counting vial. Details
Because of the low detection limits for many elements, sample collection and preparation is critical. Great care must be taken not to introduce contaminants. Virtually any solid material can be analyzed by this method, but there are geometric constraints—the sample must fit into the irradiation vial and should present a consistent geometry. Before selecting material for analysis consideration should be given to the geometrical factors.

In modern laboratories the final results are presented as concentrations, in weight percent, ppm, or some other convenient unit. All the data reduction is handled by computer codes. Geochemical data can then be critically reviewed and represented in any number of chemical variation diagrams (see module on Using Geochemical Data).

Among its many uses, INAA has been widely used to obtain analyses of the Rare Earth Elements (REE). Examples of REE data from a variety of rock types including phonolites, granites, syenites and nepheline syenites are displayed below. 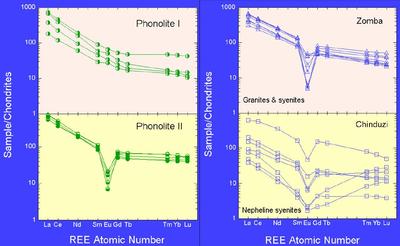 For more information about Instrumental Neutron Activation Analysis (INAA) follow the links below.

A PDF version of this technique sheet can be accessed by clicking here (Acrobat (PDF) PRIVATE FILE 389kB Apr18 07).