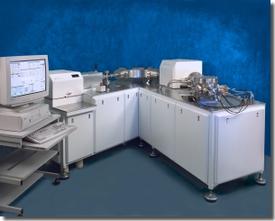 Nu plasma MC-ICPMS. Details
MC-ICPMS is an instrument that measures isotopic ratios that are used in geochemistry, geochronology, and cosmochemistry. A MC-ICPMS is a hybrid mass spectrometer that combines the advantages of superior ionization of an inductively coupled plasma source and the precise measurements of a magnetic sector multicollector mass spectrometer. The primary advantage of the MC-ICPMS is its ability to analyze a broader range of elements, including those with high ionization potential that are difficult to analyze by TIMS. The ICP source also allows flexibility in how samples are introduced to the mass spectrometer and allows the analysis of samples introduced either as an aspirated solution or as an aerosol produced by laser ablation.

As a hybrid mass spectrometer, MC-ICPMS combines an inductively coupled plasma (ICP) plasma source, an energy filter, a magnetic sector analyzer, and multiple collectors for the measurement of ions. The ions are produced by introducing the sample into an inductively coupled plasma which strips off electrons thereby creating positively charged ions. These ions are accelerated across an electrical potential gradient (up to 10 KV) and focused into a beam via a series of slits and electrostatically charged plates. This ion beam then passes through an energy filter, which results in a consistent energy spectrum in the ion beam and then through a magnetic field where the ions are separated on the basis of their mass to charge ratio. These mass-resolved beams are then directed into collectors where the ions reaching the collectors are converted into voltage. Isotope ratios are calculated by comparing voltages from the different collectors. 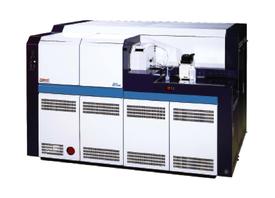 ThermoFinnigan MC-ICPMS. Details
Modern MC-ICPMS are composed of three primary components: The electronics of these instruments must operate to very close tolerances in order to produce isotope ratios that are precise to 0.01-0.001%. In addition, a high vacuum needs to be maintained along the path of the ion beam in order to avoid scattering of the ions due to interaction with air molecules.

The primary application of MC-ICPMS is to measure the isotopic ratios of elements used in geochronologic/thermochronologic, radiogenic isotopic, and stable isotopic studies. Geochronology/thermochronology refers to the use of radioactive decay to obtain the time of a specific geologic event, which is referred to as an age. Tracer isotopic applications use the natural isotopic variations in radiogenic isotopes due to decay of radioactive elements. These isotopic variations can be used to evaluate the interaction between geochemical systems and/or reservoirs. This application can also provide general chronologic information, often referred to as model ages, which more loosely constrain the timing of geologic processes and the development of, and interaction between, geochemical reservoirs. 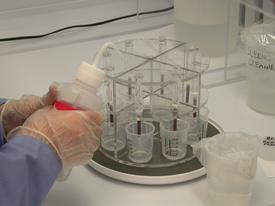 Separating elements on ion exchange columns in a clean laboratory. Details
For terrestrial systems, common applications in geochronology and tracer isotopic studies involve the following isotopic systems
In cosmochemistry, isotopic compositions are used to place constraints on nucleosynthetic processes and the timing and evolution of solar system formation. This involves use of the isotopic systems noted above, but also includes the use of extinct radionuclides, which are nuclides that were formed during nucleosynthesis, but have short half lives (generally < 100 m.y.) and are no longer naturally present in the solar system. Their presence is detected by measuring isotopic variations in daughter isotopes, as observed principally in meteorites. In addition to the systems noted above, systems of cosmochemical interest include:

The advantages of MC-ICPMS compared to other isotope ratio techniques include:
- the ionization efficiency is very high (near 100%) for most elements which enables analysis of most of the elements of the periodic table, including those with high ionization potential that are difficult to analyze by TIMS
- the MC-ICPMS operates essentially as a steady state system during the analysis resulting in time invariant mass fractionation
- there is consistent mass bias variation across the mass range which allows the use of an adjacent element to calculate mass bias for those elements without > 2 stable isotopes
- the MC-ICPMS permits flexibility in sample introduction systems. Solutions can be introduced at atmospheric pressure, which allow ease in handling. Laser ablation systems can also be coupled with the MC-ICPMS, which allows in-situ isotopic measurements in solid materials (e.g., Hf isotopes in zircon).

The disadvantages of MC-ICPMS include:
- essentially all elements introduced into the plasma are ionized including doubly charged species, oxides, and argides; in order to achieve the highest precision and accuracy samples, need to be chemically purified (at least as pure as for TIMS).
- even with static multi-collection, plasma instability can limit precision
- even though ionization efficiency of the plasma is near 100%, transmission of ions is lower than with TIMS because the plasma-generated ion must be transferred from atmospheric pressure to the high vacuum of the mass spectrometer. Many ions are lost during this difficult transfer.
- mass bias in a MC-ICPMS is not fully understood and may result from a combination of factors, including sampling of ions in the plasma as well as during the formation of the aerosol (from nebulizer or laser); as a result, traditional mass fractionation laws are imperfect
- Although similar elements can be used to determine mass bias corrections in systems with only two isotopes, (e.g., Yb for Lu; Tl for Pb) the mass bias response between the two elements is not identical and must be accounted for

As for all geochemical analyses, care must be taken to preserve sample integrity from the time of collection through analysis in all steps of physical and chemical preparation. For the most accurate analysis, samples require complete dissolution followed by liquid chromatography to isolate elements of interest and eliminate isobaric interferences. For geochronologic and many tracer applications, it is necessary to "spike" with an artificially enriched isotopic tracer in order to determine concentrations and parent-daughter ratios by isotope dilution. For these applications, the sample is introduced as a solution into a spray chamber that removes the majority of the liquid from the sample and produces a fine aerosol that is injected into the plasma for ionization. The ICP source also allows a laser to be interfaced with the instrument, which allows the introduction of a laser generated aerosol into the plasma. This enables the in-situ determination of isotopic ratios in certain materials enriched in the element of interest (Sr isotopes in carbonates and plagioclase, Hf isotopes in zircon) and in some cases allows the instrument to be used for depth profiling. 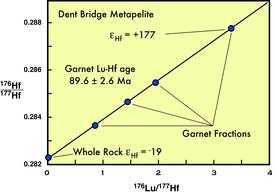 Lu-Hf garnet isochron with isotopic data generated by MC-ICPMS. Details
Measured isotope ratios must be properly corrected for all instrumental biases, including mass fractionation. Once corrected, these ratios are suitable for plotting in any diagrams requiring atomic ratios (e.g., isochron, concordia, etc.).