These instruments are designed to analyze very precisely the isotopic composition of gaseous samples. In many applications the sample preparation is an important aspect, and often the mass spectrometry is more precise than the reproducibility of sample preparation. Historically, gas source mass spectrometers are the instruments used for measuring H/D, 13C/12C, 15N/14N, 18O/16O ratios. 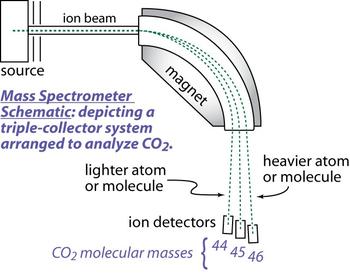 Mass Spectrometry Schematic: depicting a triple-collector system arranged to analyze CO2. Click image to enlarge. Details
The gas source mass spectrometer includes three fundamental parts, (1) a "source" of positively charged ions or molecular ions, (2) a magnetic analyzer, and (3) ion collectors. The source is a low-pressure chamber (~10-5 torr) into which sample or standard gas is ionized, either by an electron beam produced by a hot filament, or by a strong electrostatic field. Once formed, the ions are accelerated and focused by charged plates into a beam that enters a flight tube. The flight tube has a bend that coincides with an electromagnet that alters the path of the ions according to their mass/charge ratio, thus several beams leave the magnetic sector. Multiple ion detectors are arranged to collect the ion beams of interest. These collectors measure each beam as a current that can be amplified and determined with high precision.

Gas source instruments utilize one of two types of inlet systems, either a "viscous" gas flow inlet, or a "continuous" gas flow inlet. Viscous gas flow systems use a dual-inlet system that allows alternation between a "standard" gas (of known isotopic composition) and a sample gas (isotopic composition to be determined). Multiple measurements of each gas are used to calculate the isotopic composition of the sample gas. Instrumental precision of such measurements is typically greater than the sample reproducibility. Continuous gas flow systems use a carrier gas such as helium to carry the gas into the ion source chamber. An "open-split" device allows equivalent inlet conditions for both standard gas and sample gas. Continuous flow systems permit coupling of a gas chromatograph to a mass spectrometer for compound specific isotopic analysis. Viscous flow systems allow high precision analyses, but require a relatively large sample size in order to ensure viscous flow, which inhibits fractionation processes in the flow system. Only a small fraction of the gas is actually analyzed. Continuous flow systems yield lower precision analyses, but allow measurement of much smaller sample size.

A new generation of large radius SIMS instruments (secondary ion mass spectrometers) optimized for light stable isotopes are now available to augment the traditional stable isotope work done with gas source mass spectrometers. Because these are expensive to build and operate, they are likely to remain few in number. Their chief advantage is the ability to analyze small spots on minerals in situ with the same precision as conventional gas source instruments. For example, visit the Wisconsin Secondary Ion Mass Spectrometer Laboratory.

Stable isotope geochemistry is used to study so many geological processes that applications span all fields of the geosciences. Variations in bond strength and related variability in molecular vibrational modes lead to mass-dependent isotopic fractionations among different phases. This is most readily observed for light elements in which the mass differences are relatively large, for example hydrogen through oxygen, and also sulfur.

Mass-dependent fractionations result in different isotopic ratios in different compounds in equilibrium. The magnitude of isotopic fractionations depends on temperature. This is really useful! For example, the isotopic composition of precipitation depends in part on the temperature. Seawater in the open ocean has close to the same isotopic composition everywhere, but as one travels north or south from the equator, the precipitation becomes isotopically lighter. The glacial ice that has built up on Greenland from precipitation over the past 100,000 years contains a record of isotopic variation that corresponds to fluctuations in climate. Quaternary geologists read the climate history of the ice ages in the isotope record of the ice (Alley, 2002).

Stable isotopes are useful in two important ways. One is as a geochemical tracer. As elements cycle through various reservoirs of natural systems, the isotopic ratio of an element in rocks or other material can elucidate the movement of elements through these reservoirs. Secondly, stable isotope ratios of two substances can be used to constrain the temperature of their exchange, if one can assume equilibrium.

1 This is also true of cation exchange thermometers, such as garnet-biotite. The distribution coefficient approaches a value of one (i.e., no fractionation) as temperature approaches infinity.

Gas source mass spectrometry has been the principle instrument for stable isotope work of all kinds, and will continue to be for many years, although large radius SIMS instruments are available and capable of exciting new possibilities (See "how does it works" above).

Each element has its unique analytical limitations. In general, hydrogen has the largest analytical uncertainty (± 0.5-2.0???) and other light stable isotopes (C, N, O, S) are reported to within ± 0.1-0.2???. In most cases, the limiting factor in practice is sample reproducibility. That is, sample duplicates vary more than the mass spectrometer variation of a single gas sample, and thus, instrumental precision is more than adequate for most applications.

Stable isotope ratios are reported using delta notation. This notation compares the ratio of the heavier isotope to the lighter isotope in a sample to that of a standard. Because the variations are small, we multiply by 1000 and the resulting delta value is therefore in permil (???). Delta values are defined as follows:

An equivalent way to write the delta expression is:

The abundances of isotopes of the commonly used stable isotopes and the standards employed are given in Table 1. 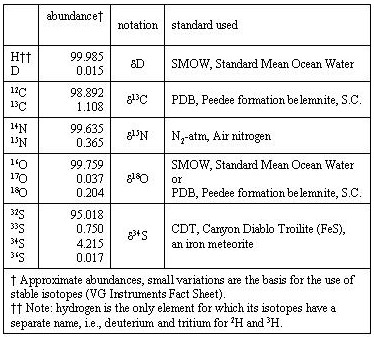