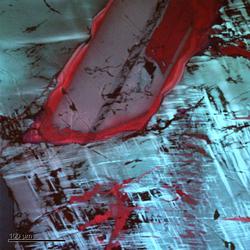 Hide
This photo is a CL image from granite (Town Mountain Granite, Llano, Texas -- ~1.12 to 1.07 billion years old) and shows two minerals intergrown with each other. The bluish cross-hatched area is occupied by a grain of potassium feldspar (microcline), and the purple red-rimmed mineral in the upper half of the image is a grain of sodium feldspar (albite).

A cathodoluminescence detector attached to a Scanning Electron Microscope (SEM), Field Emission Microscope (FEM) or an Electron Microprobe (EPMA) is capable of producing high-resolution digital cathodoluminescent (CL) images of luminescent materials. Whether this CL detector is attached to an SEM, FEM or EMPA, this mode of acquiring a CL image or CL spectrum is commonly termed SEM-CL.

The theory behind the production of the luminescent response by SEM-CL is the same as that for (Optical-CL) instrumentation (see CL theory).

SEM-CL Instrumentation - How Does It Work?

The SEM-CL operates in the same manner as a hot-cathode CL attachment to an optical system i.e. electrons are generated with a heated filament and accelerated to an anode. However, in SEM-CL there is a column under high vacuum (<10-5 Torr) in which:

Generally, the electron beam is rastered across a larger area of the sample and the CL response is recorded with digital images from the CL detector (Figure 2). The CL images can be obtained over a range of magnifications (10-10,000x), but the lowest magnification is constrained by the specific configuration of the CL detector system. The image acquisition procedure varies depending on the information that is sought. The image acquisition procedures include: 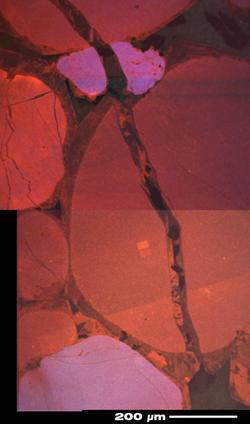 Figure 2. Color CL image of a sandstone from the Mt. Simon Fm. from northern Illinois. (color, 557 Kb). An intergranular quartz-filled microfracture cuts across several well-rounded quartz grains. The black, euhedral shapes in the center of the microfracture are crystals of barite. Figure courtesy of Rob Reed, University of Texas.
With the addition of a spectrophotometer it is possible to collect a scan of the wavelength vs. relative intensity of the CL of a given material. The CL spectra can be improved with the addition of a cold stage for the sample. In many instances the individual peaks can be related to an intrinsic structural feature in the material or a specific trace element. One of the considerations that affects the quality of SEM-CL images is the existence of phosphorescence phenomena in some important CL-active minerals. Phosphorescence is the continued emission of CL signal for a short, but significant amount of time (>10-8 seconds) after the input energy ceases. Consequently, as the electron beam rasters across a sample the phosphorescent minerals continue to emit light resulting in a streaking effect on the image. The minerals calcite, dolomite and apatite exhibit this phosphorescence phenomenon. It is possible to improve images of phosphorescent minerals by increasing the dead-time correction, but this can greatly increase the image acquisition time of the CL image. Another strategy is to use a portion of the spectrum that does not exhibit phosphorescence. For instance, because the higher wavelength portion of the spectrum exhibits the most significant amount of phosphorescence in calcite, the lower wavelength portion blue-UV has been used to image CL zoning (Reed and Milliken, 2003). The use of spectrophotometer permits a semi-quantitative view of the causes and amounts of CL. These can be related to intrinsic defects or extrinsic activators, but the magnitude of the signal has not been quantified. The spectral resolution can be considerably improved by using a cold stage.

CL emissions can provide general information on the trace elements contained in minerals or the production of mechanically induced defects in the crystals. Perhaps more importantly for the geologic context, the distribution of the CL in a material gives fundamental insights into such processes as crystal growth, replacement, deformation and provenance. These applications include: 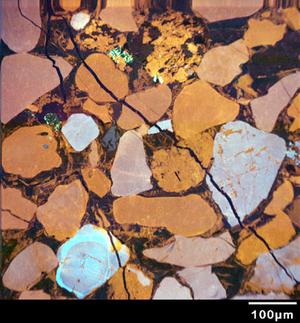 Figure 3a. Sandstone sample from unknown formation, probably Strawn, Fort Worth Basin. Mostly ankerite-filled almost macrofractures from sample RGB3932.5. A few spots (such as in the light-blue grain at the bottom) are filled with quartz, mostly macros are calcite filled. Elsewhere in the t-section there is crack-seal texture in the carbonate indicating that in this sample at least some of the carbonate is syn-kinematic. Larger fractures are carbonate-filled, smaller ones, such as the one on the center right, are quartz-filled. Image courtesy of Rob Reed, University of Texas. 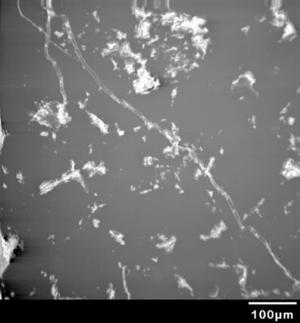 Figure 3b. Secondary electron image of the same field of view as the previous CL image. Image courtesy Rob Reed, University of Texas.

Strengths and Limitations of SEM-CL

Strengths of acquisition of CL images with the SEM-CL relative to the Optical-CL include:

Limitations of acquisition of CL images with the SEM-CL relative to the Optical-CL include:

For more detailed information regarding the theory and practice of SEM-CL, please see:

For more detailed information regarding the theory and practice of SEM-CL, please visit: