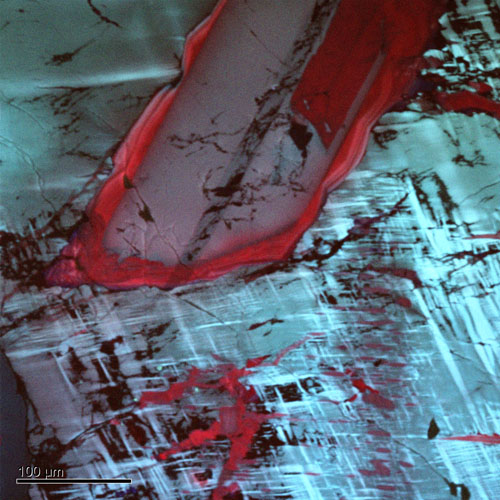 This photo is a CL image from granite (Town Mountain Granite, Llano, Texas -- ~1.12 to 1.07 billion years old) and shows two minerals intergrown with each other. The bluish cross-hatched area is occupied by a grain of potassium feldspar (microcline), and the purple red-rimmed mineral in the upper half of the image is a grain of sodium feldspar (albite). Both mineral grains grew as the granite slowly melted, cooled and crystallized. The black areas were altered by low temperature fluids that circulated through the granite after it had solidified, and may also be late filled fractures and cavities (fluid inclusions). The reddish areas probably were altered and invaded by sodium feldspar at a later time, when younger granites intruded the already solidified Town Mountain Granite and led to circulation of hot water (hydrothermal fluids) along fractures and grain boundaries.

The photo was taken with an electron microscope where an electron beam scans over the surface of the sample and, one spot at a time, excites (CL) that is recorded by a special color-sensitive detector (GATAN Chroma-CL).
Originally uploaded in Integrating Research and Education:Geochemical Instrumentation and Analysis.

Reuse
General Restrictions:
Images and other media in the National Science Foundation Multimedia Gallery are available for use in print and electronic material by NSF employees, members of the media, university staff, teachers and the general public. All media in the gallery are intended for personal, educational and nonprofit/non-commercial use only.

Images credited to the National Science Foundation, a federal agency, are in the public domain. The images were created by employees of the United States Government as part of their official duties or prepared by contractors as "works for hire" for NSF. You may freely use NSF-credited images and, at your discretion, credit NSF with a "Courtesy: National Science Foundation" notation.