Cathodoluminescence (CL) is the emission of photons of characteristic wavelengths from a material that is under high-energy electron bombardment. The electron beam is typically produced in an electron microprobe (EPMA) or scanning electron microscope (SEM-CL) or in a cathodoluminesce microscopy attachment to a petrographic microscope (Optical-CL). The nature of CL in a material is a complex function of composition, lattice structure and superimposed strain or damage on the structure of the material. Different minerals exhibit fluorescent or phosphorescent kinetic behavior which can have an effect on the quality of the CL images, depending on the manner in which the image is obtained.

Solid-state band theory provides a way to explain the luminescence phenomenon. An insulating solid material (such as quartz or calcite) can be visualized as having a valence band and a conduction band with an intervening band gap (forbidden gap). 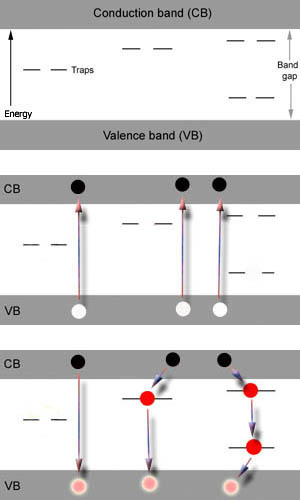 Figure 1. Generation of CL response in an insulator, as conceptualized with band theory.

If a crystal is bombarded by electrons with sufficient energy, electrons from the lower-energy valence band are promoted to the higher-energy conduction band. When the energetic electrons attempt to return to the ground state valence band, they may be temporarily trapped (on the scale of microseconds) by intrinsic (structural defects) and/or extrinsic (impurities) traps. If the energy lost when the electrons vacate the traps is emitted is in the appropriate energy/wavelength range, luminescence will result. Most of the photons fall in the visible portion of the electromagnetic spectrum (wavelengths of 400-700 nm) with some falling in the ultraviolet (UV) and infrared (IR) portions of the electromagnetic spectrum.

There are several possible ways in which the traps can interact to produce luminescence (Fig. 1). Once the electrons are excited to the conduction band they may not encounter a trap and fall to the valence band or they move randomly through the crystal structure until a trap is encountered. From that trap, the electron might return to the ground state or it may encounter multiple traps emitting photons with wavelengths dependent on the energy differences. The intensity of the CL is generally a function of the density of the traps.

In a flat sample that is > 10 µm, the resolution of a CL image will be inherently reduced because of the significantly larger depth/volume in which the CL is being excited (see electron beam interactions).

Intrinsic luminescence is characteristic of the host lattice. It can be due to non-stoichiometry (vacancies), structural imperfections (poor ordering in the crystal, radiation damage, shock damage, etc.) and impurities (non-activators that distort the lattice).

Extrinsic luminescence results from impurities in the structure. The impurities generate luminescent centers and are most commonly transition elements, rare earth elements and actinide elements (due to the occurrence of valence electrons in either "d" or "f" orbitals, see below). These impurities are generally the most common source of CL in minerals. There are several categories of interactions that influence the character of the CL. 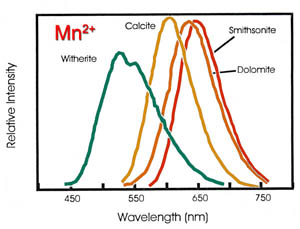 CL emissions can provide general information on the trace elements contained in minerals or the production of mechanically induced defects in the crystals. Perhaps more importantly for the geologic context, the distribution of the CL in a material gives fundamental insights into such processes as crystal growth, replacement, deformation and provenance. These applications include:

In the related field of material science, CL is commonly used to determine the occurrence and distribution of impurities in a variety of materials such as Si-wafers used in semi-conductors, in other ceramic products, and in synthetic crystals (e.g Y- and REE-doped Garnets).