Interaction of an accelerated electron beam with a sample target produces a variety of elastic and inelastic collisions between electrons and atoms within the sample. Elastic scattering changes the trajectory of the incoming beam electrons when they interact with a target sample without significant change in their kinetic energy. In this case, we can think of elastic scattering in terms of a "billiard-ball" model of small particles (electrons) colliding with large particles (atoms). Larger atoms (with a greater atomic number, Z) have a higher probability of producing an elastic collision because of their greater cross-sectional area. Consequently, the number of backscattered electrons (BSE) reaching a BSE detector is proportional to the mean atomic number of the sample. Thus, a "brighter" BSE intensity correlates with greater average Z in the sample, and "dark" areas have lower average Z. BSE images are very helpful for obtaining high-resolution compositional maps of a sample and for quickly distinguishing different phases. They are often used in conjunction with spot probe analyses by either EDS or WDS methods.

BSE detectors are commonly integrated into either an SEM or EPMA instrument. They are typically placed above the sample in the sample chamber based on the scattering geometry relative to the incident beam. BSE detectors are solid-state devices, often with separate components for simultaneous collection of back-scattered electrons in different directions. Detectors above the sample collect electrons scattered as a function of sample composition, whereas detectors placed to the side collect electrons scattered as a function of surface topography.

In most cases, a user scans a polished sample in back-scatter mode to produce a BSE image of the surface. The gain of the detector can be tuned to maximize contrast between phases with similar Z. In silicate rocks, for example, quartz and feldspars will appear dark or nearly black, Fe-Mg silicates will be brighter, and Fe-Ti oxides or rare-earth minerals will be very bright. BSE images can also be converted to false color, which often helps the human eye distinguish subtle variations by expanding the range of visible hues. 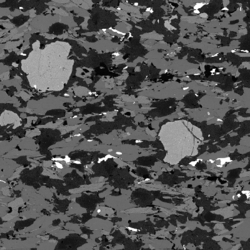 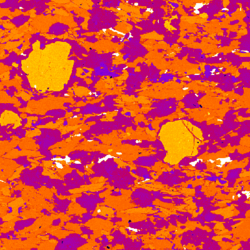