Hide
The occupancies would be 0.5 for both Fe and Mg in both sites. 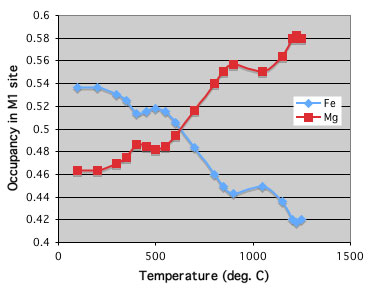 Hide
The M1 site would contain more Mg than the M2 site.

Hide
The order/disorder process is not linear with respect to T. The authors of this study suggest that several factors may be responsible for the geometries of the M1 and M2 sites: (1) vibrational entropy, (2) crystal field effects, and (3)changes in bond characteristics.