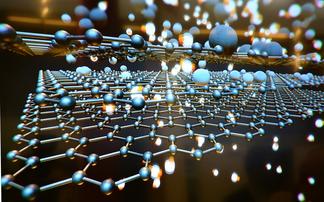 Provenance: Image by seagul from Pixabay
Reuse: Free for commercial use No attribution required. https://pixabay.com/photos/graphene-technology-2d-science-3193185/
O brave new world! The nanotechnology revolution has opened the door of possibilities to technical wonders beyond our wildest imagination. But, this also open the door to many ethical issues regarding the responsible development of nanotechnology: how are new nano-products introduced to society; how are decisions made (and by whom) regarding the development and use of these technologies; how do nano-products impact the environment and by extension human health; what are the (often irreversible) consequences of developing and using nano-products? The law of "unintended consequences" should be considered across the interests to nanotechnology and nanoscience (see Tenner, 2001 below). It is also important to consider risk (perception, minimization, mitigation) and uncertainty regarding impacts and consequences of release of engineered nanomaterials to the environment, dose/response of human exposure to nanomaterials, and the potential for nanoparticles to interfere with natural processes (e.g., application of geoengineering by way of seeding Fe in the ocean system to stimulate plankton growth, or seeding the stratosphere with sulfate aerosols to offset climate change).

The breadth and scope of nanoethics spans domains from the personal to planetary. Nanoethics issues include aspects of personal value systems (as people and scientists), and responsibilities to the profession, to society, and to planetary stewardship.

Should nanoethics be distinguished as a new branch of ethics? Many scholars such as Allhoff and Lin (2006) argue that "some [ethical] issues are emerging that appear unique to nanotechnology, namely the new environmental, health and safety (EHS) risks arising [from] nanomaterials." However, McGinn (2008, 2012) argues that these examples are simply new instances of ethical issues that are "...new instances of risks of the same sort raised by other technological materials, but they are not a new kind of ethical issue. They are new examples of a well known category of risks that various scientific and technological materials, products, and processes have posed, are posing, and will pose in the future: viz., risks to environmental safety and human health...that the nanotechnology-related ethical issues claimed to be new (and sometimes unique) amount to old ethical wine in new technological bottles". Nonetheless, the emerging fields of nanotechnology/science does appear to embrace two new important aspects to ethics (McGinn, 2010):

For reference, McGinn (2008, 2010) cite Leon Lederman: "Our lame but perhaps time-honored response is that scientific knowledge is not good or evil; it is enabling. Modern science, however abstract, is never safe. It can be used to raise mankind to new heights or literally to destroy the planet. As democratic government spreads, it is the people and their representatives who must use the power provided by science. We give you a powerful engine. You steer the ship!" (Lederman LM, The Responsibility of the scientist. NY Times, pp A15, July 24, 1999).  From McGinn (2008): "This response profile suggests that in the nanotechnology community a new paradigm of ethical responsibility in technoscientific research may be emerging to challenge the one reflected in Lederman's conventional views. Nanotechnology appears to be one of the first fields, if not the very first field, of contemporary technoscientific inquiry in which this challenge is being posed and played out. What is reasonably clear is that most NNIN respondents do not exclude nanotechnology researchers from the list of groups whose members they believe have ethical responsibilities toward society at large."

This world-view of nanotechnology researchers is very much in line with AAAS (1998, accessed at Resources for Research Ethics Education) that states, "If the U.S. is to respond effectively to the challenges of the 21 st century, we must find ways to reorganize our science and technology enterprise to

The AAAS report (March 2015), A Preliminary Inquiry Into the Perspectives of Scientists, Engineers and Health Professionals, shows a remarkable convergence in scientists' affirmation of the social responsibility among the STEM disciplines, as can be seen from the following table: 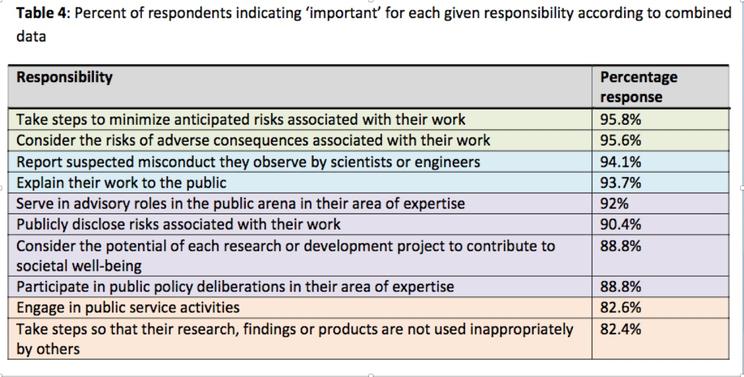 Provenance: A Preliminary Inquiry into the Perspectives of Scientists, Engineers and Health Professionals, AAAS, March 2015
Reuse: This item is offered under a Creative Commons Attribution-NonCommercial-ShareAlike license http://creativecommons.org/licenses/by-nc-sa/3.0/ You may reuse this item for non-commercial purposes as long as you provide attribution and offer any derivative works under a similar license.

Many Questions, No Concrete Answers

Many of the ethical issues that will confront nanotechnology/science will be situational, contextual, and contingent on many competing factors. It is a gray world, with no (or few) black and white answers. So, these issues have to be examined and addressed from numerous perspectives:

As nanotechnology advances, practitioners typically ask "can we do this?" Perhaps it is a better question to ask: "Should we do this? Do we have the wisdom to use and control these new technologies for the ultimate good of humanity?" (This also recalls statesman Adlai Stevenson's famous quote about unleashing the forces of the atom: "Nature is neutral. Man has wrested from nature the power to make the world a desert or make the deserts bloom. There is no evil in the atom; only in men's souls").  Perhaps we should sometimes take a bit of a step back and engage self-reflecting and self-moderating behaviors to think through potential implications and consequences.

Resources and recommended readings regarding Ethics and Nanotechnology can be accessed at:

Journal Articles and Books of Interest to Ethics and Nanotechnology/science

(This is not an exhaustive compilation-- but a place to start for explorations of ethics and nanotechnology with students in your research lab and classrooms).

Some Societal Issues Related to Nanoscience