Time-of-Flight Secondary Ion Mass Spectrometry (ToF-SIMS) is a surface-sensitive analytical method that uses a pulsed ion beam (Cs or microfocused Ga) to remove molecules from the very outermost surface of the sample. The particles are removed from atomic monolayers on the surface (secondary ions). These particles are then accelerated into a "flight tube" and their mass is determined by measuring the exact time at which they reach the detector (i.e. time-of-flight). Three operational modes are available using ToF-SIMS: surface spectroscopy, surface imaging and depth profiling. Analytical capabilities of ToF-SIMS include: 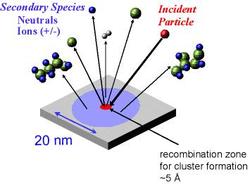 Hide
Particle beam interaction using ToF-SIMS. Incident particles bombard the surface liberating single ions (+/-) and molecular compounds. Details
ToF-SIMS uses a focused, pulsed particle beam (typically Cs or Ga) to dislodge chemical species on a materials surface. Particles produced closer to the site of impact tend to be dissociated ions (positive or negative). Secondary particles generated farther from the impact site tend to be molecular compounds, typically fragments of much larger organic macromolecules. The particles are then accelerated into a flight path on their way towards a detector. Because it is possible to measure the "time-of-flight" of the particles from the time of impact to detector on a scale of nano-seconds, it is possible to produce a mass resolution as fine as 0.00X atomic mass units (i.e. one part in a thousand of the mass of a proton). Under typical operating conditions, the results of ToF-SIMS analysis include: ToF-SIMS is also referred to as "static" SIMS because a low primary ion current is used to "tickle" the sample surface to liberate ions, molecules and molecular clusters for analysis. In contrast, "dynamic" SIMS is the method of choice for quantitative analysis because a higher primary ion current results in a faster sputtering rate and produces a much higher ion yield. Thus, dynamic SIMS creates better counting statistics for trace elements. Organic compounds are effectively destroyed by "dynamic" SIMS, and no diagnostic information is obtained. 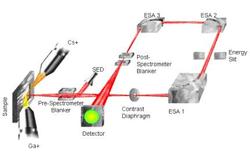 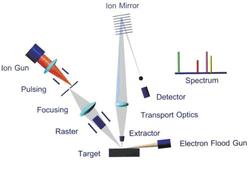 Schematic diagram of the CAMECA IonTOF ToF-SIMS instrument. Details
ToF-SIMS instruments are also equipped with a powerful computer and software for system control and analysis. One of the key features of the ToF-SIMS software is the ability to perform "retrospective" analysis, that is, every molecule from the sample detected by the system can be stored by the computer as a function of the mass and its point of origin. This allows the user to obtain chemical maps or spectra of specific regions not previously defined after the original data has been collected.

ToF-SIMS is widely used in material science disciplines in studies of materials such as polymers, pharmaceuticals, semi-conductors. The three main modes of data acquisition include: 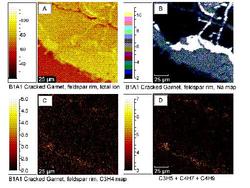 Hide
Elemental maps of total ions, Na, and organic compounds on a cracked garnet with feldspar rim. Note infiltration of Na in the garnet and organic compounds along grain boundaries. Details
In principle, ToF-SIMS is applicable to any surface-mediated reaction such as: catalysis, sorption, redox, and dissolution/precipation reactions. Only recently has ToF-SIMS been applied to geologic materials. Some examples include:

ToF-SIMS is extremely sensitive to any sample preparation treatments: there is typically a residue related to any pre-treatment of the sample, and there is always "adventitious" (or environmental) contamination in the form of compounds sorbed onto material surfaces from the atmosphere.

In general, we try to analyze samples "as received." Solid materials (e.g. mineral grains) are typically pressed into an Indium foil, which is both malleable and conducting. Any mapping of the sample prior to insertion into the sample chamber will greatly increase the ability to find and identify areas of interest. As a first step in the analytical procedure, we will typically "dust off" the surface with a very light (<1 minute) sputtering interval in an attempt to clean off any sorbed surface contamination.

An example of ToF-SIMS elemental mapping of a garnet amphibolite from the KTB deep borehole, Germany. An anastomosing network of carbon can be seen on grain boundaries and cleavage traces. From Mogk and Mathez (2000).

Na map. Note Na in the crack in the garnet. Details

Note Fe enrichment in cleavages in the hornblende. Details