Climate change further complicates Salt Lake City's water situation. Peak supply from the four creeks typically occurs in early June and is expected to shift earlier in the year, to mid-May, in the coming decades. However, peak water demand typically does not occur until late July or early August. Hence the need for significant amounts of water storage. Temperature increases over the past few decades have already resulted in more winter precipitation falling as rain, rather than snow, thus reducing snowpack. The increased proportion of precipitation falling as snow, combined with an earlier snowmelt threaten the system's ability to maintain adequate water supply through late summer. The total amount of water runoff is also expected to decrease as the climate warms. Every degree Fahrenheit of warming in the Salt Lake City region could mean a 1.8 to 6.5% drop in the annual flow of rivers that provide the city's water supply. The semi-arid region is also known to experience frequent and sometimes prolonged drought. With a growing disparity in the timing and potentially the volume of water supply/demand, clearly some changes are needed. Options currently being considered are further reductions in demand, additional water storage within the system, or extraction of groundwater.

Unfortunately, groundwater reserves are not in great shape. The shallow, unconfined aquifer underlying much of the valley is contaminated from uranium mine leachate, chloride, sulfate, iron, uranium, volatile organic compounds, and pesticides. Recent water quality testing from the shallow, unconfined aquifer found all samples to be below acceptable standards for drinking water. There is a deeper, confined aquifer that is in much better shape, with more than 80% of water meeting or exceeding water quality standards. However, excessive pumping of this aquifer has drawn down the water level by as much as 30-50 feet in places, from 1975 to 2005. 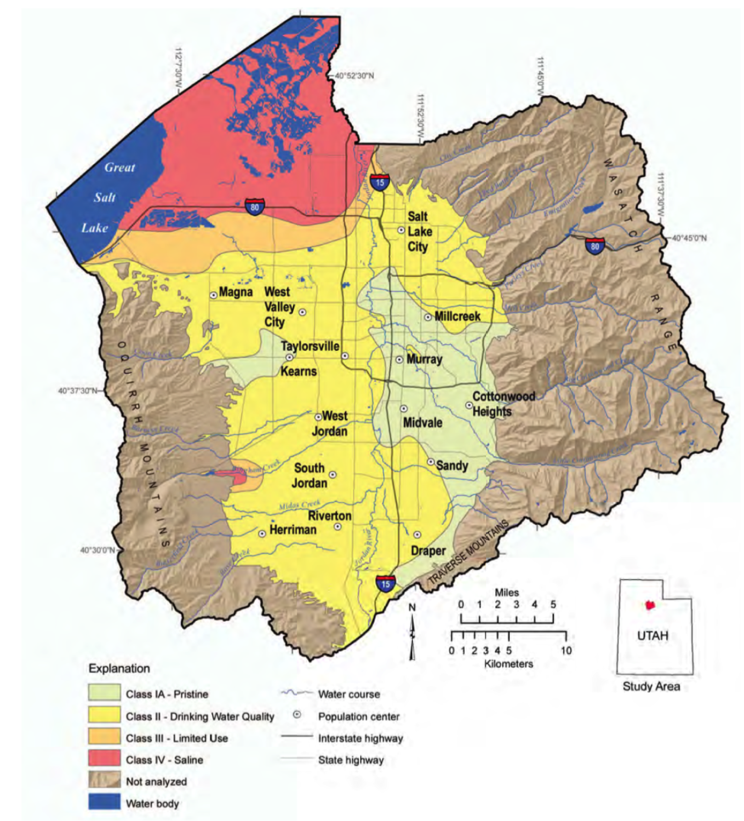 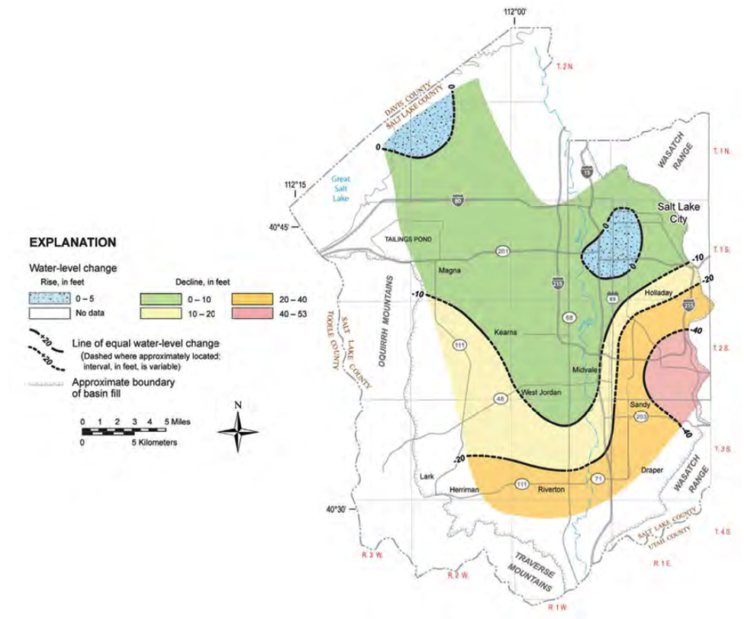 With the Great Salt Lake immediately adjacent to the city it might seem like desalination might be an option. Desalination, also called desalinization, is the process of removal of salt and other minerals to produce fresh water for consumption or irrigation. This is most commonly achieved by boiling water in a process called vacuum distillation or a process called reverse osmosis in which water is forced through a permeable membrane that strips out the salts. Either approach requires a considerable amount of energy and is therefore typically more expensive than most any other alternative. Considering that the Great Salt Lake is 3-8 times more saline than the ocean, this solution is currently not economically feasible to do on a large scale, though some desalination is currently done to treat partially saline groundwater.

People are, of course, not the only organisms that require access to clean and reliable freshwater. More than 75% of the wetlands in the state of Utah are found in Salt Lake Valley, which contain a wide variety of plant species, play an important role in regulating water quality, and provide habitat for a variety of birds, amphibians, and other animals. In addition, several threatened and endangered fish and bird species are dependent on the perennial flowing streams and rivers in the area. Water-stressed trees within the urban forest of the Greater SLC area have become more susceptible to disease. Lower precipitation in the mountains has increased the number and severity of wildfires.

Led by Mayor Ralph Becker, Salt Lake City has taken a proactive stance to adapt water resource management practices and mitigate the effects of climate change. Mitigation involves reducing the magnitude of the problem itself, whereas adaptation involves limiting one's vulnerability to expected impacts. As part of the Water Conservation Master Plan the city is attacking the problem from multiple angles. As a preventative measure, the city is purchasing and protecting large tracts of land in the watersheds that provide drinking water. SLC is also incorporating future climate scenarios into city and water development planning efforts, which is quite progressive for a state whose legislature passed a resolution in 2010 proclaiming that climate change was essentially a hoax.

The city is also attempting to bolster local resilience and reduce dependency on external sources of food, recently having passed several ordinances that promote local food production and community gardens. Also, the city is developing a water re-use program to provide water for city parks, golf courses and the urban forest.

Recognizing that energy demand is a large and growing water use sector, the city is providing incentives for individuals and businesses to minimize use of all forms of energy and invest in energy efficient upgrades. Incentives are also in place for use of solar energy (photovoltaic cells) and solar hot water heaters. The city has promoted net-zero building approaches (meaning that the amount of energy used by the building on an annual basis is roughly equal to the amount of renewable energy created on site). And they have been willing to put their money where their mouth is...SLC's Public Safety Building, completed in July 2013, is the first public safety building in the nation to be designed as a net-zero building and one of the first to meet the US Green Building Council's LEED Platinum certification criteria. Climate change scenarios are being considered in many aspects of infrastructure planning, including building roads and sewers to handle higher runoff volumes and warmer temperatures. In recognition of the progressive direction he has taken Salt Lake City Mayor Becker was appointed to President Obama's climate adaptation task force in November 2013.