Alison Hale: Using the Climate of Change Module in Foundations of Biology 2 at University of Pittsburgh-Main Campus

Explore the 'Climate
of Change' Module » 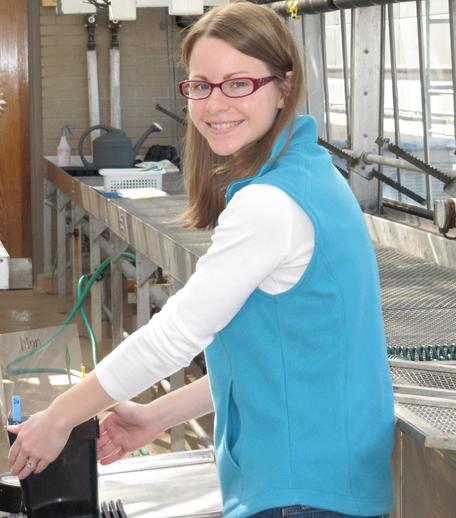 Provenance: Alison Hale, University of Pittsburgh-Main Campus
Reuse: This item is offered under a Creative Commons Attribution-NonCommercial-ShareAlike license http://creativecommons.org/licenses/by-nc-sa/3.0/ You may reuse this item for non-commercial purposes as long as you provide attribution and offer any derivative works under a similar license.

An introductory course for majors

Hide
This introductory course covers the basic principles of classical and molecular genetics, evolution and ecology. Emphasis will be placed on the experimental and observational basis for our knowledge of these subjects.

Hide
This is the second of a two-semester introductory course in biology. In this course, we will take an evolutionary and ecological perspective to understand the various mechanisms that give rise to organism structure and function. First, we will investigate how genes produce complex phenotypes. Second, we will apply the fundamental principles of evolution to understand how populations and ultimately species change over time. Next, we will study the impact of biotic and abiotic factors on the interactions of individual organisms with their environment, members of their own species, and individuals of other species. We will conclude with a discussion of Earth's biodiversity, with a special focus on conservation efforts. Throughout the course, we will emphasize the importance of data in understanding biology.

I used unit 2 from the Climate of Change module in a large lecture biology course. The recitation sections of this class are smaller and consist of ~80 students. I use recitations to engage students in hands-on learning exercises that are more difficult to implement in the large lecture setting. This module served as a linker between our class units on evolution and ecology. My students were really interested in the module - they really enjoyed that they were able to select which dataset (temperature or precipitation) they wanted to work with, the exploratory nature of the questions, and the summary table at the end of the module.

Adapting the materials for a biology course turned out to be more challenging than I initially anticipated! Fortunately, I used this module immediately after wrapping up our unit on evolution. So, I tied our study of climate anomalies into impacts on evolutionary processes in populations. I added two open-ended questions at the end of the Unit 2 assignment asking students to consider how an anomaly vs. a long-term trend would influence the process of natural selection.

My course is 15 weeks long. I implemented the module in week 10. Students had already been introduced to the topics of molecular genetics (DNA replication, transcription, translation) and evolution. The module was referenced in week 13 on their exam for the third unit in the class and again on their final exam.


I implemented unit 2.1 during one 50-min recitation period.

I pulled a map from unit 2.2 of the Climate of Change module and created a multiple choice question asking students to identify which answer was describing an anomaly that appeared on the map. I think this got at some of the data interpretation skills I was hoping to emphasize in this activity. Unfortunately, it did not link well to the relationship between climate and evolutionary processes. I would like to come up with some multiple choice questions that get at this link in the future.

1) I anticipated that the module would emphasize the skills of data analysis and interpretation to my students. This played out really nicely - the students really got into this aspect of the assignment. The data were not plotted with simple bar graphs. The maps were very complex - there were contours, color scales, longitude and latitude, and the idea of anomaly.
2) I also wanted to discuss climate as a driving force of evolutionary change in populations. Students were forced to look back at previous chapters in their textbook and remember the information on evolution, so that worked well.