Unit 2: Climate Change, After the Storm

Overview: Students apply the methods of geoscience to address a problem: "To what extent should we build or rebuild coastal communities?" There is an emphasis on analyzing and interpreting data.

Developing and Using Models: Develop and/or use a model to predict and/or describe phenomena. MS-P2.5:

Obtaining, Evaluating, and Communicating Information: Gather, read, and evaluate scientific and/or technical information from multiple authoritative sources, assessing the evidence and usefulness of each source. HS-P8.3:

Obtaining, Evaluating, and Communicating Information: Critically read scientific literature adapted for classroom use to determine the central ideas or conclusions and/or to obtain scientific and/or technical information to summarize complex evidence, concepts, processes, or information presented in a text by paraphrasing them in simpler but still accurate terms. HS-P8.1:

Obtaining, Evaluating, and Communicating Information: Communicate scientific and/or technical information or ideas (e.g. about phenomena and/or the process of development and the design and performance of a proposed process or system) in multiple formats (i.e., orally, graphically, textually, mathematically). HS-P8.5:

Constructing Explanations and Designing Solutions: Design, evaluate, and/or refine a solution to a complex real-world problem, based on scientific knowledge, student-generated sources of evidence, prioritized criteria, and tradeoff considerations. HS-P6.5:

Constructing Explanations and Designing Solutions: Construct and revise an explanation based on valid and reliable evidence obtained from a variety of sources (including students’ own investigations, models, theories, simulations, peer review) and the assumption that theories and laws that describe the natural world operate today as they did in the past and will continue to do so in the future. HS-P6.2:

Constructing Explanations and Designing Solutions: Apply scientific reasoning, theory, and/or models to link evidence to the claims to assess the extent to which the reasoning and data support the explanation or conclusion. HS-P6.4:

Systems and System Models: Models can be used to represent systems and their interactions—such as inputs, processes and outputs—and energy, matter, and information flows within systems. MS-C4.2:

Weather and Climate: Changes in the atmosphere due to human activity have increased carbon dioxide concentrations and thus affect climate. HS-ESS2.D3:

Natural Hazards: Natural hazards and other geologic events have shaped the course of human history; [they] have significantly altered the sizes of human populations and have driven human migrations. HS-ESS3.B1:

Global Climate Change: Through computer simulations and other studies, important discoveries are still being made about how the ocean, the atmosphere, and the biosphere interact and are modified in response to human activities. HS-ESS3.D2:

Earth Materials and Systems: The geological record shows that changes to global and regional climate can be caused by interactions among changes in the sun’s energy output or Earth’s orbit, tectonic events, ocean circulation, volcanic activity, glaciers, vegetation, and human activities. These changes can occur on a variety of time scales from sudden (e.g., volcanic ash clouds) to intermediate (ice ages) to very long-term tectonic cycles. HS-ESS2.A3:

Earth Materials and Systems: Earth’s systems, being dynamic and interacting, cause feedback effects that can increase or decrease the original changes. HS-ESS2.A1:

The goal of Unit 2 is for students to apply what they learned about the methods of geoscience to complete an authentic and data-rich, lab-based activity to address the following problem: "To what extent should we build or rebuild coastal communities?" Students collect, organize, and analyze spatial and temporal data (e.g., changes in sea level, ice sheet coverage, and intensity of tropical cyclone data) and visualizations (temperature forecast models under various CO2 emissions scenarios). Students also read a scientific summary report from the Intergovernmental Panel on Climate Change (IPCC). Using these sources, students identify relationships from the multiple converging lines of evidence to write an evidenced-based position paper to respond to the above problem.

By the end of Unit 2, pre-service teachers will be able to:

Unit 2 is similar to a lab activity that might be given to a high school science class or an introductory college-level geoscience course. The science content from this unit targets those students who have a limited understanding of climate change, Thus, there is no need to introduce science content prior to implementing this unit. The context of Unit 2 incorporates societal issues (e.g., costs of rebuilding coastal communities) to engage students in learning about climate change. This unit is most effective when students work in groups of two to three. Computers should be available for students so they can collect, organize, and analyze online climate data. This page provides an overview of the activity, and student handouts are available and can be modified to address individual instructor needs.

Unit 2 also aligns with the K–12 Framework for Science Education and the Next Generation Science Standards (NGSS) as indicated in the table below. Please click on the image to enlarge. 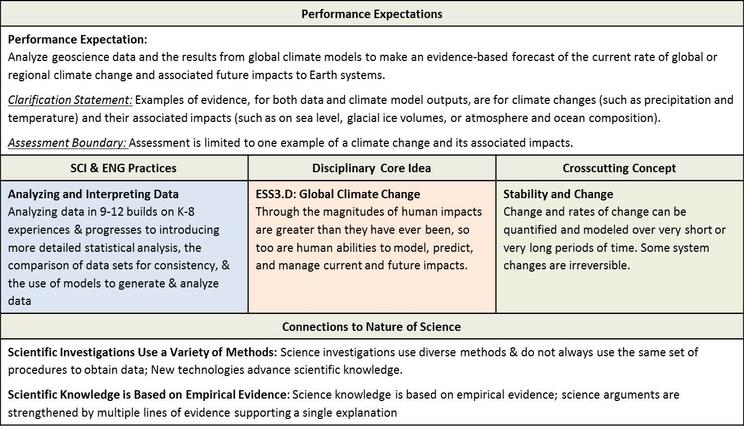 Provenance: This image was created based on the Next Generation Science Standards
Reuse: This item is offered under a Creative Commons Attribution-NonCommercial-ShareAlike license http://creativecommons.org/licenses/by-nc-sa/3.0/ You may reuse this item for non-commercial purposes as long as you provide attribution and offer any derivative works under a similar license.

In addition, Unit 2 also aligns with the following high school Common Core of State Standards (CCSS) for Reading and Writing in Science and Technical subjects, as indicated in the table below. Please click on the image to enlarge.

Provenance: Jeffrey D. Thomas, Central Connecticut State University
Reuse: This item is offered under a Creative Commons Attribution-NonCommercial-ShareAlike license http://creativecommons.org/licenses/by-nc-sa/3.0/ You may reuse this item for non-commercial purposes as long as you provide attribution and offer any derivative works under a similar license.

Activity 2 Outline (each part has its own page):

The aim for Activity 2.1 is to "hook" students by introducing them to the potential impacts of climate change on human-built systems (e.g. the impact of extreme weather events, such as hurricanes on coastal communities). Students watch a high-impact video, analyze climate change data sets, and read a compelling op-ed column.

For this activity, students use geoscience methods and systems thinking in a data-rich, interdisciplinary exploration of the human impacts of global climate change. They analyze spatial and temporal data of sea level, ice sheet extent, and hurricane intensity; and explore visualizations of future climate projections and sea level rise to identify relationships among the data. In groups, students create a concept map to depict their understandings.

During the last activity of Unit 2, students write an evidence-based position paper to respond to the problem: "To what extent should we build or rebuild coastal communities?"

Below are general teaching notes and tips for Unit 2. A more detailed description of the Teaching Notes and Tips is located in activity pages for 2.1, 2.2, and 2.3.