In this unit, students analyze and interpret groundwater data. They make predictions about what will happen to groundwater levels as human activities change, and discuss possible solutions to minimize groundwater depletion.

Constructing Explanations and Designing Solutions: Construct an explanation that includes qualitative or quantitative relationships between variables that predict(s) and/or describe(s) phenomena. MS-P6.1:

Patterns: Patterns in rates of change and other numerical relationships can provide information about natural and human designed systems MS-C1.2:

Patterns: Patterns can be used to identify cause and effect relationships. MS-C1.3:

Human Impacts on Earth Systems: Human activities have significantly altered the biosphere, sometimes damaging or destroying natural habitats and causing the extinction of other species. But changes to Earth’s environments can have different impacts (negative and positive) for different living things. MS-ESS3.C1:

Biodiversity and Humans: Changes in biodiversity can influence humans’ resources, such as food, energy, and medicines, as well as ecosystem services that humans rely on—for example, water purification and recycling. MS-LS4.D1:

Biodiversity and Humans: Humans depend on the living world for the resources and other benefits provided by biodiversity. But human activity is also having adverse impacts on biodiversity through overpopulation, overexploitation, habitat destruction, pollution, introduction of invasive species, and climate change. Thus sustaining biodiversity so that ecosystem functioning and productivity are maintained is essential to supporting and enhancing life on Earth. Sustaining biodiversity also aids humanity by preserving landscapes of recreational or inspirational value. HS-LS4.D1:

Students will utilize the desert Southwest region of the United States and the Ogallala Aquifer in a case study to evaluate issues regarding groundwater and its scarcity. Groundwater is often seen as a limitless resource in the Southwest since there is little regulation controlling the amount that is withdrawn (Rule of Capture). This mentality has led to overuse and to the dwindling supply of groundwater in many parts of the Ogallala Aquifer. This module will help students connect groundwater's role in the hydrological cycle to issues of inequity that can occur when groundwater is not properly regulated.
Used this activity? Share your experiences and modifications

Unit 6 activities support the module goals of being able to articulate the principles of environmental justice as they relate to examples of water scarcity and contamination using the Ogallala Aquifer in the United States as a case study. This unit also discusses potential solutions to inequitable access to clean water in the Ogallala. The specific learning objectives for this unit are as follows:

This unit may be used for one day of instruction in an introductory geology, environmental studies, or global change class. It can be customized to meet different classroom formats and times. The unit communicates the critical need for management of fresh water and ways in which the students may take part in its conservation. It is designed for a 50-minute course but can be modified to fit various schedules. Students should have been introduced to the concepts of environmental justice and the hydrological cycle prior to this lesson.

USGS Groundwater Activity (Microsoft Word 7.4MB Jun28 15) ( or in PDF (Acrobat (PDF) 1.1MB Mar2 15)). This activity walks students through the USGS groundwater data site and asks them to investigate groundwater depletion issues in a region of Texas. The activity addresses the current state of depleted groundwater in northwest Texas. Over the past decade, persistent droughts in northwest Texas have led farmers to pump more irrigation water from the one of the largest underground water reserves, the Ogallala Aquifer. The Ogallala Aquifer irrigates almost 30 percent of US croplands. This over-pumping has caused groundwater levels in the Ogallala to drop over 8 feet, with some counties in Texas seeing a drop of more than 15 feet in groundwater levels. Demands for agricultural products and sparse groundwater replenishment (in the form of rain) have led to a potential crisis in northwest Texas. More information regarding conservation efforts and water usage in the Ogallala Aquifer can be found by exploring the High Plains Water Districts' website.

This activity will introduce students to the USGS website for groundwater data and help them to prepare for the think-pair-share activity in the subsequent class session. An instructor's version can be downloaded here:

Activity 6.1: Think-Pair-Share: Getting the Concepts (10 min)

. These discussion questions are also found in the PowerPoint provided for activity 6.2. 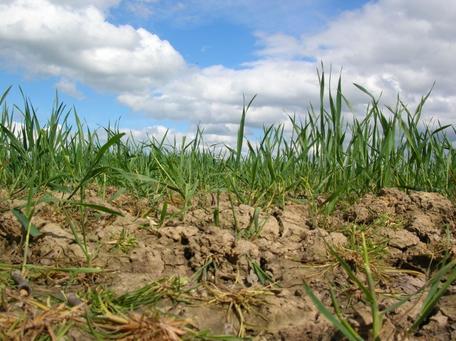 Provenance: Photo by DS Pugh, http://commons.wikimedia.org/wiki/File:Crops_in_dry_ground_-_geograph.org.uk_-_431716.jpg
Reuse: The copyright on this image is owned by DS Pugh and is licensed for reuse under the Creative Commons Attribution-ShareAlike 2.0 license.
PowerPoint presentation and integrated discussion on groundwater availability and resources.

The water conservation activity is embedded in the PowerPoint file from activity 6.2. Students will work in pairs with the each of the students reading a separate article. One student will read the Ogallala Initiative (Acrobat (PDF) 305kB Feb20 15), a fact sheet created by NRCS, designed to help landowners reduce water use. The second student will read the Ogallala Initiative Progress Report 2013 (Acrobat (PDF) 3.2MB Feb20 15). This document shows the status of the initiative, which has reduced water withdrawals from the Ogallala Aquifer by 489 billion gallons over 4 years. The Ogallala Aquifer Initiative (OAI) accounted for about 29 percent of this savings. Discussion questions are included in the PowerPoint.

As a result of completing this unit, students should be able to comprehend the use, significance, and details of groundwater resources and their own connection to these resources via their water footprint—even if they do not live in the region of the Ogallala Aquifer. Instructors may expand upon the topics discussed in this unit to help students comprehend additional groundwater issues in other parts of the United States. Some topics that can be discussed and integrated into additional assignments are: