Humans have developed methods of insect and pest control for centuries.

What chemicals were used to control pests from 1700 to the early 1900s?

Hide
ANSWER: 1750 to about 1880, insecticides from plant extracts were created to control insects, plant diseases, and weeds. Plant extracts included: Pyrethrum, a natural insecticide made from the blossoms of various chrysanthemums; Rotenone from roots of plants to control leaf-eating caterpillars. In the 1800s solutions that contained sulfur and metals, such as copper and arsenic, were created to control plant diseases and weeds. Ex.1807, copper sulfate solution was used to control disease in wheat. Copper & arsenic mixtures, in Europe and the U.S. used dilute sulfuric acid, iron sulfate, copper sulfate (blue vitriol), copper nitrate, and sodium arsenate to control broadleaf weeds in cereal crops.

When was DDT invented and what was it first used for?

Hide
ANSWER: In 1939, Paul Müller, developed DDT (dichlorodiphenyltrichloroethane) that killed the Colorado potato beetle, a major pest of potato in Europe and the US. In WWII, DDT was also used to kill lice that carried typhus and mosquitoes that carried malaria. This invention of DDT and pests it controlled earned him the Nobel Prize.

When and why was DDT banned?

Hide
ANSWER: Scientists learned that DDT bioaccumulated in the food chain (insects and their predators). They learned that birds had accumulated DDT which caused eggshell thinning, early termination of bird eggs, and decline in bird populations. In 1970s and 1980s, organochlorine compounds (e.g., DDT) were banned.

Soon after the development of DDT in 1939 and the dawn of the modern insecticide era in the 1940s, scientists began to understand that pesticides were not the silver bullet of pest control. Particularly when a pesticide or one effective pest control strategy is relied on, the control tactic acts as a strong selective force for the development of resistance to the tactic in the target pest population. With the continuous application of the same pesticide, individuals that are susceptible to the pesticide are killed, leaving the few resistant individuals that survive to reproduce a offspring that are resistant to the pesticide. See the figure below for an illustration of how frequent reliance on one insecticide can select for a resistant insect population. Further, since many early pesticides were broad spectrum pesticides, the natural enemies of agricultural pest populations were also destroyed, contributing to pest population outbreaks. 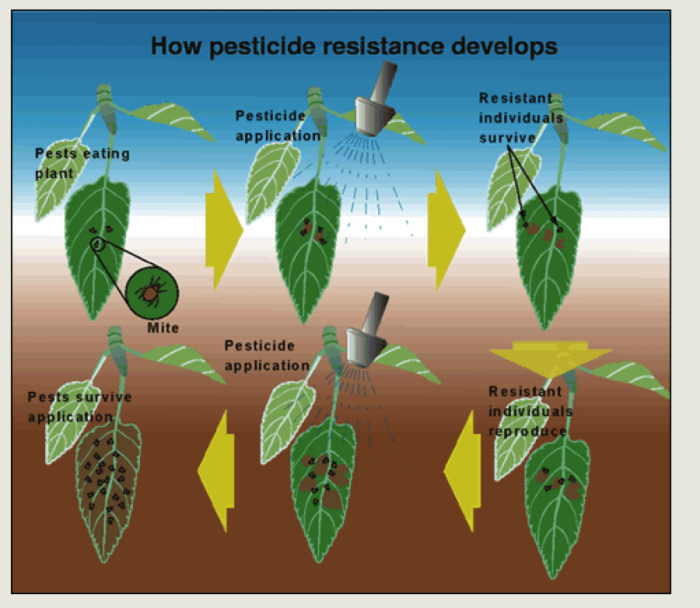 In 1984, the US Board of Agriculture of the National Academy of Sciences organized a committee to explore the science of pest resistance and strategies to address the challenge. A report called "Pesticide Resistance: Strategies and Tactics for Management" was co-authored by the Committee on Strategies for the Management of Pesticide Resistant Pest Populations and published in 1986 by the National Academies Press, Washington D.C. In Chapter 1, G. P. Georghiou (1986) documented the development of pest resistance across multiple pest organisms (see pages 17 and 28 for figure 2 and figure 8), as well as how difficult and costly it was becoming to develop cost-effective pesticides (see figures 12 and 13 on page 36).

In the report, the Committee recommended using Integrated Pest Management or IPM to reduce the evolution of pesticide resistance and provide more long-term, effective pest control. As early as 1959, a team of scientists (Stern et al.) in California had also proposed that pest control that integrated both biological and chemical control approaches, was needed to prevent pest resistance to pesticides and pest control. Stern et al. (1959) defined terms and concepts that are fundamental to IPM today.