These student materials complement the Renewable Energy and Environmental Sustainability Instructor Materials. If you would like your students to have access to the student materials, we suggest you either point them at the Student Version which omits the framing pages with information designed for faculty (and this box). Or you can download these pages in several formats that you can include in your course website or local Learning Managment System. Learn more about using, modifying, and sharing InTeGrate teaching materials.

Three common types of lamps used to illuminate are incandescent, fluorescent, and light-emitting diodes (LEDs). In this activity, students will compare the amount of heat and light generated by these lamps, assess their cost differences, and calculate the payback period.

Learning Goals: Students will be able to: 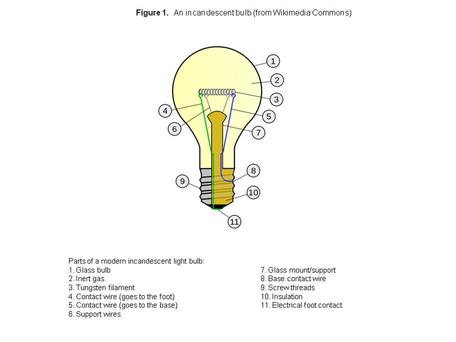 ×
Parts of an Incandescent Light Bulb

Provenance: Wikimedia Commons by Fastfission https://commons.wikimedia.org/wiki/File:Incandescent_light_bulb.svg
Reuse: This work has been released into the public domain by its author, Fastfission. This applies worldwide. In some countries this may not be legally possible; if so: Fastfission grants anyone the right to use this work for any purpose, without any conditions, unless such conditions are required by law.
Tonight you will go home and at some point turn on a light in a room. It is a common everyday action that we do not even think about until the light does not turn on. However, prior to the invention of the incandescent bulb and the arrival of electricity to our homes, lighting a room was a very different process. From the 1700s through the early 1900s, candles, gas lamps and kerosene lamps were the common methods used to provide lighting. While they functioned well, they also had the drawback of causing a fire if the lamp or candle was knocked over. Modern lighting sources are safer, more efficient, and produce more light than past methods. Today there are several ways to provide light in a room. Three common types of lamps used in home lighting include 1) the incandescent lamp; 2) the fluorescent lamp; and 3) light-emitting diodes (LED).

The incandescent lamp has been in use since the late 1800s, and although it is not a very efficient bulb, it is affordable and easy to produce. The light from an incandescent lamp is generated when a small filament of wire (made of tungsten) is heated to a high temperature (~ 3,000 to 5,500 &acirc;&#129;&deg;F), begins to glow and thereby emits light. The filament of wire is contained in the bulb that is filled with inert gases argon and nitrogen. Since its invention, the incandescent bulb has undergone several changes that have made it more efficient. For example, the early filaments were made of carbon or other materials and did not last long before burning out. When this filament breaks, the bulb is blown, thus making a slight sound when you shake it. The Energy and Independence Act of 2007 required that incandescent lamps be more energy efficient so they have been replaced by incandescent halogen lamps. Halogen lamps are more efficient because they contain an inert gas (either Iodine or Bromine) which allows the tungsten filament to reach higher temperatures (i.e. produce more light). Also the gas assists in redepositing tungsten back onto the filament giving the lamp a longer life.

The typical tube shaped fluorescent lamp has been modified and now it can fit into small fixtures. These are called compact fluorescent lights and they produce light because of the coating of phosphor along the inside of the bulb. The familiar tube of a fluorescent lamp is filled with an inert gas like argon or neon plus a small amount of mercury. When an electrical current is applied, it excites the mercury electrons, which causes them to produce light. However, because much of the light produced is actually ultraviolet, it is not visible to the human eye. That is why the tube is coated with phosphor&acirc;&#128;&#148;it will emit visible light. Because CFLs contain mercury, they need to be handled properly if they break and disposed of properly; do not just throw them away in the garbage! 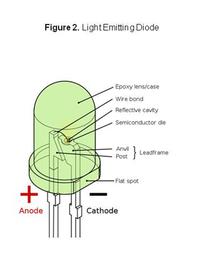 ×
Parts of a Light-Emitting Diode

Provenance: Wikimedia Commons by Inductiveload: https://commons.wikimedia.org/wiki/File:LED,_5mm,_green_(en).svg
Reuse: This item is in the public domain and maybe reused freely without restriction.
Light-emitting diodes (LEDs) are the newest lighting technology to enter the market. They are very small light bulbs that function without a filament and emit very little heat. LEDs function by having a semiconductor material that contains extra electrons and is thereby negatively charged (N-type material). A second type of semiconductor material that is positively charged (P-type material) contains "holes" that electrons can move into. By bonding the N-type and the P-type material together and then applying a current, the electrons move from the N-type material to the P-type. As they fall into the "holes" they release energy in the form of light.

When you go shopping for these types of lights (e.g. LED) rather than thinking about the wattage start thinking about the amount of light (i.e., lumens) you need. For example, to replace a 60W lamp you would look for a lamp that emitted about 800 lumens. New lamps are sold with a label that will state the brightness (in lumens), estimated annual operating costs, the life of the bulb (an estimate), its energy use (in watts) and the light appearance. The light appearance ranges from warm (2700K) which provides a warm soft white light to cool (6500K) which provides a natural or daylight appearance. 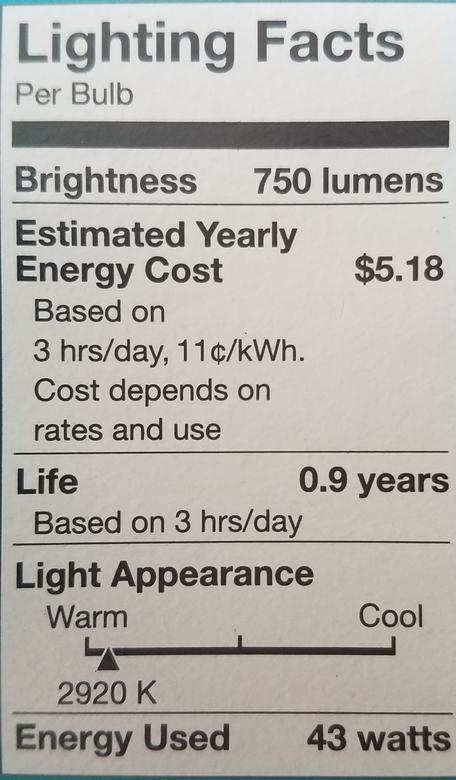 Provenance: Photo of the lighting facts for incand. lamp by M. Crawford
Reuse: This item is offered under a Creative Commons Attribution-NonCommercial-ShareAlike license http://creativecommons.org/licenses/by-nc-sa/3.0/ You may reuse this item for non-commercial purposes as long as you provide attribution and offer any derivative works under a similar license.

Using the number of lumens and watts one can calculate the efficacy of a lamp by dividing the number of lumens by watts to get lumens per watt (LPW). Lamps that have have a higher efficacy provide more light and don't use as much energy as lamps with a lower efficacy therefore you will get more for you dollar using the higher efficacy bulb. For example, the efficacy of a incandescent lamp (see the lighting facts label) rated at 750 lumens and 43 W would be 17.4 LPW but for an LED lamp rated at 800 lumens and 9.W would be it would be 84.2 LPW.

A common way of measuring how cost-efficient it is to purchase an item or, in this case, an energy-efficient appliance, is to calculate the payback period. That is how long it would take you to recover the costs of that purchase (the shorter the payback period, the better the investment). It is the amount of time it takes for the cost savings of an energy-efficient appliance to cover its purchase, installation, and operating costs.

You are living in a home where the heat pump is broken and needs to be replaced. Because you keep track of your home's energy use, you know that the annual energy costs for the existing furnace is $1,800. Now you want to know if it would be a good idea to replace the existing heat pump with an energy-efficient model. You know that the annual energy cost for the new energy-efficient furnace is $1,500, and that you plan to be in your home at least another fifteen years. The cost of purchasing a new high efficiency heat pump is about $3,000. The cost of an inefficient heat pump is $1,000.

To calculate the payback, use the following calculations:

You have just learned about three different approaches for artificial lighting. Take a few moments to consider how this all fits together. Think of each kind of lamp as a system. How are the sources of energy flowing into and out of each similar or different? Which system is the most efficient at converting electricity to light? Why? Traditional incandescent lamps are no longer sold in the United States so what are the pros and cons of choosing fluorescent versus LEDs as replacements?

Place each of the three types of lamps (incandescent, compact fluorescent, and LED) in into a test box. Plug the light into an outlet and record the light meter level and the temperature every ten minutes for forty minutes. Air out the box so it can cool to room temperature between bulb changes. You can use this handout to record results: Lab Sheet Handout (Microsoft Word 16kB Oct29 17)

1. Discuss the results from the above experiment. Which lamp do you think is the most efficient, and why? Rank them in terms of their ratio of light to temperature &acirc;&#128;&#148; how much more efficient is the best-performing bulb compared to the worst-performing bulb? Which bulb would be best to use in a house in which you were trying to reduce the cost of cooling, and why?

2. The cost of using any electrical appliance is its wattage multiplied by the price of electricity multiplied by the amount of time the appliance is used. Find out how much a it costs for a kilowatt hour in your area; calculate how much it costs to run the bulb for a year if it is on for five hours every day. Once you know how much it costs to operate the bulb for a year, determine the payback period for:

3. Based on the information you collected in questions one and two, why do you think LEDs and fluorescent bulbs are not more common in households?