These student materials complement the Coastal Processes, Hazards and Society Instructor Materials. If you would like your students to have access to the student materials, we suggest you either point them at the Student Version which omits the framing pages with information designed for faculty (and this box). Or you can download these pages in several formats that you can include in your course website or local Learning Managment System. Learn more about using, modifying, and sharing InTeGrate teaching materials.

So given warming since the Holocene began 11,000 years ago, what has the rate of sea level rise been?

Establishing a sea level curve for the Holocene has been a global effort. Datasets include instrumental data records (for a time of only about two centuries), and a growing number of proxy records that include:

Entire journals are even dedicated to investigating the details of our most recent period of sea level rise.

In order for us to connect sea level with our discussion on global temperature, solar output, etc. let's see a dataset that links climate history with sea level. The image below (Figure 4.30) shows warm and cool periods for the last 900,000 years and has an expanded inset for the last 140,000 years. You can compare the inset to the Vostok ice core dataset case study above to see if there are any similarities/differences. 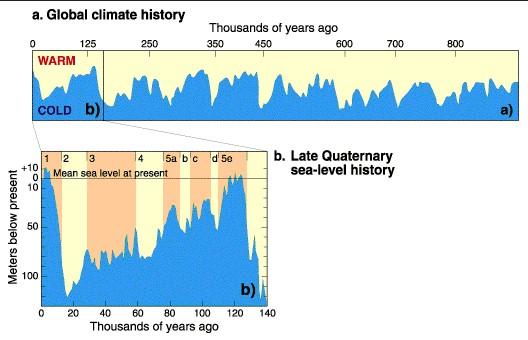 ×
Figure 4.30: Eustatic sea level curve for the last million years. Sea levels are plotted relative to modern Mean sea level. As you can observe in these graphs, sea level has been highly variable and "periodic" with sea levels higher during warm periods and low during cold periods. In fact, sea levels about 18,000 years ago were as much as 120 meters below present.
Credit: NOAA: PaleoClimatology

In the inset (Figure 4.30b), you will notice the long-term decline in sea levels from the last interglacial warm period which occurred about 130 ky before present. It is labeled stage 5e on the graphic. Sea levels declined to the lowest levels during stage 2 that occurred between 13,000 and 20,000 years ago. During this time, despite some minor short-term rise/fall events, sea levels fell from near modern sea levels to some 120 meters below present. The long-term rate of sea level fall (linear regression) can be calculated precisely (you might want to do some calculations for yourself), but a quick calculation shows that sea levels fell 120 meters in approximately 100,000 years or 0.12 m / 100 years. That is, sea levels fell by some 12 cm per 100 years, or through a simple unit conversion the rate can be stated as 1.2 mm/year.

In the same graph, sea level rise appears to have been occurring at least for the last 18,000 years. Modern sea levels (relatively similar to highs 120,000 years ago) were achieved quite rapidly, relative to the rate of fall. Again based on these numbers, 120 meters of sea level rise appears to have occurred in 18,000 years. This represents a rate of almost 6 mm/year for a rise rate. Now, we know that there are likely some errors in our calculations used to determine the rates of sea level change. We also know from other datasets that the trend isn't constant or the same everywhere, so we will take a look at that (see below).

Nevertheless, this asymmetrical pattern of sea level rise/fall rates is repeated again and again for many of the earlier glacial-interglacial episodes. Thus, there is evidence that shows sea level fall (and building of ice sheets) is a long, drawn out process where cooling and various positive feedback loops help to reinforce the cooling. The end result is an extended period of sea level fall (i.e., iteratively more albedo, and less and less insolation delivery, more cooling, etc.).

Conversely, once the factors that initiate warming begin to turn on, warming and associated sea level rise apparently can proceed at a much faster rate until a maximum sea level is reached and factors that influence cooling initiate and bring sea levels down again.

Prior to the last few centuries, the system was controlled primarily by extrinsic and intrinsic variables. However, human impacts on landscapes, oceans, and climate (i.e., deforestation, greenhouse gas concentrations, nutrient runoff, aerosol pollution and cloud development, etc) have added variables that weren't present at any previous time (more on this later in the course).

Now, let's take a look at a couple of more composite analyses that help us look at signals and signatures from the last few 1000 years. In the graphic below (Figure 4.31), a number of different datasets from Australia, South America, the Caribbean, the western Pacific, and other areas have been plotted to show sea level positions. Most of these datasets are derived from investigations of coral reefs that have drowned as sea level has risen. 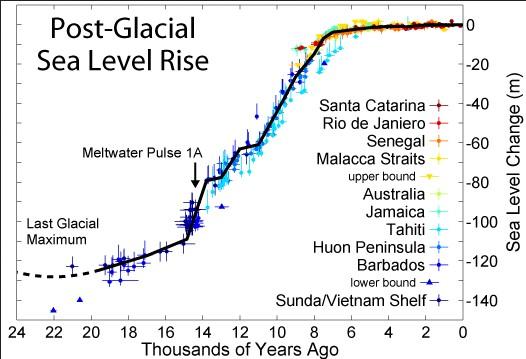 Figure 4.31: Holocene Sea‐Level curve showing the most recent period of rise and warming. Data is the same as in Figure 4.30, but at a higher resolution. Some of these data suggest that sea‐levels approached modern around 6,000 years ago, but may have actually exceeded modern sea‐levels in some regions (i.e., Malacca), but, on average, sea levels have been relatively slow to rise and have been fairly stable for at least the last few thousand years.

Check out this website for more info on Laurentide Ice sheet decay.

As these large ice sheets and their albedo potential was removed, the rate of absorbance of incoming solar radiation was likely to have contributed to further warming and increased temperatures of seawater. Thus, geoscientists are increasingly confident in the two primary factors that have contributed to the sea level rise rate prior to human influences. The primary cause is thought to be tied to thermal expansion of seawater as we discussed previously. The second is the role of melting glaciers and increased volumes of land-ice being moved to the oceans. We can debate relative roles of each factor, but the outcome regardless was higher sea levels.