This week's investigation integrates all three Eyes in the Sky tools—ImageJ, AEJEE &amp; ArcGIS, and Google Earth—to study the migration of sea turtles. We'll start out by visiting a familiar data provider, the NASA Earth Observations (NEO) Web site, to download images of global Sea Surface Temperature and Chlorophyll Concentration. Later, you'll use other Eyes in the Sky tools to see if the sea turtle migrations are related to these data in any way.

IMPORTANT—A bug in ImageJ prior to version 1.43p prevents you from entering negative calibration values. Before you begin working with ImageJ, please update your copy of ImageJ to the current version (1.43u). To update ImageJ, choose Help &gt; Update ImageJ and click OK in the updater dialog box. ImageJ will download and install the update, then quit. Re-launch ImageJ to run the new version.

Windows Vista and Windows 7 users—ImageJ's built-in update function only works if you install ImageJ in the Documents directory, instead of the Programs directory. If you are unable to update ImageJ, you will need to re-install the program according to these guidelines. 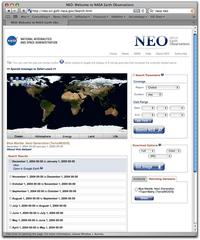 Show me where to click to read about the SST dataset 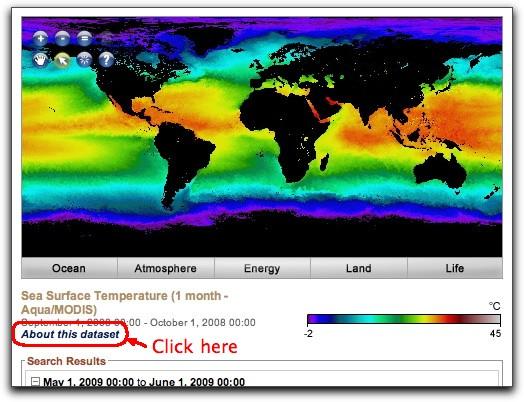 
If you have difficulty downloading the September 2008 SST image file from NEO, download and use this one instead. Right-click (Win) or control-click (Mac) the link below and download it to your Week 12 folder or directory:

This week, you'll learn how to density calibrate an image. In density calibrated images, pixel values are converted to real world measures such as reflectance, temperature, Dobson units, or whatever the detector was designed to measure. 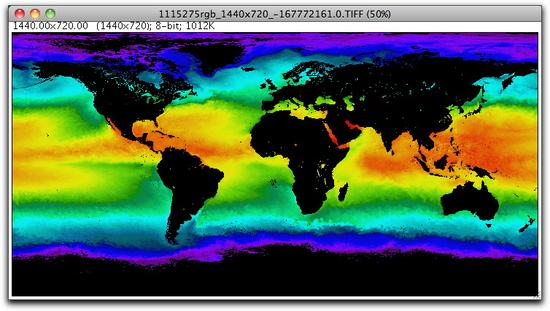 Show me where to read pixel values in ImageJ

Hide
The value assigned to pixels that represent land or missing data is 255. Therefore, temperatures are represented by pixel values 1 through 254.

Where do calibration values come from?

To density calibrate a digital image, you need to have at least two known measurements and their corresponding pixel values. You also need to know the mathematical relationship between the two—is it linear? polynomial? exponential? With sea surface temperature, this translates into "What do you have to do, mathematically, to change a pixel value into a temperature value?" You also need to know the units of measure. Is the temperature reported in degrees Fahrenheit or degrees Celsius?

In a perfect world, this information would always be provided in a standard format. However, in the real world, you need to get the calibration information any way you can. The information is out there somewhere, but you can't always easily find it. Don't let that stop you from trying!

In this case, we will look at the legend below the preview image in the NEO interface. For the SST images, it's always the same, and looks like this:

Calibration information can also be provided by a mathematical formula or through descriptive text. In an image where pixel value represents elevation, you might get your calibration information—the elevations of two known locations in the scene—from Google Earth or a topographic map. Like spatial calibration, density calibration often involves a lot of detective work and intuition or "educated guessing."

Now you will use this information to calibrate the SST image.

Show me where to read the calibrated pixel values 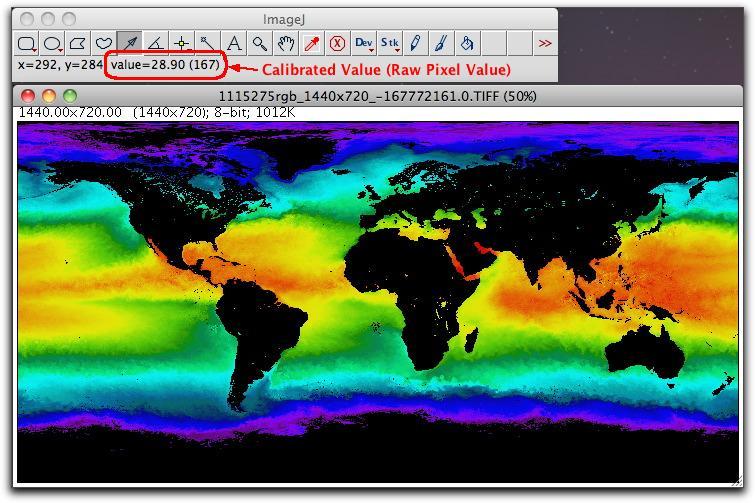 Now that you have a calibrated image, let's take a brief look at some of the tools provided by ImageJ to analyze the image.

Choosing which measurements to make

Before starting any analysis in ImageJ, you need to choose which measurements you will make.

A quick way to analyze all of the data in an image is to create a histogram. A histogram is a graph that shows the frequency (the number of pixels) of each value. The Histogram window also includes basic statistical values, such as mean, median, and mode—in calibrated units, if the image has been density calibrated.

A related technique—saving a region of interest (ROI)

What if we wanted to measure exactly the same area (called a Region of Interest, or ROI) on many images, especially on different days. You can save a selection as a region of interest (.roi) file in ImageJ.

A density profile plot shows how a quantity varies along a path.

Add a calibration bar to an image

Earlier in this course, you learned how to spatially calibrate and add a scale bar to an image. You can also add a density calibration bar, or legend, to an image.

This section is kind of a test to see if you can apply what you've learned on this page, but with a new wrinkle. Your task is to locate and download the September 2008 MODIS Chlorophyll Concentration image in NEO, then to density calibrate it. The new wrinkle is that the range of Chlorophyll Concentration values is so broad—ranging from about 0.015 milligrams per cubic meter (mg/m3) to around 64 mg/m3—that a linear calibration would not show much color variation on the map.

Notice the color legend for this image. The scale is obviously not linear. In fact, it appears to be exponential, with low values at the bottom (left) end and a sudden increase to high values at the top (right) end of the scale.

These SST and Chlorophyll images have different color lookup tables and are calibrated differently. If you stack them the way they are now, both images will be assigned the LUT of the first image in the stack. (In other words, the Chlorophyll image will look lousy.) To stack these images, you first need to convert them to a common format—RGB color.

As you flip back and forth between the SST and Chlorophyll images, look for interesting patterns or relationships between the ocean's temperature and chlorophyll concentration.

Remember from earlier in the course that ImageJ is also useful for examining and animating a series of images that show change over time.

If your computer has enough memory, here's one last trick you can try...

While you can add these images as layers to AEJEE, ArcGIS, and Google Earth and can turn the layers on and off to see the changes in SST, these tools generally don't change the images as smoothly as you can with an ImageJ stack.