On the GIS pages for this week, you use GIS shapefiles and image files to investigate the movement of olive ridley sea turtles. The Sea Surface Temperature and Chlorophyll Concentration images were downloaded from the NASA NEO Web site in Geotiff format. An image in Geotiff format contain geographic information embedded in its header. It is "geographically smart". That is, when loaded into a GIS, it is positioned so that other data files line up and layer onto it appropriately. When an image is not in Geotiff format, special files need to be created to direct the placement of the image. Otherwise, the result can be an image that is out of place, such as a satellite image of the Mississippi River ending up in Africa!

This map shows countries of the world layered onto the 2008 Sea Surface Temperature and Chlorophyll Concentration images downloaded from NASA NEO. 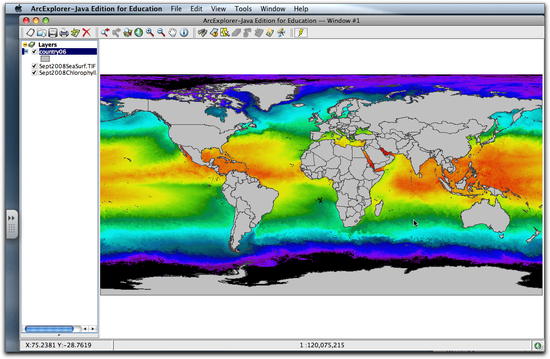