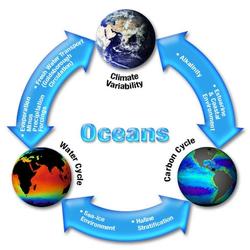 Click image to enlarge. Image source: NASA
Oceans are a major part of NASA's mission to understand the Earth system. They cover more than 70% of Earth's surface and make up more than 99% of the planet's living space. Oceans provide food, natural resources, recreation, and a means for transporting people and goods. Oceans also regulate regional and global climate.

In the past, scientists had to rely on in situ measurements from ships, buoys, and drifters to study the ocean. These measurements were infrequent at best and could not provide the spatial coverage necessary to truly characterize the complexity and diversity of the oceans. Now, remotely sensed satellite data and computer models enable scientists to make global maps of seasonal changes in ocean surface topography, currents, waves, winds, phytoplankton content, sea-ice extent, rainfall, sunlight reaching the sea, and sea surface temperature.

2010 will bring the launch of the Aquarius satellite, the first remote sensing mission with the ability to measure sea surface salinity (SSS). Changes in ocean salinity (saltiness) have the potential to cause significant changes in Earth's water cycle, ocean circulation, and climate. According to Aquarius project scientist Dr. Yi Chao of NASA's Jet Propulsion Laboratory, this mission will have "a flavor of discovery." "We consider monitoring salinity from space to be a missing piece of the ocean and climate puzzle," Chao says. "Without Aquarius, we would not have the needed dataset to study, understand and ultimately predict the global water cycle, ocean circulation and its impact on climate." 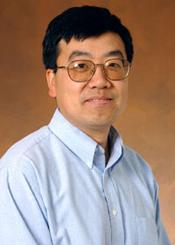 NASA scientist, Dr. Yi Chao. Image source: NASA
Dr. Chao's work as a principal scientist at JPL and an Adjunct Professor in the Department of Atmospheric and Oceanic Sciences at UCLA, focuses on satellite oceanography and ocean modeling and forecasting. He is part of the Our Ocean project, whose goal is to create a single portal through which a wide variety of users can easily access ocean science data, run ocean models, and visualize both data and models. Dr. Chao is also a member of the TOPP (Tagging of Pacific Predators) team, working to attach satellite tags to 22 different species of top predators that roam the Pacific Ocean as part of the Census of Marine Life's effort to understand the diversity and abundance of past, present, and future life in the oceans.

NASA has been using satellites to study oceans from space since 1978. In just over 100 days of operation, Seasat, the first civilian oceanographic satellite, collected the same amount of data as had been acquired by ships in the previous 100 years. Today, there are several ocean-observing satellite missions, measuring topography, wind, temperature, and more. With each new ocean-observing satellite mission, scientists like Yi Chao learn more about the roles different parameters play in the dynamic conditions and cycles of the oceans, and the impact these parameters have on climate and weather.