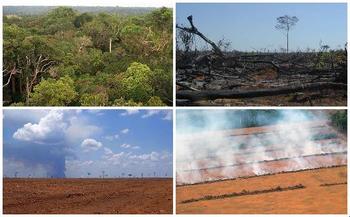 Deforestation occurs for many different reasons. Building roads, creating open land for agriculture and livestock, harvesting lumber, and urban sprawl are among the most common causes of deforestation. Wildfires and overgrazing can also contribute to lack of new forest growth. Much like the benefits of tropical forests, the impacts of deforestation are felt all around the world. Deforestation has been linked to social conflict, economic losses, decreased plant and animal habitat and biodiversity, soil infertility, changes in precipitation patterns, and global climate change. 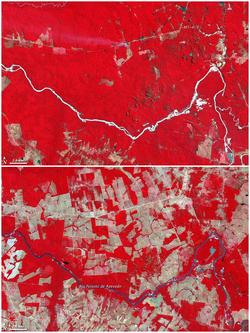 Part of Mato Grosso, Brazil on August 6, 1992, captured by the Thematic Mapper on NASA's Landsat 5 satellite (top) and the same area on July 28, 2006, captured by the ASTER instrument on NASA's Terra satellite (bottom).
Satellite technology is one of the key components in the effort to monitor, study, and limit the extent of deforestation. The images to the right are false-color satellite images showing changes in vegetation in the Mato Gosso region of Brazil. In these images, red indicates vegetation, and the brightness of the color indicates the density of the vegetation. The most striking difference between the two images is the widespread clearing of forests—seen as gray-beige rectangles—that occurred between 1992 and 2006.


Satellites allow scientists to observe large tracts of land over long periods of time. Using the Landsat satellites, NASA has been documenting deforestation and land cover changes in the Amazon since the 1970s. Ecosystem models and data from the Moderate Resolution Imaging Spectroradiometer (MODIS) instrument aboard the Terra and Aqua satellites help scientists understand time variations in the exchange of carbon between forests and the atmosphere. Satellite data are also used to study how aerosols from fires, like the ones that are used to clear forested areas, impact climate and weather.

Satellite observations of tropical forests are made at multiple wavelengths. NASA has developed hyperspectral sensors for observing over 200 closely spaced wavelengths of light reflected from tropical forests. Unlike multispectral sensors that detect electromagnetic energy in broad groups of wavelengths, a hyperspectral sensor detects hundreds of narrow, contiguous slices of the spectrum, so that there are no gaps in coverage. The most effective wavelengths for studying vegetation are those at the red end of the visible spectrum or longer. Red wavelengths are used to measure "greenness" since healthy plants will absorb red (and near infrared) wavelengths for photosynthesis, and stressed plants will reflect more of those wavelengths back into space. Even longer wavelengths (e.g., microwave and radar) are able to penetrate clouds and haze to observe the rainforests below and monitor changes in land cover and usage. Use the resources below to learn more about tropical forests, deforestation, and the use of satellites to monitor and control the damage.