(Geologic) Timing Is Everything!

Part A: The History of Earth

How can scientists determine when geologic events occurred in the 4.6 billion year history of our planet? One way to figure out relative age is by a process called superposition. This principle says that lower rock layers (and fossils in them) are older than higher ones, unless there is evidence that the layers have been overturned. This makes perfect sense since the lower sediments would have been deposited first. 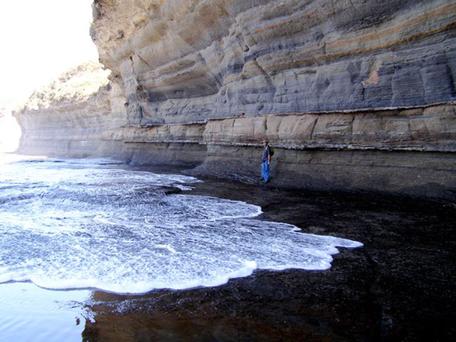 ×
The fossils in the bottom layer or rock are older than the ones found in layers above. Source: Wikipedia Images

Rock layers can be compared, or correlated, with each other based on their mineral composition, fossil content, and other features. When a rock unit or series matches those of another area, they are said to be correlated and considered to be of similar age. Ages of sections of sediment cores can be correlated by comparing their fossil assemblage. Index fossils is a fossil of an organism known to have existed for a relatively short period of time, used to date the rock in which it is found. are particularly useful. They are fossils of organisms that lived for a relatively short period of time. Good index fossils are easily recognized and widely distributed around the world, so samples of rocks and sediments from all over the world can be compared and dated.

×
Index fossils can be used to date rock strata once the period of time the organism existed is known. Source: USGS

Scientists determine exact ages of rocks and sediments in labs on shore by measuring the amounts of different radioactive isotopes one of two (or more) atoms of the same element which only differ in the number of neutrons found within its nucleus. e.g. H1 (no neutrons) and H2 (1 neutron), H3 (2 neutrons) contained within certain minerals in the sediment cores. What is an isotope? Isotopes are elements, meaning they have a specific chemical identity due the number of protons they contain, but their masses vary because they have a different number of neutrons. For example, all isotopes of oxygen contain 8 protons, but they can have 8, 9, or 10 neutrons in the nucleus (16O, 17O, and 18O). Oxygen-16 is a stable isotope and is the oxygen we breathe. The other two isotopes are also stable but have additional neutrons.

×
The 3 isotopes of oxygen. Source: TERC/Lenni Armstrong
Many isotopes are unstable and are radioactive. These isotopes decay at different rates, making them useful for determining the ages of different materials. Expedition 341 scientists will refine the ages of sediment cores by using the radioactive isotope Potassium-40 (40K) to date minerals within layers of volcanic ash. Over time, Potassium-40 (40K) slowly decays into stable Argon-40. By measuring the ratio of 40K /40Ar in a mineral, the age of the sediment can be determined. It takes approximately 1.3 billion years for half of the K40 in a sample to decay 40Ar, so K-Ar dating is useful for determining the age of rocks that are more than 100,000 years old. The amount of time for half of a radioactive isotope to decay is called the half life the time it takes for half the atoms in a radioactive substance to decay. of the isotope.

For younger sediments, up to 50,000 years old, scientists use the change in the amount of carbon 14 contained in in the sediments to date them. Organic matter like pollen a fine powder produced by flowers that fertilizes other plants for reproduction. and foraminfera a type of zooplankton, a single-celled marine organism. (and humans!) absorb 14C from the atmosphere. When a sediment is deposited, it stops absorbing 14C since it is no longer exposed to the atmosphere. Like Potassium-40, 14C is a radioactive isotope, so it slowly decays into stable carbon (12C) with a half life of 5,500 years.

2: Potassium-Argon dating could be used to determine the age of which of the following materials?.

Mammoths became extinct about 10,000 years ago.

Carbon 14 would be a better choice to date objects like clothing that are only a few thousand years old.

1. Obtain one set of Earth History Timeline Cards for your group or download them here. (Microsoft Word 2007 (.docx) 74kB Nov8 14) Do your best to put them in sequence from the oldest to the most recent events.

3. If any events were out of sequence, reposition them so your cards are in the correct order.

4. Your teacher will gather all the Timeline Cards and will then redistribute one set, so that your group only has a few cards. On the back of each Timeline Card you are given, write how many million years ago (MYA) the event occurred. This information is on the Timeline Organizer sheet.

5. Read Understanding the Timeline Model, below.

6. With your class, examine the placement of each of the cards on the timeline, and discuss the event's role in Earth's history.

Our solar system has existed for approximately 4.6 billion years. That entire span of time can be captured in a timeline just 4.6 meters long! In such a timeline, 1 millimeter equals 1 million years.

1. What is most surprising to you about the timing of events that have occurred throughout Earth's 4.6 billion-year history?

2. Which event on Earth's timeline do you think is most significant in allowing for the occurrence and evolution of life on Earth, including the rise of Homo sapiens?