The lab activity was developed by Jeff Lockwood of TERC and Alison Mote of the Ann Richards School for Young Women Leaders for the EarthLabs project.

In this activity, students put their observational skills to work as they take on the role of sedimentologists in the core description lab. In addition to visual descriptive information, they use proxy data, including microfossils, and Earth's paleomagnetic record to determine the ages of the sediments as they build evidence to interpret changes in Earth's past climate. They use actual core data collected during Expedition 341.

By the end of this Lab, students should be able to: 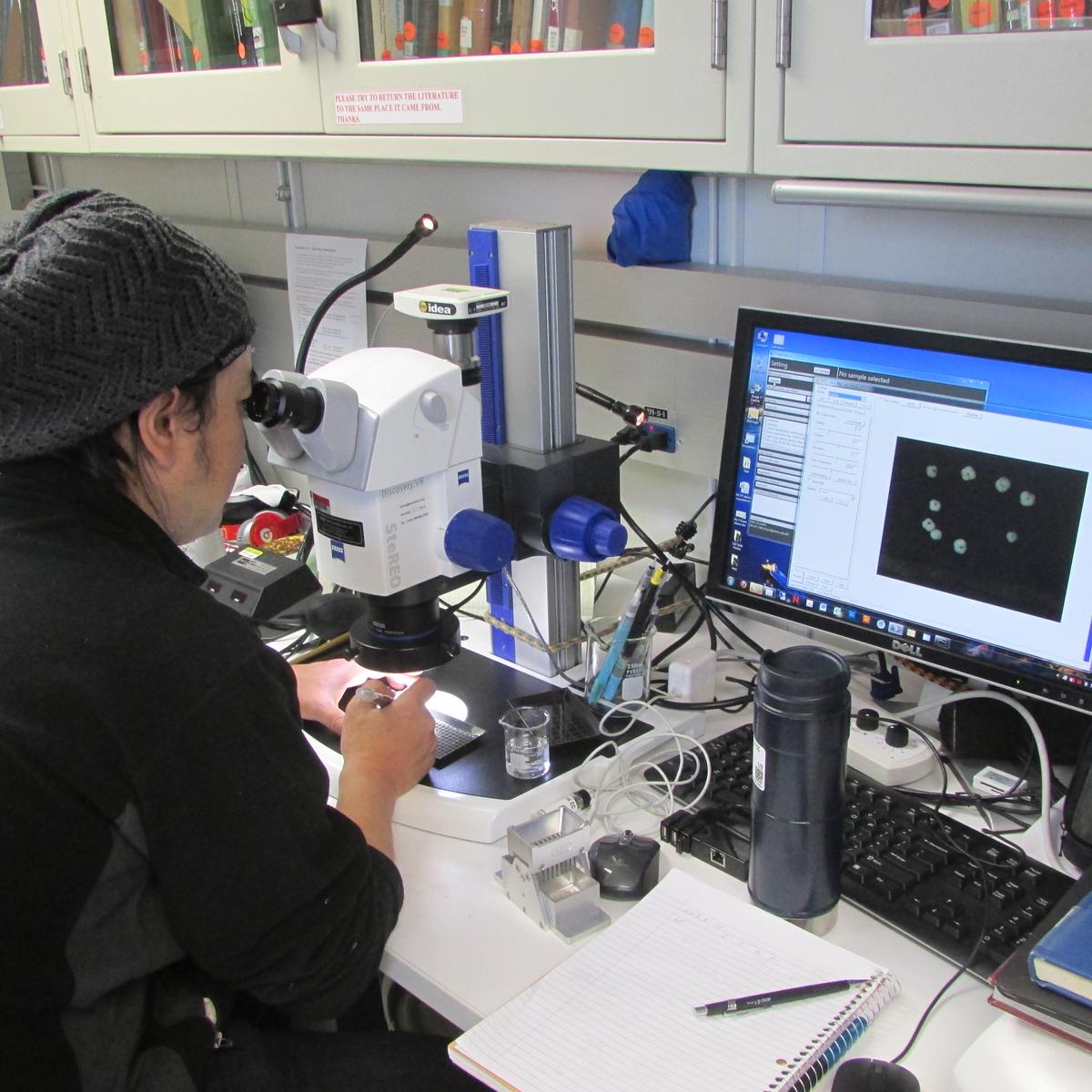 In Part A: In order to analyze core features in Parts C - E, students explore a Core Description Glossary. The glossary details the nature of different core features and what the presence of these features means in terms of climate and climate change. Students fill out a table that they will consult later on in the activity. The table has the following columns:

In Part B: Students use "The Core Lab" visualization to examine sedimentary features of core U1417B. They use the series of features to make a hypothesis: What was the climate like in S. Alaska during the time the sediments were being deposited?

In Part C: Students gather evidence to support their hypothesis. They interpret paleomagnetic data collected during Expedition 341 to determine the approximate age of the sedimentary core sequence from 260 to 360 meters below the seafloor. Students then tie the information back to their Miocene Timeline.

In Part D: Students continue to assemble evidence to support their hypothesis by again using the "The Core Lab" visualization. This time they examine microfossils found at different points in the sediment column. Then they estimate the relative ages of the sediments from site U1417 B based on microfossil and paleomagnetic data they have collected. Does this estimate agree with their findings in Part C?

In Part E: Students assemble their data and evidence to draw some conclusions about the climate and climate changes in the S. Alaska region during the time the sediments were deposited. They add information about how oxygen isotopes can be used to predict what temperatures on Earth were millions of years ago. Students end the module by preparing a short presentation of their findings. Their report is prepared by using the point of view, and the evidence collected by, four types of scientists:

What you need to prepare ahead of time, and general recommendations for classroom implementation, as well as guidelines and facilitation tips for leading class discussions.

In this culminating activity, students should work in teams of 4 to analyze real data from Expedition 341 to make an interpretation about the Earth's past climate. Each student will become an expert in their field as they take on the role of a different member of the science party. Assign the following roles before students begin Lab 6: Sedimentologist, Paleontologist, Paleomagnetist, and Chief Scientist (i.e. the group leader). Students will be challenged to present their findings to the science party (i.e. the rest of the class) at the conclusion of this lab. Check for understanding to make sure that each group member understands what their role is before beginning the lab.

Students should use their prior knowledge to make a prediction of the types of sediments that might be deposited in deep v. shallow ocean water. Encourage students to look back at previous labs in the sequence if they are having difficulty making their predictions. They should recall from Lab 4 that the energy of water (fast v. slow moving currents) affects the size of sediment particles that are deposited in the ocean. They should also recall that more sediments will be deposited in the ocean during periods of glacial advance due to the erosional power of glaciers (Lab 3). Encourage students to discuss their predictions with their team and remind them that there is no wrong answer. They will be gathering evidence to test their predictions as they work through the different parts of this lab.

The "Core Description Glossary" depicts a variety of sedimentary features present in cores from the Gulf of Alaska. To save paper, you may want to have students view the glossary in pairs on the computer. If printed, you will need to make at least one color copy per group. Alternatively, you could print one color copy and post each page around the room (or on different tables) so that students can visit different stations to obtain the information. There are 7 different types of sedimentary features depicted in the glossary: 1) Typical deep water sediments in the Gulf of Alaska (e.g. mud); 2) Evidence for changing energy conditions; 3) Evidence for life at the sea surface; 4) Evidence for life on the sea floor; 5 and 6) Evidence for ice on land and in the ocean; and 7) Evidence for volcanic eruptions.

Students do not need to describe every section of the core; the goal is to get an overall picture of how environmental conditions on Earth were changing and the position in the core that these changes can be observed. Students should notice that the types of sedimentary features start to change at 147.5 cm - 156 cm where a dropstone is present. This feature and features such as ice rafted debris in younger sediments provide evidence for colder climatic conditions. Below this section of core (from 156.5 cm - 282.5 cm, in older sediments) the core is heavily bioturbated which provides evidence for an abundance of life on the seafloor.

Students should view and discuss "The Core Lab" visualization as a team, but you may want to have students working on their own computers or in pairs so that they can see the visualization well. The student who is assigned the role of "Sedimentologist" should become an expert in this part of the lab; they will be responsible for synthesizing this information at the conclusion of Lab 6.

Do a simple demonstration with iron filings and a dipole magnet to help students visualize the Earth's magnetic field. To do this demonstration, place a dipole magnet underneath a sheet of white paper. Sprinkle iron filings on top of the paper and have students make observations about the orientation of the magnetic minerals. Remind students that sediments contain magnetic minerals that become aligned with the Earth's magnetic field when they settle to the ocean floor. Once the sediments become buried underneath successive layers, this magnetization becomes "locked in." Scientists measure the orientation of magnetic minerals in rocks and compare the pattern of reversals (which look like a barcode) to a global pattern derived from the magnetic record recorded in volcanic rocks on the seafloor and seafloor sediments.

Watch the video on magnetic field reversals as a class and facilitate a discussion with the students to clear up misconceptions about the Earth's changing magnetic field. It is important to note that scientists have constructed the Geomagnetic Polarity Timescale, in part, based on the magnetization of volcanic rocks on the ocean floor.

The paleomagnetic data in this activity has been modified from its original form (an excursion at ~240 m has been covered up for ease of interpretation). The answer key shows the unmodified data, which includes three holes drilled from this site. Show students the actual data after they have made their interpretations. Students will use the "Polarity" column to shade in regions of normal polarity (positive inclinations) and should leave periods of reversed polarity blank to reveal their own "barcode" interpretation of the data. Students will analyze the data to estimate an age of the sediments by matching their barcode pattern to the Geomagnetic Polarity Timescale to the right. Their interpretations may vary, and this is to be expected. You may choose to have groups share their interpretations with the class to initiate a class discussion. Remind students that they are matching their pattern to the GPTS pattern and that the thickness of their bars might be different from the GPTS due to different rates of sediment accumulation (higher deposition rates = thicker bars). In general, students should interpret the upper part of the core (from ~220 m — ~290 m) as reversed polarity, and the sediments from ~295 m — ~320 m record a period of reversed magnetic polarity. When matched to the GPTS students should observe that the data records the reversal that occurred at ~2.6 million years ago (Ma). When they compare this age to the Neogene-Quaternary timescale from Lab 5B they should see that this age corresponds to the start of the Pleistocene Epoch.

Students will need to view "The Core Lab" visualization with the "Show" button selected under the "Microfossil Rollovers" section. Students will gather information using the round magnifying glasses, which show pictures and pertinent information about microfossils in the core. The information gathered will help students determine the age of the sediments, and will provide students with information about the climate when the sediments were deposited. Remind students to record their microfossil data in order from youngest (top of core) to oldest (bottom of core) in their data table.

Visit the JOIDES Resolution Education & Outreach page on Microfossils to learn more and see videos from the scientists on board.

After students complete their projects, have the groups report their findings. Have them critique or grade each others' work.

Wrap Up: Ask students their thoughts on completing the voyage. Probing questions:

Suggestions for how to use Student Notebooks for Lab 6.

#3 Planning and Carrying Out Investigations

#7 Engaging in Argument from Evidence 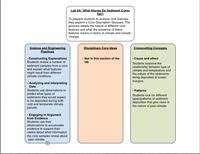 ×
NGSS standards for 6A 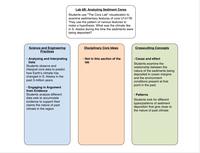 ×
NGSS standards for 6B 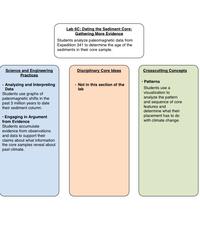 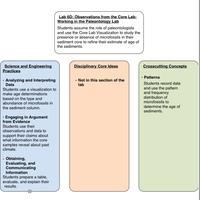 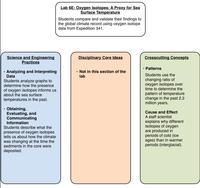 Provenance: Jeff Lockwood
Reuse: This item is offered under a Creative Commons Attribution-NonCommercial-ShareAlike license http://creativecommons.org/licenses/by-nc-sa/3.0/ You may reuse this item for non-commercial purposes as long as you provide attribution and offer any derivative works under a similar license.
Go to Next Generation Science Standards (NGSS)