The Effect of Computer-based vs. Paper-based Testing on Student Test Scores 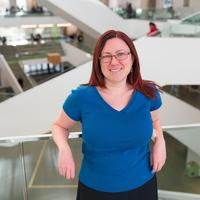 The goal of this project was to determine the effect of computer-based vs. paper-based testing on students' test scores in an introductory geology course. This study was conducted in two lecture sections taught by the PI at a Canadian undergraduate teaching university.
For each test, there were students from each section who wrote on computer and who wrote on paper and there are test scores both on computer and on paper for each student. In this course, students (N=103) wrote five unit tests. Each student wrote two tests on paper and two tests on the computer using the test application of the learning management system, Blackboard. For the fifth test, each student chose the format they preferred to use; there was equal preference for writing on computer and on paper. For each of the first four tests, half of each section wrote on computer and the other half wrote on paper.
This incomplete block design was analysed with an ANOVA, testing which factors might affect student tests scores. Results indicated that the most important factor affecting student test scores was the individual student and that there were no significant differences in the mean test scores for the different tests or the different formats. This indicates that this study did not provide evidence that the test format had an impact on mean student test scores.