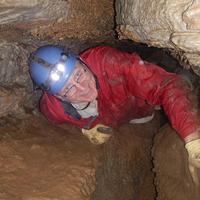 ×
Mammoth Cave National Park is home to the world's longest known cave system, with more than 400 miles (643 km) of vast chambers and complex labyrinths. A field trip to the Mammoth Cave provides much more than a show-and-tell opportunity. It provides a unique opportunity to help students understand how to visualize geologic relationships at regional and personal scales, how to see what a geologist sees, how to convey information about geology, and how to relate geologic features to landscape features. 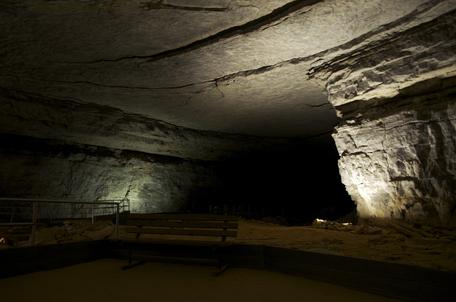 ×
Mammoth Cave's total surveyed extent currently stands at over 412 miles (more than 663 kilometers) with potential for a 1,000 mile (1,600 kilometer) system. In addition, there are more than 200 caves within the park which are disconnected fragments of the larger system or associated with local drainage features. The geology and geography of the area has resulted in a variety of karst basins, which have become the most thoroughly understood conduit flow aquifer in the world.

Karst Landscapes: These regions are characterized by rapid subsurface drainage through limestone and cave systems, accounting for approximately 20% of the Earth's land surface, 25% of the continental United States and 45% of the area east of the Mississippi River. Approximately 40% of the U.S. population relies upon karst aquifers for drinking water.

The Mississippian limestones of the Mammoth Cave region (300-325 million years old) formed at the bottom of a shallow saltwater sea now known as the Mississippian Sea. The marine life of that ancient sea is reflected in a range of fossils interspersed through the various limestone strata and exposed on the cave walls as caves were hollowed out. Typical fossils found in the cave include crinoids, blastoids, gastropods, and the teeth of fossil sharks.

The focus of this field trip will be the karst of south-central Kentucky (particularly the Mammoth Cave region). The first stop at the park will be at an overlook on the Park Mammoth Resort. At this overlook we will discuss the general geology of the area: what is karst, how karst forms, key features of karst, environmental hazards associated with karst, and how we study water flow in karst. The second stop will be at the Echo River Spring which will explore the other end of the karst system. At this stop we will discuss water quality, geologic history of the Green River, geophysical studies trying to locate submerged cave passages, and significance of the Green River. LUNCH BREAK. The third stop will be in Great Onyx Cave, which is an unlit show cave on Mammoth Cave National Park. The cave has a prepared trail but no fixed lighting; headlamps will be distributed for this tour. In the cave we will spend time discussing cave formation, dating the sediments in the cave, and how the geology, secondary minerals, and the ecology in the cave relate to the surface geology. We will also see and discuss a variety of cave features. After the trip in Great Onyx Cave, the trip will proceed back to Nashville. 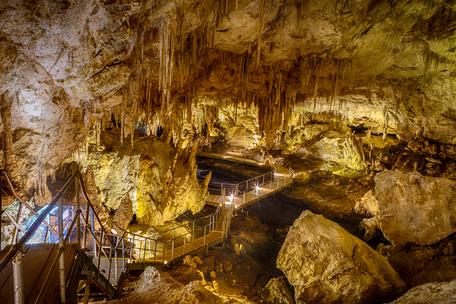 Registration for the field trip is open to the first 40 people to sign up. Participants can sign up when completing their Rendezvous registration form. Cost is $55 and includes transportation and a box lunch; complete your box lunch order using this form.