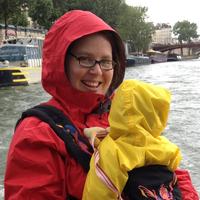 Alison Olcott Marshall, University of Kansas Main Campus
At the University of Kansas, all undergraduate students are required to take a natural science course regardless of their major. Given that this class is often the only college-level science class a student will ever take, and that two of the most pressing issues facing humanity right now—climate change and the prospect of human-caused mass extinctions—can best be understood through a geological lens, I decided to redevelop "Geol 121: Life Through Time from DNA to Dinosaurs," an introductory paleontology class for non-majors. Previously, this course was a lecture-based march through geological time, now, in the transformed Geol 121, geological and paleontological information are interwoven with the interconnected issues of human-driven extinctions and climate change. Students work in teams each class period to actively explore and discover knowledge themselves, rather than passively receiving it. Instead of a final exam, during the last third of the semester there are a series of assignments designed to scaffold students through a collaborative final class project, dubbed "PaleoCon." This project requires teams of students to generate and defend their own research into the twin civic issues underlying the course, and then, during Finals Week, present their findings to their classmates, the university, and the general public in a creative science-fair style presentation. This project requires students to research a modern animal threatened with extinction, an extinct related animal, and to apply their findings on the ancient organism to create a mitigation plan to help the modern animal. This project has led to demonstrable increases in student learning and engagement, while the students themselves report that, by having to think of solutions as well as researching problems, the project makes them feel helpful and like part of the solution, rather than helpless and overwhelmed.
« View More Oral Sessions