All types of color imaging, including film, print media, and modern digital cameras, reproduce color by gathering brightness data from a scene through different colored filters. The scene is then reproduced on paper, film, or screen by using this information to control the amounts of different colors of dyes, ink, or light.

ImageJ has the ability to separate a color image into its component bands, or channels.

This image was taken by International Space Station astronauts on April 16, 2001. It shows deforestation patterns associated with the Tierras Bajas ("lowlands") project in eastern Bolivia. The spatial resolution is about 12 meters per pixel.

This area was originally dry tropical forest. As part of the Tierras Bajas project, people were resettled here from the Altiplano region to grow soybeans. The agricultural "pinwheels" are centered on small communities spaced 5 km apart. Roads connect the town centers.


Launch ImageJ and open the image

Color imaging systems can use any number of bits per pixel in each channel. Higher-end systems use 16 or more bits per pixel. ImageJ can work with 16-bit grayscale images, and can combine them into 48-bit color images. (You can do the math yourself, or peek at the answer below—over 281 trillion possible colors!)

Note the size of the separate red, green, and blue channel images. Each is 1.5MB. Three of these add up to 4.5MB, but earlier you saw that the 24-bit RGB color image is about 6 MB. When ImageJ is working with 24-bit RGB images, it sets aside another "empty" channel in memory. In a program like Photoshop, this same image would occupy only 4.5 MB.

ImageJ can also construct or reconstruct an RGB color image from the individual red, green, and blue channel images.

This is cool and all, but why in the world would you want to deconstruct a color image? Here are a couple of ideas...

What happens when you assign the images to the wrong channels?

Show me an example 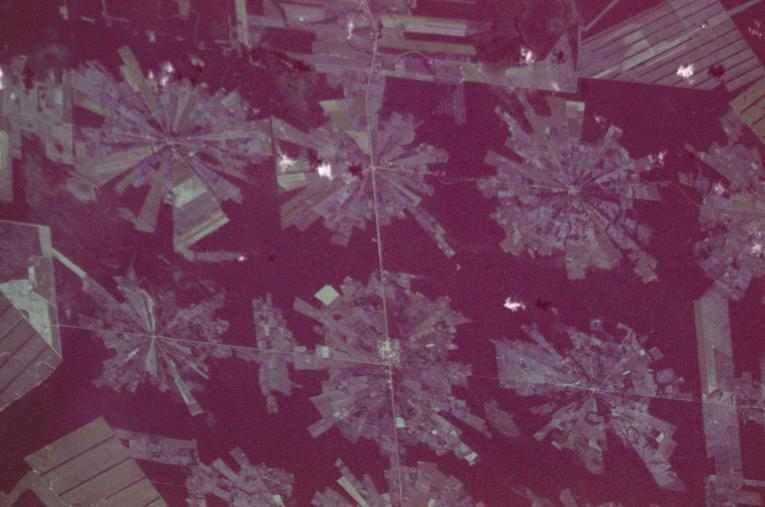 False color images are used to make specific features stand out so they are easier to see or interpret.

Pump up the contrast

Due to atmospheric haze, most images shot from the International Space Station have poor contrast and flat colors. What can we do in ImageJ to punch up the contrast? The idea is to split the channels, manipulate them separately, and then merge the channels back together.

Your Assignment: Create Your Own False Color Reconstructed Image