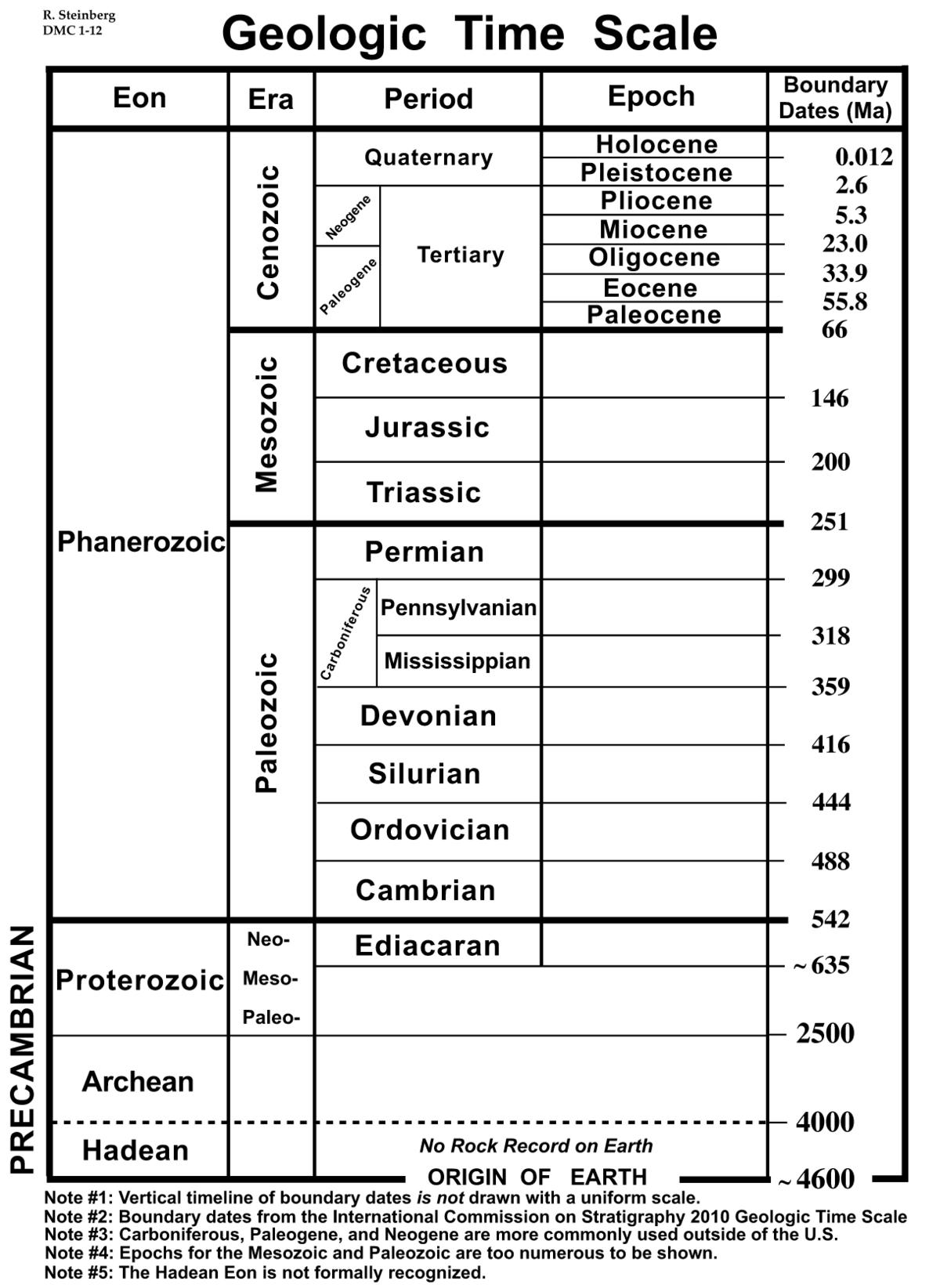 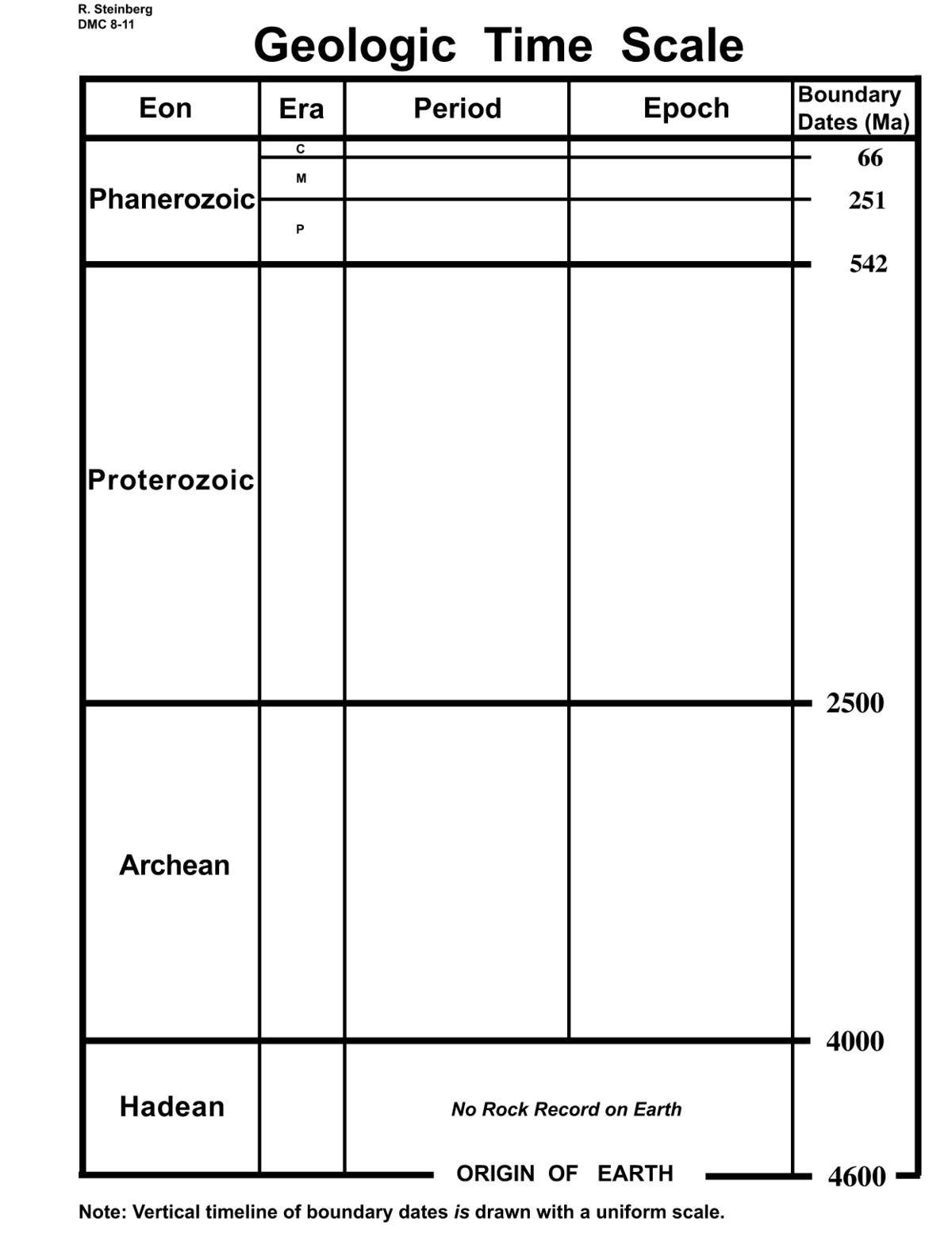 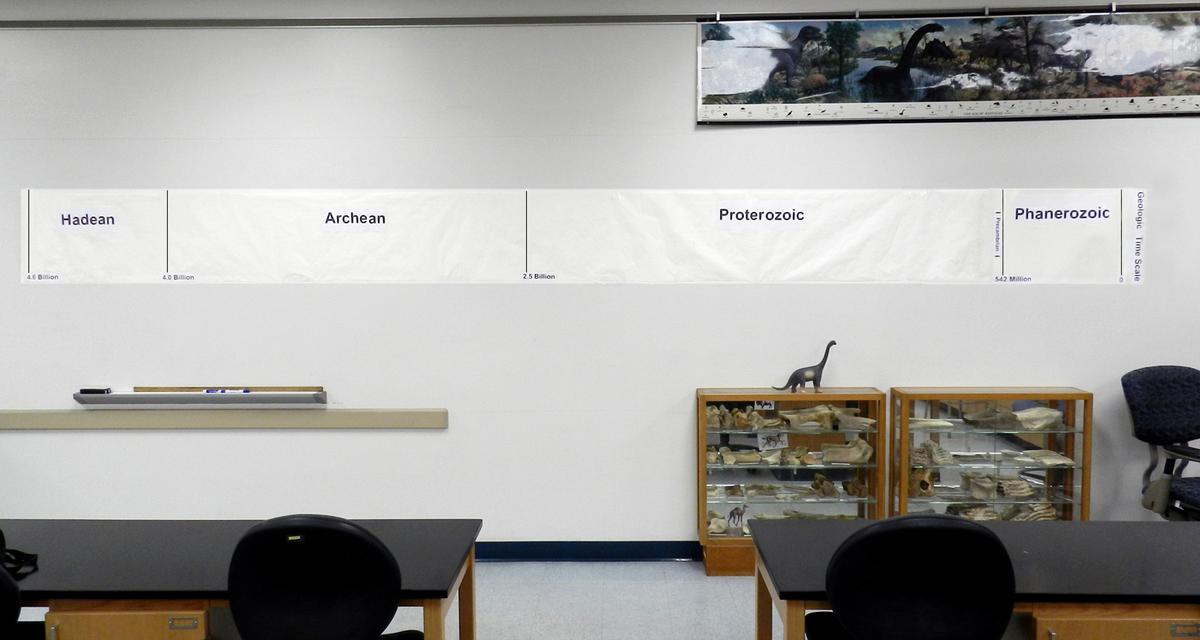 How this visualization is used in class:

Phanerozoic vs. Precambrian
It is easy to understand why the Precambrian is poorly treated, especially compared to the later Phanerozoic Eon. The Phanerozoic, comprised of the Paleozoic, Mesozoic, and Cenozoic Eras, is so interesting! But the Precambrian set the stage for all of the events of later times, and tremendous changes occurred during the Precambrian in the Earth's lithosphere, biosphere, atmosphere, and oceans. When teaching the geologic history of the Precambrian, I like to visually portray the immensity of this span of time by showing students both a page-sized and an extended poster-sized geologic time scale that I have created, with the time lines drawn to scale.

Available Geologic Time Scales
Most available geologic time scales are misleading because of their variable time line scale. For example, the most recent detailed time scale published by the Geological Society of America (GSA) in 2009 (http://www.geosociety.org/science/timescale/) divides Earth's history into four columns of equal length, one each for the Precambrian and the three Eras of the Phanerozoic Eon—the Paleozoic, Mesozoic, and Cenozoic. This is misleading, of course, not only for the Precambrian, but for the comparative lengths of the three Phanerozoic Eras as well.

In my classes I display a commercially produced poster-sized geologic time scale sold by Ward's. It is very detailed, 30 inches in length, and primarily displays the Phanerozoic, including the various Eras, Periods, Epochs, and Ages into which it is divided. The poor Precambrian is shown by only an inch thick bar at the bottom, accompanied by arrows pointing down. But how far down does it go? My geologic time scales, with time lines drawn to scale, provide an immediate, visual representation.

My Page-sized Geologic Time Scales
Figure 1 is a typical page-sized geologic time scale, with a time line that is not drawn to scale. I drew the time scale myself, based on the most recent time scales published by the GSA (2009) and the ICS, the International Commission on Stratigraphy (2010). I hand out copies of this time scale to my students early in the semester when we are discussing relative and actual age-dating and the historical construction of the geologic time scale. I also keep a pdf of it available for downloading on my password-protected course website. So students should never be without a copy. (I drew my own geologic time scale because I didn't like any that I found online. Feel free to use it, if you wish.)

I have also created a page-sized geologic time scale (Figure 2) with a time line that is drawn to scale. The Precambrian and its three Eons, the Hadean, Archean, and Proterozoic, and the three Eras of the Phanerozoic, are all shown at their true, relative lengths. (Feel free to use it also.)

Students see the Phanerozoic portion of the extended time scale first. Then, I slowly unfurl my time scale addition to reveal the full Proterozoic, drawn at the same scale as the Phanerozoic. The Archean is unfurled next, followed by the Hadean. Figure 3 shows my entire extended geologic time scale, taped to my classroom wall so I could photograph it for this Time Workshop visualization. (Because the Ward's time scale is protected by copyright, I created a generic geologic time scale of the same size for this visualization.)

Students seem to enjoy this visual demonstration, and I believe it leads to a greater comprehension of the immensity of time represented by the Precambrian.

A future project: The Ward's poster contains drawings of many of the fossil organisms that are typical for the various Periods of the Phanerozoic. I intend to attach images of typical Precambrian fossil organisms to my extended time scale. This would include the following fossils (and maybe others, as well):

Advice on using this visualization in the classroom:

I always try to make visualization presentations fun as well as educational. 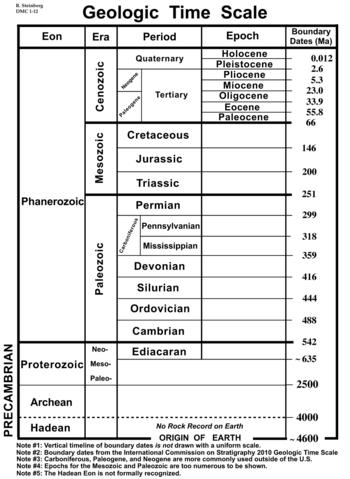 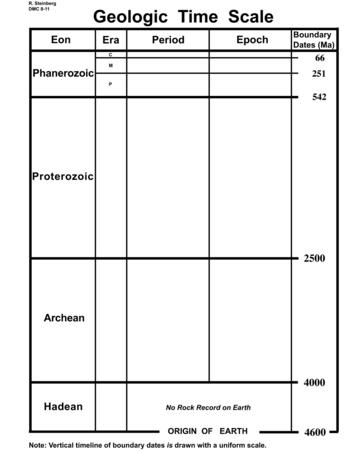 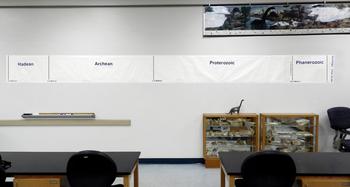