Using Jigsaw in the Geosciences

The examples below describe only a few of the many ways of using jigsaws in the geoscience classroom, lab, and field. Examples are listed in order of complexity and the likely amount of time necessary to complete the jigsaw.

You'll also want to explore our collection of jigsaw activities.

Jigsaws in the field

On a field trip, as in the classroom, students learn more by making their own observations and doing their own analyses than by being lecture to by the instructor. At a large road cut, though, students are commonly overwhelmed, don't know what to look at, and spend a lot of time wandering up and down the road cut not making a lot of progress. Jigsaw is a terrific strategy to use to focus student work. 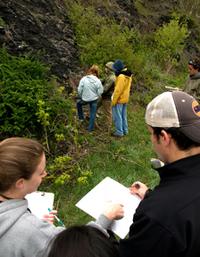 Jigsaws for reading in the literature