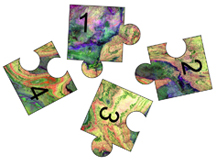 Jump down to a variety of types of jigsaws
Using graphs and equations : Using objects for analysis : Using data sets : Jigsaws and reading in the literature

The long and the short of it

The following two jigsaw examples lie at opposite ends of the spectrum in terms of length and complexity and also illustrate just how versatile the jigsaw technique is. Following these two examples, you will find examples of many different types of jigsaws that can be adopted, adapted or simply serve as catalysts for your own thinking.

One of the best known and most widely used jigsaw activities for geoscience courses is the Discovering Plate Boundaries exercise developed by Dale Sawyer at Rice University. The exercise is built around four global data maps: 1) earthquake location and depth, 2) location of recent volcanic activity, 3) seafloor age, and 4) topography and bathymetry. This jigsaw is an effective way for students to explore plate boundaries based on observations that they can make. The exercise takes three one-hour classes or one three-hour lab to complete. You can find the full exercise, data sets, and a Journal of Geoscience Education article about the activity at the link above.

At the opposite end of the complexity spectrum, is a very simple, but effective jigsaw on igneous rock classification that Jeff Niemitz (Dickinson College) developed for a large (120 students) introductory geology course.
Students make all of the observations that one might expect them to make about color, grain size, and texture, providing an engaging base for the instructor to introduce igneous rock classification. Although the jigsaw assignment takes time in class, the instructor does not need to spend as much time lecturing about igneous rock classification. If planned well, the overall time committed to using this jigsaw during class is comparable to that of lecturing about the topic. And the students will retain a mental image of these three rock types.

A variety of types of jigsaws


Short jigsaws during class that help students learn to plot data, interpret graphs, and use formulas and equations are easy to construct and valuable for students. The team assignment gives students an opportunity to grapple with a graph or equation and master it well enough to explain it. One effective way to have teams prepare is to have team members create their own concept sketches of the graph or equation. A concept sketch has a central graphic (e.g., a graph or an equation) that is concisely annotated with short statements (not just labels) that describe a student's understanding of the elements shown in the central graphic. A subsequent group task comparing team assignments provides students an opportunity to explore, for example, how a graph varies with different data inputs, how the terms in an equation influence the output, how different portrayals of the same data might result in different interpretations, and so on.


Jigsaw is a terrific way to have students examine and analyze unique but related objects. Each student benefits not only from individual in-depth analysis but also from the picture that the groups put together by exploring a range of examples. Jigsaw is particularly useful if you have a great collection of objects, pictures, images, or samples, but you don't have enough copies for each student to work with identical ones. Just remember that this works best if you don't need students to know each example equally well.

Show examples to catalyze your thinking


On many occasions, we'd like students not only to analyze a given data set but also to work with several other examples to see how they relate to one another, vary from one another, or can be combined to make a complete picture. Commonly, however, there's not enough time for students to do a complete analysis of several data sets, or it would be either repetitive or too time-consuming to have them do more than one. The jigsaw technique is a great technique to allow students to spend time analyzing one data set in depth, learn about others in less depth from a peer, and put together a complete picture that is not clear from only one data set. The team data analysis portion of the jigsaw could be done outside of class, in a lab session, or during class.


Jigsaws for reading in the literature

One of the problems with assigning outside reading in preparation for a class discussion is that, if everyone does the reading and comes adequately prepared, it's hard to "discuss the reading" during class in an interesting way. The literature is also typically difficult for undergraduates to read, and assigning multiple articles to achieve either breadth or depth might not be desirable.