Hide
This page first made public: Dec 1, 2008
This material is replicated on a number of sites as part of the SERC Pedagogic Service Project

Society's efforts to find and develop renewable energy sources are driven by the need to mitigate detrimental environmental effects brought about by some current sources, and supply problems associated with using non-renewable sources. For these reasons, energy issues are currently prominent in the media. Future scientists and other citizens need to become literate concerning the technical aspects of using renewable energy sources, and how these sources relate to Earth system processes.

In this activity, undergraduate students use Google Earth to investigate a variety of renewable energy sources and select sites within the United States that would be appropriate for projects based on those sources. These sources include solar energy, bioenergy, hydroelectricity, tidal power, wind energy, wave energy, geothermal, osmotic, and ocean and lake thermal energy.

This activity is suitable for:

The activity needs to be conducted in a computer laboratory, where all students can work at computer stations individually or in pairs. The laboratory also needs to be equipped with an instructor station connected to a projector so that the students can observe what the instructor is doing during the activity. All stations must have internet access, and have Google Earth and a web browser installed. The instructor should have enough prior knowledge of Google Earth to be able to troubleshoot common problems related to errors that students may make. The students should know how to use the Fly To tab in the Search pane, how to zoom in and out, and how to pan the view. They also need to know how to create folders, overlays, and placemarks in Google Earth. They should be familiar with the navigation controls and components of the toolbar. The students must have access to accounts that enable them to visit off-campus web sites. The operating system should be configured to recognize kmz files, so that the browser offers to open them in Google Earth.

Prior to participating in this activity, the students need to have an understanding of the following energy-related concepts:

This exercise was originally used in an undergraduate course at Stony Brook University - GEO 311: Geoscience and Global Concerns. Enrollment in the course was a mixture of geoscience and non-geoscience majors.

Students need the following handout to guide the activity:

Access to an electronic copy of the pdf file will enable them to conveniently navigate hyperlinks needed for this activity.

In addition, they need to be given a link to the following data file (zip format), which contains two Google Earth KMZ files:
Data File (Zip Archive 759kB Oct21 08)

The Google Earth Student User Guide will also be helpful to them.

This activity is designed for one class session of about 80 minutes or two class sessions of at least 40 minutes each. Actual time needed for this exercise may vary depending upon the amount of previous experience students have had using Google Earth and the amount of time devoted to informal discussion during the exercise. The exercise may require two periods of 80 minutes each if the students are not yet familiar with creating overlays and placemarks in Google Earth.

Prior to the exercise, the instructor should look through the References and Resources section below, and be prepared to offer the students guidance regarding which resources might be deemed best for the context of the course. The students do not need to restrict their proposed sites to power plants. For instance, they can also propose district energy infrastructure and EERE Clean Cities transportation projects if they have learned these concepts. In addition to marking sites with point placemarks, they can also create Google Earth paths to mark routes for biofueled buses or Google Earth polygons to outline proposed district energy service areas.

The Google Earth data file provided with this exercise contains examples of overlays. If the students are not familiar with how to create their own overlays and placemarks, this needs to be demonstrated for them. A good example for them to begin with is to overlay the California map from the Energy Information Administration's Energy Potential Maps web page that is referenced in their handout. They should then open the Environmental Protection Agency's Maps and Incentive Sheets page to open the Renewable Energy Interactive Map data on Google Earth. This file contains placemarks of polluted sites that indicate their suitability as sources of various forms of renewable energy. With that data and the California Overlay, the students can identify and placemark an appropriate site for a solar energy project for practice. 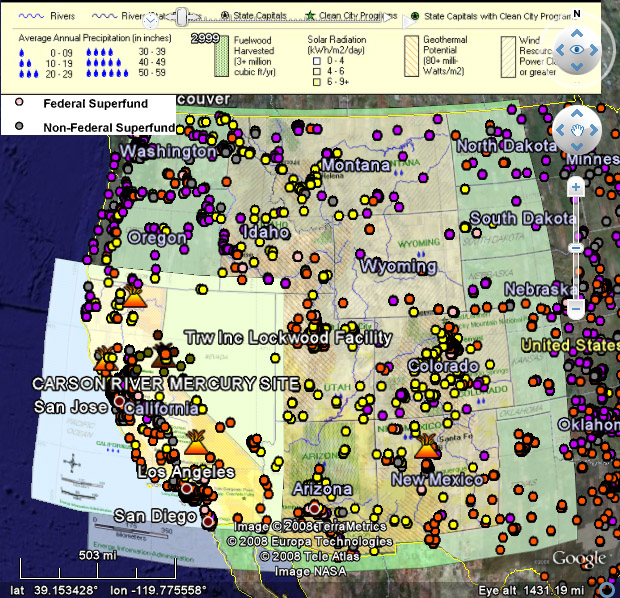 Google Earth with overlays of maps from the Energy Information Administration and data on polluted sites with potential for renewable energy development from the Environmental Protection Agency.

Undergraduate students typically find Google Earth intuitive and easy to use concerning navigation and viewing of mapped data. During the activity, it is important to have available people who can assist students who have problems while using the computer stations. Assistants need to have good prior knowledge about the subject matter and about the techniques of using Google Earth. If this exercise constitutes the students' first exposure to Google Earth, they may initially need some help learning how expand and collapse the listings of data in the Places pane. Some people find saving Google Earth data confusing. Students should be made aware of the online resources that provide information on using Google Earth.

It is best to associate the exercise with some discussion in order to stimulate ideas among the students about complex interrelationships between components of the Earth system. The students learn most effectively if the instructor conducts periodic class discussions about the questions during the activity, even though it may make the assessment process less rigorous if the handouts are to be returned to the instructor for grading. Alternatively, a discussion could be conducted after the handouts are graded and returned to the students, but that unless that is done in a computer laboratory, this would prevent the discussion from being integrated with use of the computer stations.

In GEO 311: Geoscience and Global Concerns at Stony Brook University, we engaged the students periodically in informal discussion during the exercise, and had them hand it in at the end of the session for grading. They need to be provided with a means of handing in a Google Earth kmz file electronically in response to question 1. For question 2, they can either be asked to write the answer on the handout for submission, or they can be required to hand it in electronically.

Continuing the Study in Greater Depth

As a variation or follow-up to this exercise, students can be asked to propose and map renewable energy facilities for a specified city or region, such as their own. They should begin with an assessment of what potential energy sources and siting options are provided by the natural and built environment in the selected locality, a survey of existing energy facilities, and a determination of the energy needs of the population to be served. The students can base their needs assessment on an average rate of electricity use of about 1500 watts per capita for the United States as a whole, or upon another figure that applies specifically to the region of interest. In addition to marking points with placemarks, students can be asked to demarcate areas or represent other details of their proposed sites with Google Earth paths or polygons. Students with knowledge of ArcGIS and access to appropriate regional data can use that package for performing their analysis and mapping as an alternative to using Google Earth.

Assessment of the students' understanding of topic can be accomplished through:

Since some components of this exercise call for qualitative judgments on the part of students, which may reasonably be expected to vary, grading should be somewhat for these portions, in order to enable the students to feel comfortable being creative.

Biomass
From Waste to Heat in Didcot
The idea of biofuels is good, but....
GreenHunter Energy Biofuel Plant

Metals and Other Critical Materials
Mountain Pass Rare Earth Mine