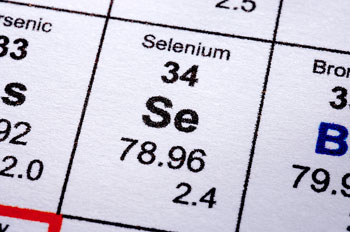 As is true with all substances, the dosage determines the difference between nutrient and poison.

In order to understand the impacts of phosphorous mining, a basic understanding of what phosphorous is and why it is mined is first needed.

Phosphorous is mined from the ground primarily because of its use as a fertilizer. Along with nitrogen and potassium, phosphorous is one of the most crucial elements for plant growth in soils. Phosphorous is important to plants in processes such as: energy generation, nucleic acid synthesis, photosynthesis, glycolisis, respiration, membrane synthesis, enzyme activation, metabolism, and nitrogen fixation.

Because of its importance as a fertilizer, phosphorous has become invaluable in today's society. Current populations would be impossible to maintain without this amazing fertilizer, and its mining will continue.

Direct impacts from the fertilizers produced through the process of mining phosphorous can also be important. When fertilizers runoff fields, into streams, and eventually make their way to oceans algal blooms can develop.

Selenium is a nonmetal. It is naturally found in metal sulfide ores. Because of its chemical properties, selenium is often a replacement of sulfur in amino acids.

Here is the EPA's page on selenium in drinking water Selenium and Drinking Water.

Transport of Your Selenium

Selenium is transported most commonly by water. When selenium rich deposits are disturbed (commonly through phosphorous mining) the selenium becomes available to be transported (it has now entered the ecosystem by entering the water). Once selenium has become freed of its parent material it can be taken up by plants and animals that are in direct contact with the water that has become selenium enriched. Fish, amphibians, water fowl, and semi aquatic mammals are most likely to have high concentrations of selenium via contact with the water. Transport to humans is most common through fishing of and eating of fish that live in selenium enriched waters.

Much like lead, mercury, and other metals, selenium can be concentrated up the food chain. For this reason, in contaminated areas, it is sometimes suggested that fish should not be eaten.

The fertilizers that are made from the process of phosphorus mining can also be transported by surface runoff.

Here is a link for a good slide show on selenium and its affects on biology Selenium and Biology. Here is the USGS' page on how selenium is linked to food webs Selenium and Ecosystems 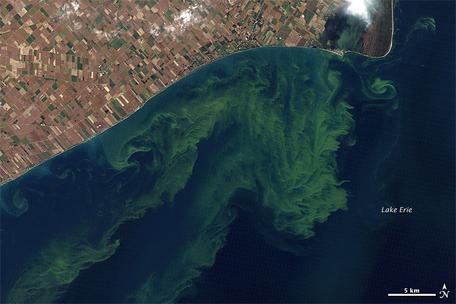 Hide
Algal Bloom in Lake Erie (NASA Earth Observatory)
Selenium can be toxic at very low dosages, and its effects include: a garlic odor, gastrointestinal problems, hair loss, sloughing of nails, fatigue, irritability, and neurological disorders. Selenium has also been shown to be a mutagen in fish and can drastically affect fish reproductive systems.

Even so, there is evidence to suggest that selenium may reduce the risk of prostate cancer. It is also important in thyroid function and is a micronutrient for plants and animals.

As with all toxins, dose is very important when dealing with selenium. The EPA has suggested a maximum concentration of 50 ppb (parts per billion) as selenium's upper limit of safety.

The effects of the runoff of the actual phosphorous fertilizers can cause a large negative impact as well. In a less direct disadvantage then selenium, but still very harmful. These fertilizers, when concentrated in runoff, can cause algal blooms in the ocean. These blooms happen because the fertilizer is also a vital (and usually limited) nutrient for algae as well as crops. While helping algae may not seem like a problem, the increased activity of the algae effectively uses up all of the oxygen that is available in the water. This cause massive dead zones in the ocean essentially devoid of macroscopic life. This is a less direct effect on human health, but it is still a major issue that needs to be addressed. The algae itself can often release powerful toxins of their own, which can be highly toxic and very abundant depending on the algae.

if the soils that contain selenium were to stop being disturbed, new selenium would stop entering the ecosystem at such high rates. This environmental concern will have to battle the economic and practical matters of phosphorous and its necessity in the modern world.

A map of phosphorus sources in eastern Idaho. Map of Phosphate Mining in Eastern Idaho

A very good site on phosphorus and how plants absorb this nutrient. Phosphorous and Plants

A good page on how selenium is integrated into biologic systems. Selenium and Biology

An interesting site on how selenium works its way through ecosystems. Selenium and Ecosystems