Radon is a naturally caused radioactive gas that can infiltrate your home. Knowing where radon comes from and how it gets into your home can help protect you from its negative health effects.

Radon is a naturally occurring chemical element and is number 86 on the periodic table. Radon found in your home and the environment comes in the form of a gas. It is odorless, colorless and tasteless. Radon's dangerous nature comes from its radioactivity. Radon emits alpha particles which can be damaging to human tissues. In nature radon is produced by the radioactive decay of the elements uranium and thorium. Radon radioactively decays itself and has a relatively short half life. Radon produces other radioactive elements as products of its decay. These decay products, or "radon daughters" as they are commonly referred to, are dangerous as well. 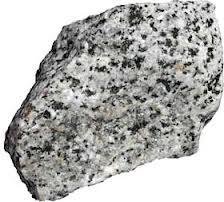 Hide
Granite is a natural and common source of radon. Picture courtesy of the National Park Service Website.

Radon is produced naturally by chemical processes originating from local geology. As stated earlier radon is naturally produced by the radioactive decay of the elements uranium and thorium found within the soils and rocks of the Earth. Natural geologic sources of uranium include uranium ores and rocks of various types such as shales, granites, metamorphic rocks such as gneiss and schist, and less commonly in sandstone. Granites and shales are noted as more common sources due to their higher comparative levels of uranium in their composition. However, not all rocks of these types are prone to high levels of radon emission. So don't swear off granite counter tops, just get them tested first.

Radon is found in almost all soils around the world. These concentrations, however, are generally of low amounts. In the United States there are areas of high levels of radon. These areas reflects the type of bedrock underlying the country. Areas of higher radon levels are indicative of certain rock types in the bedrock mentioned previously as common sources of radon. The Northern states show overall higher levels than other states from the Eastern seaboard throughout the Midwest.

Hide
Radon can rise from the soil into the bottom level of this home through cracks and seams of the foundation. Picture courtesy of the Environmental Protection Agency

Radon, as a gas, flows freely in the environment. As radon is produced by minerals and certain rocks it is introduced into the soils and air around those sources. Despite its high density for a gas radon permeates upward through the soil. This is the point where radon can start to come in contact with humans. As radon moves upward through the soil it can enter a pathway to humans one of two ways. Radon can either permeate into underground water wells. Radon can also, and more commonly, rise upward into the foundation of homes and buildings. Radon can easily travel through cracks and faults in foundations which allow it to enter buildings. Once in a building radon, being dense, generally stays in the lowest level.

Due to radon's gaseous state the gas mostly enters the body through inhalation. The radon gas can be directly inhaled and so can the "radon daughter" elements radon produces. These daughter elements are solids unlike radon itself. The solid elements often bind themselves to dust particles in the air allowing inhalation of these elements to take place. The airborne particles and the gas itself, when inhaled, are deposited within the lungs. Ingestion of radon through contaminated water also occurs, however it has not been found to affect human health. Contaminated water can, under certain temperatures and pressures, release radon as a gas. This occurs most often during showers.

Due to radon's radioactivity it is a mutagen. This means that when radon enters the body the body is now exposed to constant radiation. Radon enters the body through inhaltion and settles in the lungs. These radon molecules constantly emit alpha particles. These particles bombard the tissues of the lungs and can physically damage the DNA of the affected cells. This most notably manifest itself as lung cancer. According to the United Nation's World Health Organization radon is the second leading cause of lung cancer after smoking in many countries. 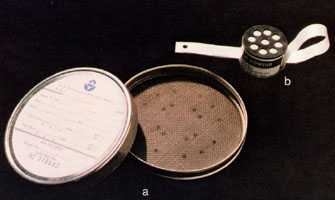 Hide
This is an at home test for radon. It uses activated charcoal to freely absorb radon particles that be later tested for. Photo courtesy of the Department of Conservation of California

Prevention methods for radon are relatively simple. While not completely stopping radon entry, sealing cracks in the foundation, sealing seams in basement walls and floor, and sealing utility junctions as much as possible can greatly reduce the amount of radon that can freely enter your house. Installing ventilation for your basement can also reduce the amount of radon that is able to accumulate in your home. There are multiple options for testing for radon in your home. Acitvated charcoal kits are a simple, at home, option to test for radon. The charcoal acts as an absorber of free particles. This charcoal can be later sent in and tested for radon. Other tests aim to detect the alpha particles emmitted by radon. Most remediation techniques are designed around ventilation. There are two common ventilation options to remediate high levels of radon. One is simple mechanical ventilation of the room/level of the builiding to remove excess build up and prevent it from happenning again. Another option is what is callled active soil depressurization. In this method a pipe is lead from beneath the foundation, up through the building and terminates in an exhaust fan at the top of the building. This process alleviates air pressure under the foundation to lmit the amount of radon freely flowing upward. The fan at the terminus of the system also facilitates mechanized ventilation.