Summary of Recent Research about the Early Earth

This page includes the following materials that have been drawn from research about the early earth:

Excerpts from the 2007 workshop on teaching about the early earth

At the workshop on Teaching about the Early Earth in April 2007, four invited researchers shared highlights and recent advances from their work. The talks illuminated new research in the areas of the solid earth, the atmosphere/climate system and the emergence and evolution of early life.

The first 50 Ma: Planetary formation and the role of water (PowerPoint PRIVATE FILE 4.7MB Apr25 07) by Lindy Elkins-Tanton, Massachusetts Institute of Technology
This presentation describes how modeling of the crystallization of an early molten Earth can be used to test magma ocean models and the implications for the differentiation of early Earth, mars, and Moon. Mantle overturn visualization - surface cooled from the top ( PRIVATE FILE 1.5MB May16 07)
Mantle overturn visualization - surface insulated at the top ( PRIVATE FILE 2.2MB May16 07)

Gaia Revisited: The Interplay Between Climate and Life on the Early Earth (PowerPoint PRIVATE FILE 1MB Apr20 07) by James Kasting, The Pennsylvania State University
Dr. Kasting described the use of Sulfur isotopes to constrain processes at work in creating the early atmosphere, the nature of that atmosphere, and the resulting implications for the temperature and climate on the early Earth. For example, how did the early Earth remain warm enough to sustain liquid water and early life?

Evolution on the pre-Phanerozoic Earth (PowerPoint PRIVATE FILE 2.1MB Jun7 07)
by Keynote speaker Lynn Margulis, University of Massachusetts, Amherst
In this talk, Dr. Margulis showed how modern life forms can be used to infer evolutionary processes active in the past, particularly the importance of symbiosis-the inheritance of acquired genomes, and the implications of the mutual evolution of life and Earth.

The Record of Life on the Early Earth (PowerPoint PRIVATE FILE 2.1MB Jun7 07),
by Stanley Awramik, University of California, Santa Barbara
This talk focused on the use of the early fossil record to constrain the evolution of the earliest life and also, the evaluation of uncertain evidence in scientific thinking.

Research volumes about the early earth

When did Plate Tectonics Begin on Planet Earth?

Inspired by a GSA Penrose Conference held in Lander, Wyoming, June 14–18, 2006, this 2008 GSA volume discusses the beginning and evolution of plate tectonics on Earth, and gives readers an introduction to some of the uncertainties and controversies related to the evolution of the planet.

Origin and Evolution of Earth: Research Questions for a Changing Planet

The National Research Council assembled a committee to propose and explore grand questions in geological and planetary science. This book captures, in a series of questions, the essential scientific challenges that constitute the frontier of Earth science at the start of the 21st century.

More information from the National Academies Press, including free pdf summaries and free online reading of this volume.

The earliest Earth was a strange inhospitable world, yet transitions to a more familiar planet occurred within the first billion years. In spite of sparse preservation of an ambiguous rock record, recent studies refine the nature and timing of key events. This issue reviews current knowledge of the age of the Earth, massive early meteorite impacts, the early atmosphere and hydrosphere, the rock record, and the first life. 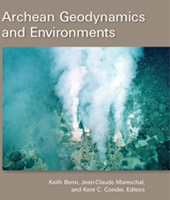 Edited by Wolf Uwe Reimold and Roger L. Gibson
This Special Paper presents a collection of 19 papers contributed to a joint Field Forum organized by the Geological Society of America and the Geological Society of South Africa in July 2004 in the Barberton Greenstone Belt and the Vredefort Dome, South Africa. The papers cover a wide variety of themes, including Archean and Proterozoic crust formation and geodynamics (with an appraisal of evidence of Archean subduction processes); the significance of impacts in the evolution of the early Earth's crust; traces of early life in Archean environments of Australia and South Africa and related studies of depositional environments; and processes affecting the giant Witwatersrand gold deposit.

More information from the GSA bookstore 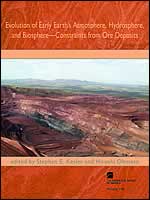 Edited by Stephen E. Kesler and Hiroshi Ohmoto
This GSA memoir contains 17 papers about the Earth's early atmosphere, hydrosphere, and biosphere, from Hadean through Proterozoic time. Topics include the early evolution of life, formation of the continents, oxygenation of the atmosphere, interpretation of the banded iron formations, and more.

More information from the GSA bookstore

Other Resources of Interest

A Cool Early Earth by John W. Valley, William H. Peck, Elizabeth M. King, and Simon A. Wilde
This landmark paper describes the analysis of the oldest-known earth materials, 4.4 billion year old zircon grains. Studies of these zircons suggest that some continental crust formed as early as 4.4 Ga, 160 m.y. after accretion of the Earth, and that surface temperatures were low enough for liquid water.

Heterogeneous Hadean Hafnium: Evidence of Continental Crust at 4.4 to 4.5 Ga by T. M. Harrison, J. Blichert-Toft, W. Müller, F. Albarede, P. Holden, and S. J. Mojzsis
This Science paper tests the hypothesis of progressive continental growth beginning at 4 billion years ago. The authors measured initial 176Hf/177Hf values of 4.01- to 4.37-Ga detrital zircons from Jack Hills, Western Australia. Their results support the view that continental crust had formed by 4.4 to 4.5 Ga and was rapidly recycled into the mantle.

Comment on "Heterogeneous Hadean Hafnium: Evidence of Continental Crust at 4.4 to 4.5 Ga" by John W. Valley, Aaron J. Cavosie, Bin Fu, William H. Peck, and Simon A. Wilde
The authors of this response question the interpretations of Harrison et al (above) and draw less extreme conclusions. In their response, the authors interpret results for >4 Ga zircons to suggest the presence of granitic (sensu lato) crust by 4.4 Ga and oceans by 4.2 Ga. The composition of this crust is uncertain, although the preservation of these zircons requires at least some early buoyant crust.

Response to Comment on "Heterogeneous Hadean Hafnium: Evidence of Continental Crust at 4.4 to 4.5 Ga" by T. M. Harrison, J. Blichert-Toft, W. Müller, F. Albarede, P. Holden, and S. J. Mojzsis
This response corrects some misrepresentations of their original work and continues to build the case for the presence of continental crust or plate boundary processes prior to 4 billion years ago.

Vestiges of a Beginning: Clues to the Emergent Biosphere Recorded in the Oldest Known Sedimentary Rocks by Stephen J. Mojzsis and T. Mark Harrison
This research paper describes findings from the oldest known rocks of marine sedimentary origin from the southwestern coast of Greenland. Evidence suggests that these rocks preserve a biogeochemical record of early life. On the basis of the age of these rocks, the emergence of the biosphere appears to overlap with a period of intense global bombardment. This finding could also be consistent with evidence from molecular biology that places the ancestry of primitive bacteria living in extreme thermal environments near the last common ancestor of all known life.

Emergence of an aerobic biosphere during the Archean-Proterozoic transition: Challenges of future research by Victor A. Melezhik, Anthony E. Fallick, Eero J. Hanski, Lee R. Kump, Aivo Lepland, Anthony R. Prave, and Harald Strauss
The earth system experienced a series of fundamental upheavals throughout the Archean-Paleoproterozoic transition (ca. 2500-2000 Ma). Most important were the establishment of an oxygen-rich atmosphere and the emergence of an aerobic biosphere. This paper describes evidence of the hallmark events of that transition.

Earth-Like Planet Discovered in Libra This story from National Public Radio describes a discovery of a new planet in the constellation Libra. The small, rocky planet is special because it appears to have mild temperatures, like Earth. Researchers believe it looks like the first planet outside of our solar system that could be home to liquid water, and maybe even life.

Hydrothermal Systems: Doorways to Early Biosphere Evolution by Jack Farmer
Hydrothermal systems provide important environments for the synthesis of simple precursor carbon compounds that may have been important in the origin of living systems. Such environments probably also played a primary role in the early evolution of the biosphere.

Do you have a reference pertaining to the early earth? Pleasetell usabout it.