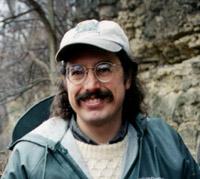 Hide
Basil Tikoff in the field. Photo courtesy of Basil Tikoff and the University of Wisconsin - Madison.
Most of the information on this page is from an interview that took place on November 3, 2005.

Basil Tikoff is a professor in the Department of Geology and Geophysics at the University of Wisconsin-Madison. The University of Wisconsin-Madison is the flagship campus of the UW system, with an enrollment of more than 40,000 students. Faculty members in geology and geophysics are expected to maintain very active research programs. Basil interprets the unwritten expectations of the department to be publishing three papers per year, maintaining at least one active NSF-sponsored research grant, and advising at least three graduate students each year. Currently, he is advisor or co-advisor to three Ph.D. students, four Masters students, and two senior undergraduates. Although he is not expected to advise undergraduate researchers, the department sees such work as a bonus.

Basil believes that success in graduate school, and indeed in science, is primarily a matter of personality. Given the assumption that any graduate student in structural geology has the ability to visualize three-dimensional geometry, he says, the students he wants to encourage are those with people skills—the ones who talk to each other about their work, who can listen to other people's ideas with an open mind, who think broadly when faced with unexpected new data. These are the students who, surrounded by fellow graduate students working on completely different projects, nonetheless talk to each other about their research, and listen to each other as well. Basil's advisees do this... not coincidentally, he says, but because those are the students he accepts to work with him. In fact, his two criteria for accepting graduate students are intellectual ability and whether they will fit into his lab.

Basil prefers to have each of his graduate students work individually, on unrelated projects. (The undergraduates each work with a graduate student, on separate but related projects.) The interests of his incoming students determine the focus of their research projects. Basil believes this works well for his students in several ways. For example, they are likely to be more motivated to work on projects that meet their interests. It also requires them to become increasingly independent over the course of their graduate school careers. Paradoxically, Basil says it also leads to open, collaborative discussions amongst his graduate students about their work, because every project is so completely different from the others. Motivation, independent thinking, and collaborative thinking, in Basil's opinion, are the characteristics his students will need to succeed after graduate school.

Basil acknowledges that one side effect of his policy is that periods of several weeks may go by without his students making progress on their research, but he accepts that as a natural cyclicity. "Some people just go through unproductive phases in their career," he notes. Sometimes, he says, you need to go down a blind alley, just to see what's there. It may or may not pay off, but you'll never know unless you try. So if his students don't have anything to show for the past six weeks of work, that's okay—as long as they can figure out what they're going to try next.

Basil sees himself as a field geologist, so it's not surprising that he thinks doing field work with his graduate students is an ideal way to get them doing research. Field work, he says, forces you to look at data, talk about geology and think creatively about interpretation—to do the kind of science he wants his students to be able to do. There's an intensity about not being able to go home, being surrounded by the question you're trying to figure out, that keeps people intellectually engaged. How students face puzzling data in the field, he says, tells you how they will manage doing research in general. Are they intellectually open to new ideas? Do they talk about what they're thinking, and listen to what others have to say? Do they see connections? If so, they are likely to be successful researchers.

One of the biggest challenges of advising graduate students, Basil finds, is judging what kind of help students need, when. This is challenging for two reasons: their needs change over time, and each student's needs are different. His open door policy is one way to address these different and ever-changing student needs. When students are initiating contact, they're letting you know what they need at that time.

A second challenge is devising appropriate Ph.D. research projects. Basil's approach to this is to ask his incoming students what they want to be able to do when they finish their degrees. Then he works with them to design a project that will teach them the skills they will need.

For faculty starting out at "R-1" universities, Basil has two pieces of advice. First, he says, stay out of the inevitable academic politics as much as you possibly can. Second, he suggests starting out by having Masters students work on extremely well-defined problems with very clear goals. Later, once a student has solved a well-defined problem, he or she can go on to explore some tangential question, too. But it's essential for your first students to be successful and to publish their results.

What's next? Since Basil's underlying interest is how rocks deform, and he wants to study rocks that are both mineralogically simple and tectonically important, the next two topics he will tackle are the lithospheric mantle and volcanoes. Expanding on his research is one of Basil's strengths; if you listen to people and can think broadly, he explains, most people will happily collaborate with you. In fact, he jokes, for him the problem is knowing when to say "no."