Here are a few examples of posters created by students in Greg Hancock's Surface Processes class, along with Greg's descriptions of the projects they summarize. Clicking on a picture of a poster will open up a new window with a larger image of the poster. 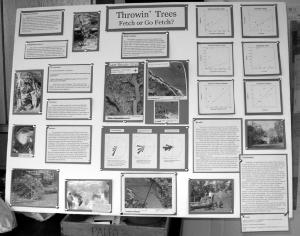 Example 1: Did wind fetch affect the abundance and size of tree throw events during Hurricane Isabel?

This project was inspired by our "big event" during the class in Fall 2003, Hurricane Isabel. The students became interested in how much sediment was transported by tree throw during the hurricane after we did a lab on this shortly after the event. They tested the hypothesis that fetch was important by going to 3 locations - one along a major river, one on a small lake, and one in intact forest - and examined the frequency and size of tree throw within similar areas. The measurements included diameter and volume of the root ball, compass direction of tree fall, breast height tree diameter, and length of wind fetch. The students involved also had training in GIS, and used ArcView and digital orthophotoquads to map the location of their field sites. The findings were not as expected, where fetch was directly related to the magnitude of tree throw, but concluded that elevation in tandem with fetch may be the important control. 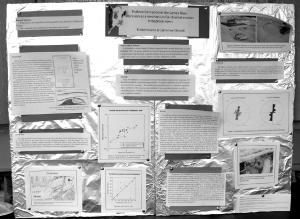 Example 2: Are potholes on the James River near Richmond localized on joints and fractures?

Students investigated whether pothole formation was related to the presence of rock irregularities like joints. Data collection included measuring pothole dimensions, orientation of pothole long axes, strike and dip of joints, and the presence or absence of joints at potholes. The data was then compared (qualitatively, but more rigorous statistics could have been applied) to determine if pothole formation, size, and orientation were related to joint patterns. 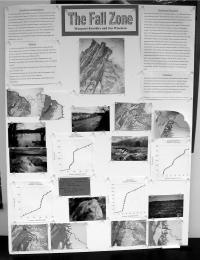 Example 3: Are the falls at the Fall Zone related to hard lithologies?

This is an example of one of my favorite kinds of projects - testing a concept that students have accepted as true but have not seen data that actually shows it. For this project, students used geologic maps of several locations along the Fall Zone, and constructed river longitudinal profiles from topographic maps. The geology was plotted on the longitudinal profiles to see if in fact there was a relationship between river gradient and underlying lithology. In the most recent iteration of this project, the students found that the relationship was not nearly as straightforward as they had been taught (surprise!). This led them to form additional hypotheses for the origins of the Fall Zone.