Work Done On, By, and To the Earth:

I have advocated using an Earth system approach to teaching undergraduate geoscience since we convened the Shaping the Future of Undergraduate Earth Science Education: Innovation and Change Using an Earth System Approach workshop (Ireton, Manduca and Mogk, 1997). I have been particularly interested in the topics of pathways and reservoirs of energy and mass in the Earth system, across spatial scales from microns to mountains, and including temporal concepts such as rates, fluxes and evolution (On the Cutting Edge workshop on Teaching about the Early Earth: Evolution of Tectonics, Life, and the Early Atmosphere). As energy and mass are transferred in the Earth system, I think of Earth processes in terms of the work that is done on the system, by the system, or to the system. With this perspective, it is important to identify the agents at work, how they interact, and what the consequences are. 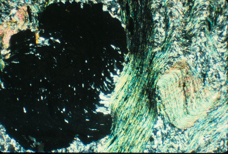 My early geoscience training was in the field of metamorphic petrology. The long-term heritage of this discipline is to use the approaches of classical thermodynamics and heterogeneous phase equilibria. Metamorphic petrology is also concerned with the deformational history of rocks (mostly in the ductile regime) and the role of deformation in orogenesis (mountain building). Thus, there are two components of work that are readily identified: Gibbs' Free Energy is the chemical work done by the system, and deformation represents the mechanical work—these may operate independently, but more often, chemical and mechanical work are contemporaneous and result in positive feedback mechanisms. This is how I teach my metamorphic petrology course: first, a review of the principles of chemical equilibria (mass balance, types of reactions, influence of solid solution, influence of mixed volatile or melt reactions), followed by a an overview of deformation mechanisms and products (folds, faults, ductile shear zones, and their relationship to crystal growth as revealed through textural analysis of rocks in thin section). These two work functions are then integrated by an in-depth study of the evolution of selected orogens of the world: the Archean Limpopo Belt, Proterozoic Grenville Orogeney, and Cretaceous-Eocene North Cascades system. 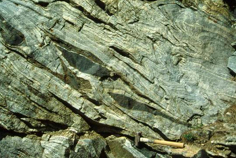 An example of the positive feedback between chemical and mechanical work can be found in the relationship between migmatization (partial melting processes) and ductile deformation (Mogk, 1992). Once a body of rock has exceeded the minimum conditions required to induce melting (initially in the presence of a water-rich fluid), these small amounts of melt greatly influence the structural integrity of the rock body, and this initiates localization of deformation in the form of ductile shear zones. In turn, the ductile shear zones serve as a conduit to locally concentrate the flow of water which leads to melting, and the migration of these melts into zones of relatively low pressure. This decompression causes the melt to crystallize, thus locally liberating water that then results in another cycle of melting, deformation, decompression and crystallization. These cycles of melting and deformation continue until the entire system either cools or decompresses below the minimum melt conditions. There are two important implications of these observations: 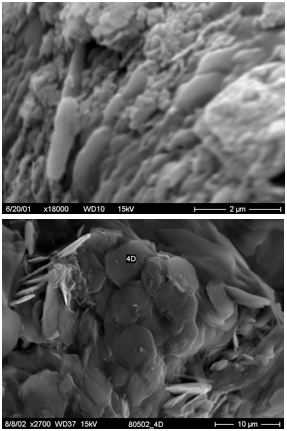 Top: sulfolobus attached to mineral substrate; Bottom: gypsum crystals precipitated in acid-sulfate hot springs
The concept of work done by the system extends to the biological world, as seen in our work on microbe-mineral interfaces in hot spring deposits in Yellowstone National Park (Mogk, 2003, Teaching Biocomplexity in the Geosciences Workshop). The extremophile bacterium, sulfolobus, oxidizes sulfur to produce sulfate as a metabolic by-product. Chemical equilibria precipitate gypsum, thus buffering the sulfate content of the hot spring waters at concentrations low enough to sustain sulfolobus as a viable life form (even at 80oC and pH= 2-3!). In a sense, microbes are metamorphic agents that are capable of contributing to the chemical work of the system. Mechanical mixing of natural waters in hot springs (meteoric v. magmatic) provides yet another possible work function in these systems.

Work done by humanity on Earth (climate change, modifying landscapes, any large engineering system) is yet another topic I explore in my Environmental Geology course. In all these cases, the challenge (for me) is to present the Earth system in such a way that we can readily identify the work that is being done by chemical, mechanical, biological, or anthropologic agents, and then show how these agents work together in processes that shape the Earth system around us.

Workshop on Teaching Biocomplexity in the Earth Sciences (2003)

Workshop on Teaching about the Early Earth: Evolution of Tectonics, Life, and the Early Atmosphere (2007)