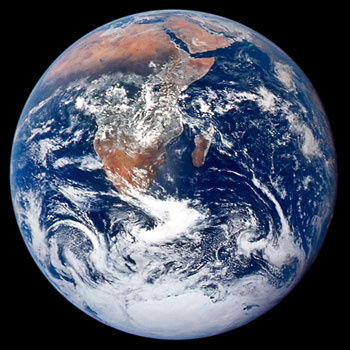 Astronaut photograph AS17-148-22727, taken by the crew of Apollo 17, courtesy NASA Johnson Space Center Gateway to Astronaut Photography of Earth .

Complex systems thrill me; ultimately I think that is what brought me into geology from chemistry. Many years ago at SMU, I began teaching Physical Geology course as an Earth Systems course. After the first experimental time, I could not go back. Earth Systems science was not the new idea many of us thought it was in the 1990's; A 1975 textbook written by Lee McAlester, SMU Dept. Chair at the time, took an Earth Systems approach. According to Lee the book's approach was inspired by 'The Blue Marble' the first Earth from space, taken by Apollo 17 astronauts on December 7, 1972. The image, which we all know, clearly shows Earth as a gorgeous, wonderfully complex system.

The joy of complex systems is key to several courses that I am lucky enough to 'teach'. Structural geology embodies rheology. Rheology is the key to basically everything, and almost everything affects rheology in one way or another— and those effects come at potentially at a wide range of spatial and temporal scales, to say nothing of the evolution of a material rheology as dependent on its unique history.

I start each year in structural geology with an exercise I call 'play with your food'. Students divide into groups of 4-5; each groups is given the same assortment of food goodies—pretty much what catches my eye [or is on sale] in the grocery store that morning: spaghetti noodles or other pasta, canned frosting, peanut butter, jelly, marshmallows, stick pretzels, saltine crackers, fruit roll ups... you get the idea. The assignment: Build a structure using some of all of the different materials, with the goal of building the highest and strongest structure. During the building consider what is meant by strength, and what makes something strong—we'll work on a definition later. After a limited time we evaluate each structure—deciding the highest is easy, but strength is trickier, and requires defining terms, and 'designing' evaluative tests. The students have great fun, lots of learning occurs too—during building, discussions, evaluation, and throughout the rest of the semester as we refer back to specific topics.

In graduate courses on Early Earth and Advance Structure, consideration of complex systems play a huge role. Early Earth challenges us all to think about the proto- and nascent Earth in ways that open our minds, challenge dearly held beliefs, and, if we are to be successful, to be honest with assumptions and be open to tossing each of those assumptions. In Advance Structure, rheology reins again, but now with even more complexity. We know a bit more, so we are all that more aware of what we don't know and the true pitfalls in our simplified view of the wonderfully complex systems embodied in attempting to understand stress, strain, rheology. Again, in iterative fashion we try to quantify the complexity, always keeping foremost in our minds, that the systems' complexity will (always) trump our understanding—always!

I teach a sophomore-senior level major/minors/teachers course title "Earth's Dynamic Interior'. The goal is to study Earth as a planet, from core to crust—well OK, we also need to include the atmosphere, hydrosphere and biosphere, and we consider the Earth through time—and we compare and contrast the Earth with other terrestrial planets, or terrestrial-planet-like bodies. The other major course goal is help student to be able to begin to think about the Earth quantitatively. The course includes homework problems aimed at teaching students how to quantify: isostacy in various ways, seafloor spreading, uplift-erosion rates, etc. the idea is to help them to understand basic simplifying assumptions, and when we can make these assumptions, and when we cannot. Isostacy is simple, right? Yes, right, but also, absolutely wrong! (Or frightfully naive, at best). Consider a region's topography (through time) as a function of all the players... from the atmosphere above (generating weather and climate), to the components of different density from crust, to mantle, to core-mantle boundary... and yes, perhaps even into the core. Now think about how those different density components came to be. Is their density related to composition? To temperature? To fluids? To history? By the end of the semester we have a class discussion on the complexity of region's elevation (and its elevation through time). We bring in concepts that the students used in their completion of different homework exercise with differ 'views' of isostacy, and first-order concepts and 'facts', that we touch-on, and learn about, during the fair bit of time and effort learning about the Earth's interior. It seems effective to take a simply concept, like the elevation of a region that students can all picture, and to discuss as a whole group—in what becomes a non-linear and open discussion with nearly everyone taking part—all the different factors that come into play, and the scale (in space, density, and time) in which these different factors play a role. We do a similar discussion about the water cycle. All students did a water cycle project in elementary or middle school, but we consider the water cycle involving the mantle, the transition zones, mantle melt formation, ocean floor hydration, subduction—bringing in as many different avenues, side-trips and cycles as the class brings up.

To me, learning about complex systems is very much an interactive exercise, and it starts with this type of thinking. Figuring out the various 'players' or variables, and then seeing how a few variables interact with one another, and then continuing to add complexity and feedback loops—using equations, or modeling programs, or to start with, thought experiments. Many students find it very challenging to accept, or to wrestle with, the concept that they might be able to understand (or begin to understand) complex systems, rather than to just toss up their hands to the complexity. Clearly the reaction to complex systems differs by student. Some students are truly thrilled to learn about complexity, whereas other students seem to be immediately defeated when they catch a glimpse of a systems' complexity.

Working toward an understanding of, and working toward ways to teach about, help others to learn to embrace complex systems, is a life long journey. As in life, I have so much to learn, but I sure find the journey enjoyable.