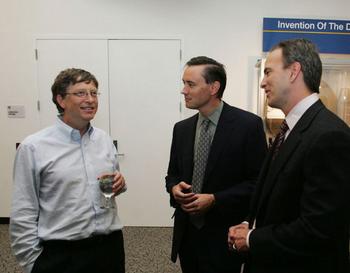 Hide
Bill Gates at a reception. Photo by Steve Jurvetson. Use: this image has a Creative Commons Attribution 2.0 license.

In the job search and interview process you will have some very brief, yet critical, opportunities to describe your research to departmental faculty, institutional administrators, and students. You'll want to be able to convey the nature and significance of your work to other academicians, who will have a wide range of areas of expertise. As with many situations, it's important to hook your audience early on, to convince them that what you do is important and that they want to hear more about it. To that end, it may help you to think about what you could say in the time of an elevator ride.

Participants from our Preparing for an Academic Career in the Geosciences Workshops have found it helpful to draft such statements in preparing for the interview process. However, if you memorize your statement, your delivery may be less engaging than if you simply think about the key points you wish to make. One workshop leader suggests thinking of this in terms of a three-part delivery: Statement... But... Therefore.... For example, "X happens, but we don't yet understand..., therefore I am...." This format encourages you to explain why your work is important.

Examples from "Preparing for An Academic Career" Workshop Leaders