The public health studies, which focused on the Woburn leukemia clusters, were the earliest publications that brought attention to the health problems in Woburn. Eventually, a 1997 Massachusetts Department of Health study validated the plaintiffs case, statistically supporting the argument that there was an anomalously high occurrence of childhood leukemia in the community. Although the health studies performed and published before the trial were produced by entities that were credible and highly experienced, the defense spent considerable time and effort presenting shortcomings of these studies.

Listed below are links to copies of several significant studies regarding the health problems in Woburn. The first studies was conducted between 1979 and 1981 by the Massachusetts Department of Health. The subsequent studies by the Harvard School of Public Health and the U.S. Agency for Toxic Substances and Disease Registry (ATSDR) attempted to further define the relation between environmental factors and the resulting types of cancer and other diseases in Woburn. Keep in mind that only the first Massachusetts Department of Health study and the Harvard School of Public Health study were completed before the Woburn Toxic Trial and were available for inclusion in trial testimony. 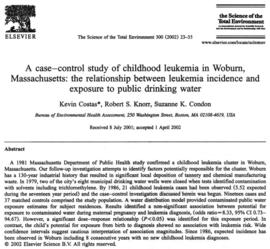 Hide
Cover page of the Costas, Knorr, and Condon (2002) follow-up report of the Massachusetts DPH study