Construction and Use of Wells G and H


Wells G and H were constructed in 1964 and 1967, respectively, in response to the growing need of the city to supply water to its residential, commercial, and industrial users. The 1958 Whitman & Howard report suggested that the area east of Mishawum Pond in the Aberjona River valley should be explored for additional potable groundwater supplies. The ensuing drilling and testing program showed that test well sites 8 and 16 held promise although the chloride concentrations (20 and 39 parts per million) were higher than normal but satisfactory from a sanitary point of view (Tarr 1987 ).

Well G, which is also known as well S39, was drilled to a depth of 89 feet in a 24-inch borehole. A 10-foot long well screen was set at the bottom of the casing string across from brown sand and gravel. The ground elevation at the well is 45 feet above sea level. The screened interval of the well occurs approximately at -35 to -45 feet below sea level. A graphic depiction of the geologic log at well G (Delaney and Gay 1980 ) is shown in the Resource Collection under Exploration, Construction, and Use of Wells G and H.

Well H is also known as well S40. It was drilled in a 24-inch borehole to a depth of 88 feet. It also has a 10-foot long well screen set at the bottom of the casing string. The well screen is placed across from sand and coarse gravel, according to the geologic log at the well (Delaney and Gay 1980 ), which also can be seen in Exploration, Construction, and Use of Wells G and H. 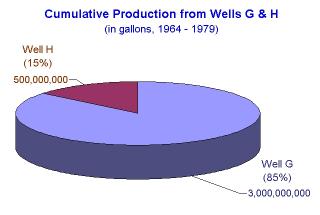 The largest and longest stress on the ground-water flow system from pumping wells G and H began in March 1978 and ended in May 1979. During this period, both wells were used and pumped at rates close to maximum production rates.