Treatment of Leukemia -- Then and Now

The Woburn trial focused on a suspected childhood leukemia cancer cluster and the connection to toxic pollutants TCE and PCE in the municipal water supply. This webpage includes background information on the treatment of childhood leukemia.

Between the late 1960s and now, the treatment of leukemia has changed significantly. In the 1950s, nearly all children with leukemia died. The survival rate for children today is about 75 percent and childhood leukemia is one of the most successfully treated cancers. 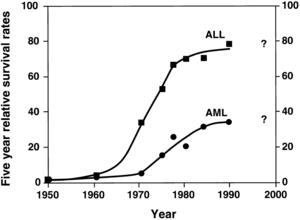 In the early 1970s brain and spinal column radiation (cranospinal radiation) was used to prevent central nervous system leukemia. This treatment reduced the rate of relapse from 50 to less than 10 percent. However, many survivors developed cognitive dysfunction that becomes apparent 2 to 5 years after treatment. This is called "late effects" (Kersey 1997 ).

Currently, ALL leukemia is treated by chemotherapy, radiation therapy, or bone marrow or cord blood transplantation.