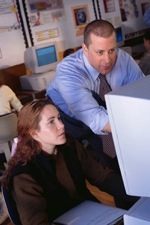 Economics as a discipline is tailor-made for instructional simulations.

In considering instructional simulations for your courses, it is important to understand that the foundation for including instructional simulations already exists in many economics courses. For example, an instructor using a simulation in an intermediate macroeconomics economics course would devote considerable class time to explaining the specific structure assumed by the simulation. In the absence of the simulation a general discussion of macroeconomic modeling would still be included in the course.

Finally, the mathematical model that powers a simulation is sometimes captured by a spreadsheet. Role playing behavior is often called a game, and experiments are often based on game designs. This means that the same instructional example may be described as a simulation, a game, or an experiment, depending on the context.