Teaching Principles Students How to Assess the State of the Economy

This page authored by Steven A. Greenlaw, University of Mary Washington.
Author Profile
This material was developed as part of the Carleton Teaching Activity Collection and is replicated on a number of sites as part of the SERC Pedagogic Service Project 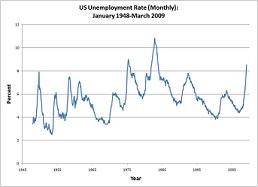 Principles students are asked to collect and analyze data on a few macro economic aggregates to give them a first taste of empirical work. Students must create data tables and charts using a spreadsheet, and draw conclusions based on three variables which may be telling somewhat different stories. Critical decisions include which measures of GDP Growth, inflation, and unemployment to choose, and how to weight them in reaching a conclusion about the overall state of the economy.

The objective of this assignment is for students to use data to develop a conclusion, and then turn their analysis into a written argument, supported by the data as evidence. The assignment is further complicated in that the data are usually somewhat contradictory.

This assignment is designed for a principles of macroeconomics course. While piloted in a moderate size course (n = 35), the assignment could be used for larger principles courses (with TA support), as well as for any upper level course to introduce students to the stylized facts of the field. The assignment is preceded by a class session where students are introduced to the major sources for U.S. macro data, including the Economic Report of the President, which is described as "containing all the data a student is likely to need in macro principles. It is also preceded by a session on the difference between nominal and real measurements, and why the difference matters.

The purpose of this example is to introduce students to empirical analysis and to some of the stylized facts in a field. This assignment serves to cap our discussion of national income accounting and the state of the economy. Students are asked to evaluate the claim by a senator that the decade of the 2000s was better than either the 1980s or the 1990s. In order to do this, students must collect data on three variables from the last several decades: real GDP growth, inflation rates, and unemployment rates. Students then present the data in tables and charts, and characterize the data for each variable in each decade. One can tell the students where to find the data online, or leave it up to them. One can also specify how to characterize the data (e.g. min, max, mean, increasing, decreasing) or leave it up to the students' discretion. Students must also provide complete citation information for the data sources. Finally, students must draw a conclusion about which decade showed the "best" economic performance, and more importantly to explain their reasoning. This assignment leads to a discussion of the results in class on the due date. The assignment handout is provided below.

In reviewing this assignment, you'll want to discuss the difference between the CPI and the GDP Deflator and how they tell roughly the same story, though each is probably a better choice in a certain context. Similarly, you may want to compare different measures of the unemployment rate.

There are many sources of US macro data online. A good one is the annual Economic Report of the President.