Cultural Heritage of the Aleuts

This page was written by Jeanette Wolak and Erin Klauk as part of the DLESE Community Services Project: Integrating Research in Education. 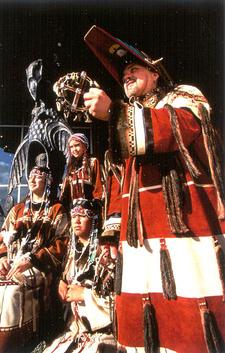 The Aleuts of Alaska are part of an ancient race of maritime peoples who settled in the Aleutians approximately 7,000 years ago (Langdon, 1978). Prior to European contact, the Aleuts inhabited all of the major Aleutian Islands, the Alaska Peninsula, and the Shumagin Islands south of the Alaska Peninsula (Langdon, 1978). Historians and archaeologists have estimated that the Aleut population was between 15,000-18,000 in the early 1700s. However, warfare, starvation, and epidemics caused by contact with Russian and European sailors decimated the Aleut population. The estimated number of Aleuts dropped to a few thousand by the end of the 18th century (Langdon, 1978).

Aleut hunters were taken from their homes in the Aleutians and brought to the Pribilof Islands by Russian fur traders in the 1700s. Permanent communities were established on St. Paul Island and St. George Island by the 1820s (Corbett and Swibold, 2000 ). The Aleuts in the Pribilofs were forced to hunt northern fur seals and sea otters for Siberian trading companies and later for the Russian American Company, which established a licensed fur-seal monopoly (Corbett and Swibold, 2000 ).

With the purchase of Alaska by the United State in 1867, Aleuts found themselves classified as 'Indians' and lost many of the rights they had enjoyed under Russian rule. The U.S. government's mistreatment of Aleuts continued into the 20th century. Many Aleuts were evacuated into internment camps during World War II and treated worse than Japanese and German prisoners of war (Corbett and Swibold, 2000 ).

The biggest challenge to Aleut communities today is a lack of economic opportunity in the Pribilofs and Aleutian Islands. Fishing has become the dominant industry, but smaller communities like St. Paul and St. George struggle to compete with commercial fisherman in the Bering Sea (Corbett and Swibold, 2000 ). Years of intensive fishing, combined with an overall climate change in the region threaten the wildlife and environment of the islands, home of the Aleuts.

To further investigate the culture of the Aleuts of the Pribilof Islands, check out the links below:

Culture of the Aleuts of the Pribilof Islands

Resources containing information about the culture of the Aleuts of the Pribilof Islands, Alaska.

Show me culture resources about the Aleuts of the Pribilof Islands