Taking Notes with a GeoPad: Basic and Enhanced Functionality

The GeoPad offers a unique opportunity for enhanced note taking. GeoPad notes fully replace the functionality of the traditional field notebook, but, most importantly, are able to go well beyond the limitations of paper notes. Among the challenges for students in a field course is learning to make relevant observations and to commit these observation to "paper". This is the traditional role of the field notebook, as it complements the paper map. A GeoPad combines the mapping capabilities that are described elsewhere with the role of the field notebook into a single, linked environment, while adding new spatial and other functionalities that were previously not available.

This section on GeoPad note taking focuses on the modern notebook capabilities and is subdivided into the following categories, with examples that illustrate these several types of functionality:

Two standard options are available for note taking on a GeoPad that using its pen-based capabilities. These include Windows Journal and OneNote.

The program Windows Journal is distributed with all TabletPC computers. It offers a basic pen-based environment that fully replaces the functionality of the classic field notebook. Text, sketching, pen colors and weights are available to the user. Many field geologists will find this program suitable for immediate their needs. 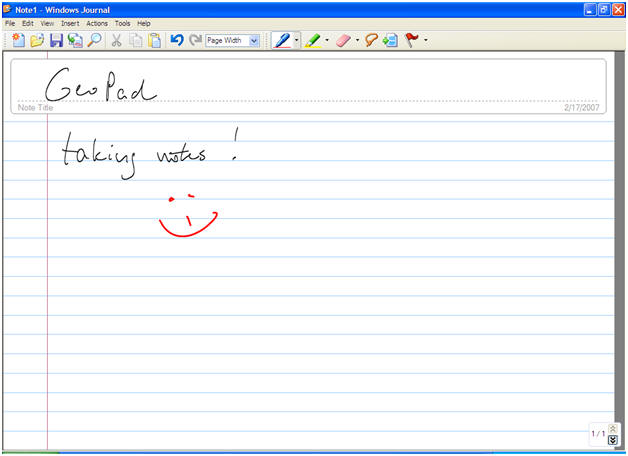 Microsoft's OneNote program is a significant improvement over Windows Journal as it offers enhanced functionality. It is considered the "killer application" for pen-based computing by many TabletPC users. In addition to standard functionality in Windows Journal, the program offers convenient import and export capabilities of electronic material ("clippings"), the ability to link to other software (including ArcGIS and the supporting software that is described elsewhere), and, especially image mark-up capabilities.

Field notes taken with OneNote can be exported to several file formats. Notably exporting to the PDF format offers an easy environment for sharing over networks and for storage. Both native OneNote files and their PDFs are fully text searchable, offering easy access across notebook pages and notebooks (OneNote does not automatically include an export to PDF function, which is an Microsoft Office Suite add-on that can be downloaded from Microsoft's website. Note that this add-on creates PDF functionality for all Microsoft Office suite programs.). 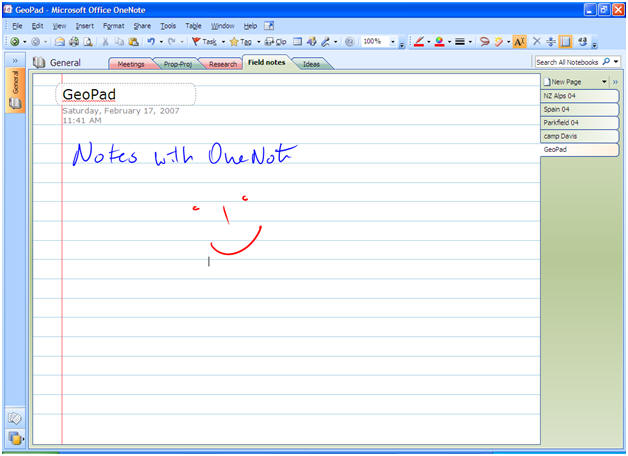 The descriptions below will focus on OneNote as the preferred environment for a GeoPad, which is typically distributed with today's higher-end TabletPCs and is found as part of the full Microsoft Office 2007 (Enterprise) suite.

While recording map elements on a GeoPad, students often need to take field notes for various complementary activities, such as making a stratigraphic section, stops during regional field trips, or record basic descriptions of outcrops and rocks in their map area. The note taking capability of the GeoPad offers the traditional fieldbook functionality, but removes the need for carrying a notebook, pens, color pencils and eraser.

Electronic notes can be linked to map location in a variety of ways. A basic approach is numbering stops on the ArcGIS map and writing corresponding number in notebook, followed by observations and notes. More sophisticated ways are possible through automatic linking of ArcGIS and OneNote, but these are not really critical and may even distract the beginning user. An example of basic field notes, using text and some color is below, which is indistinguishable from the traditional field notebook. Note that this use works equally well in Windows Journal and in OneNote. 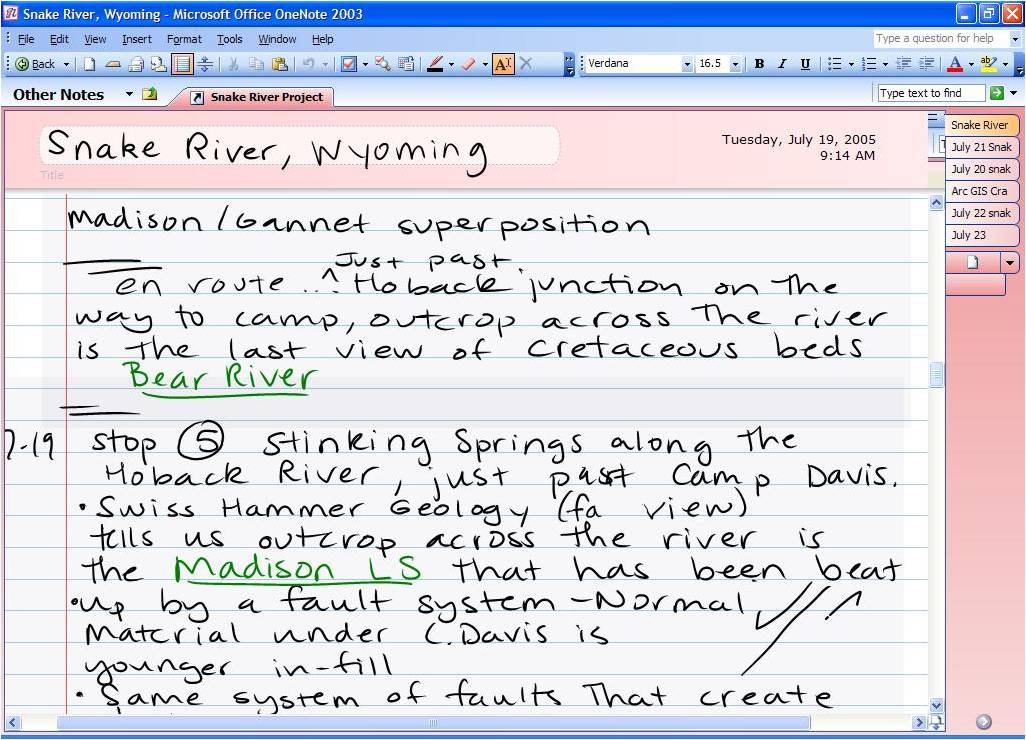 One of the key goals of field mapping is to develop a student's spatial analysis skills, which is promoted by making sketches of field observations. In fact, experienced geologists mostly use their notebook for such sketches, which can now be replaced and enhanced by the GeoPad. Access to different line weights and colors is available, which would otherwise require a full set of (color) pencils. Standard symbols can be inserted as well as customized auto text (for example, "dip direction/dip is: _____/___").

Field annotation can be modified at a later time or new material can be inserted during return visits by inserting blank space. Entire sections can be moved into a different order or pages inserted. The eraser functionality, which sometimes resides in the pen, keeps the notes clean and organized, while the copy-and-paste option allows for exploring multiple interpretations of the same observation set. Examples of annotated sketches are shown below. 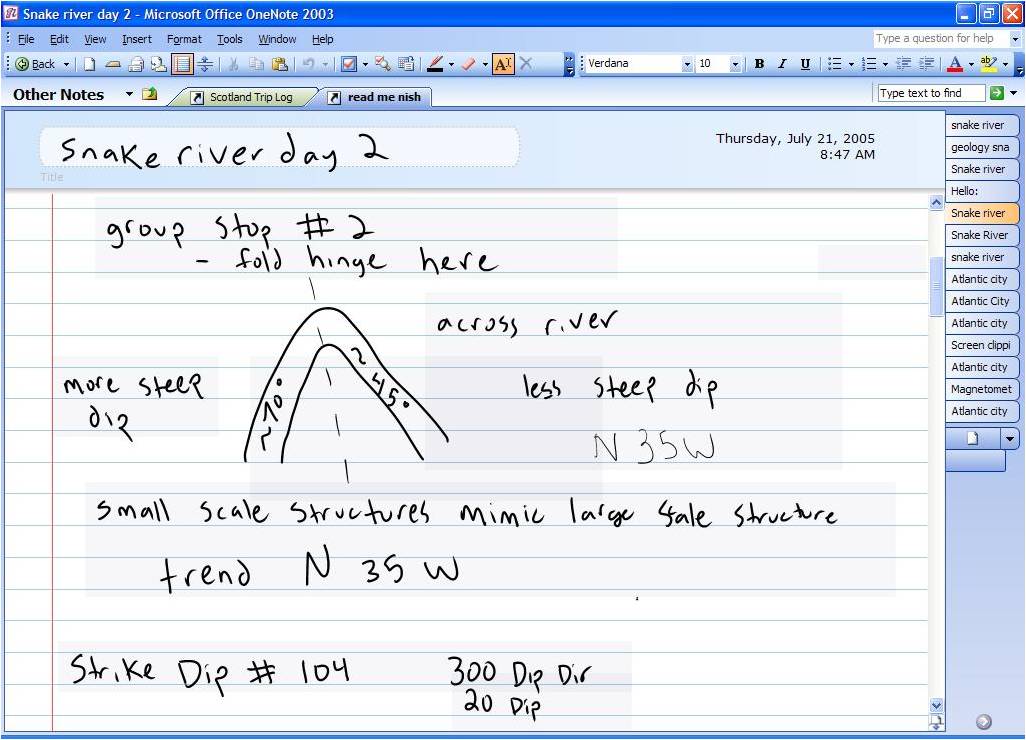 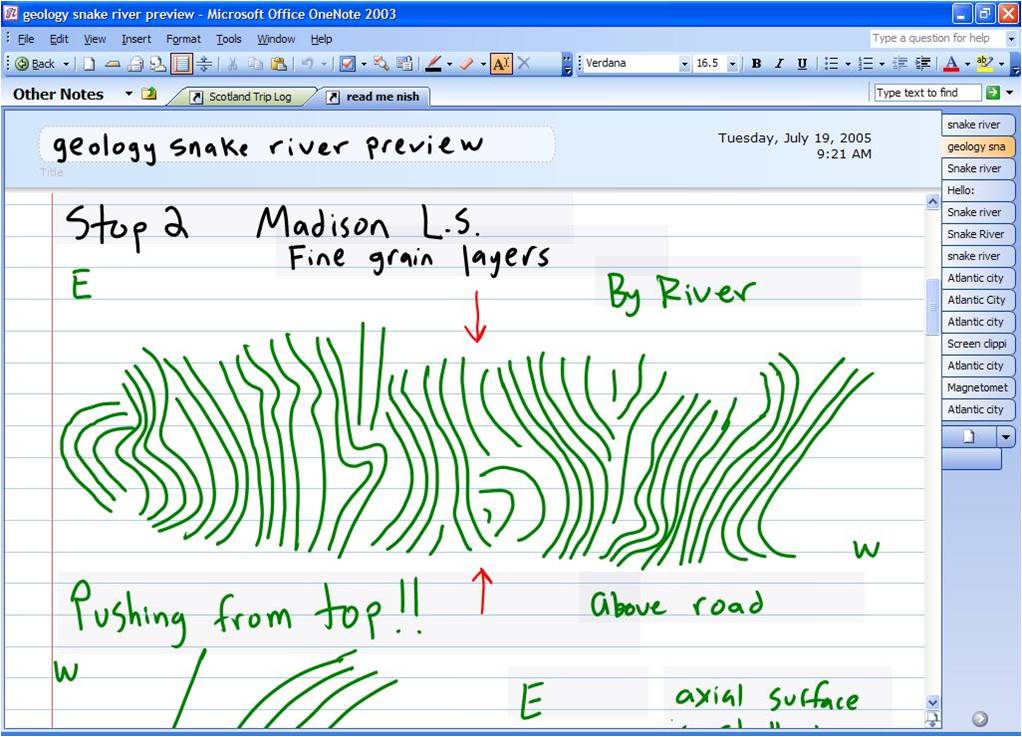 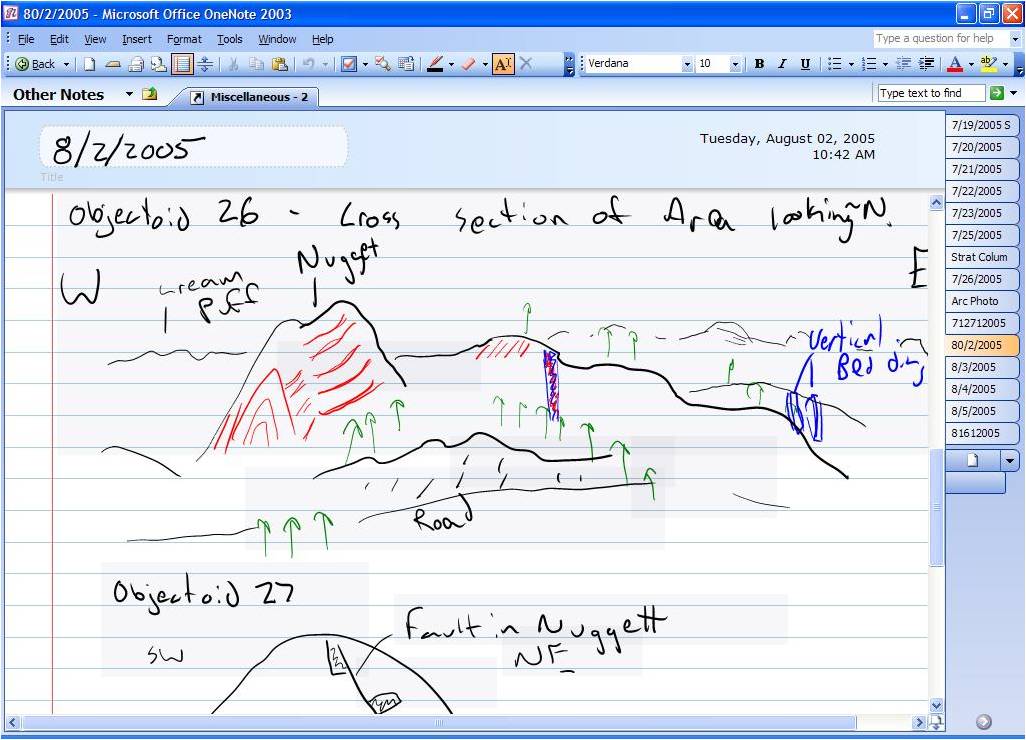 The pen-functionality of TabletPCs also allows easy copy-and-paste (or "clipping") from any active window on the GeoPad. One useful example is clipping a part of the field map for additional or multiple interpretations or complexities that could not be resolved. Evolutionary mapping steps can also be stored to show the progress from multiple visits and for later evaluation of observations.

Probably the most dramatic enhancement that will greatly improve a student's (and instructor's) observational skills is annotated field photographs and other imported images. During stops, an instructor may describe several geologic characteristics while pointing at a landscape. This show-and-tell is sometimes supported by sketches on a white board, but often puzzles novice students. With a GeoPad, we can distribute the white board base sketch, or we can also allow students to capture the landscape and add their understanding of the geology.

Relevant field photos can be pre-delivered by the instructor, but student photos can also be captured for subsequent marking. Photo uploads are possible with USB cables that are standard for all of today's digital cameras, while WiFi and Bluetooth-enabled cameras remove the need for any cables. Especially the latter, Bluetooth-enabled cameras, consume little battery on both GeoPad and camera, and allow direct linking and date/time-stamping in OneNote. 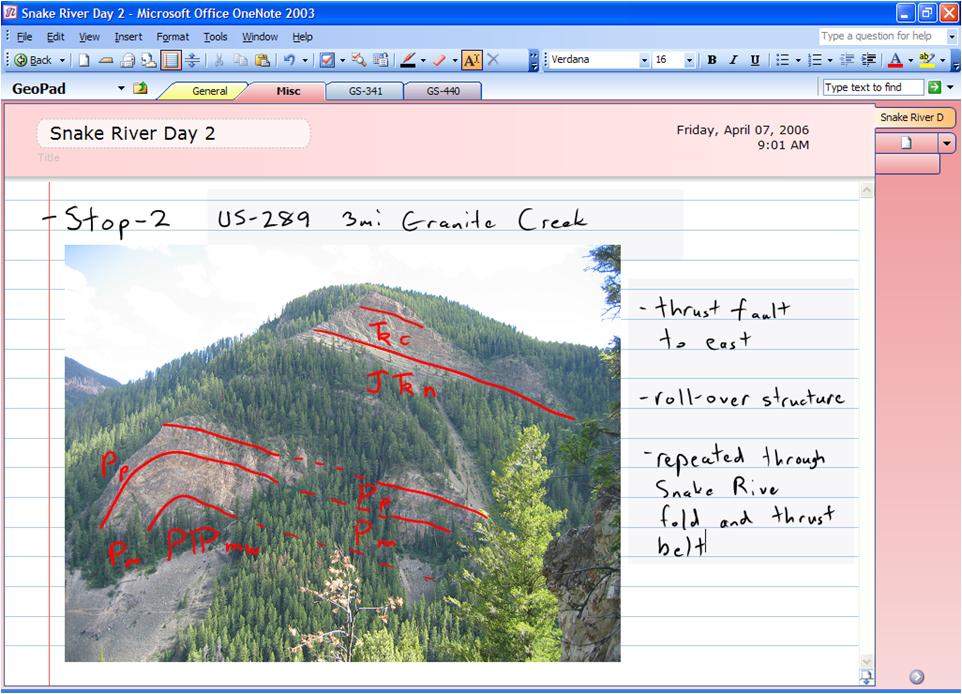 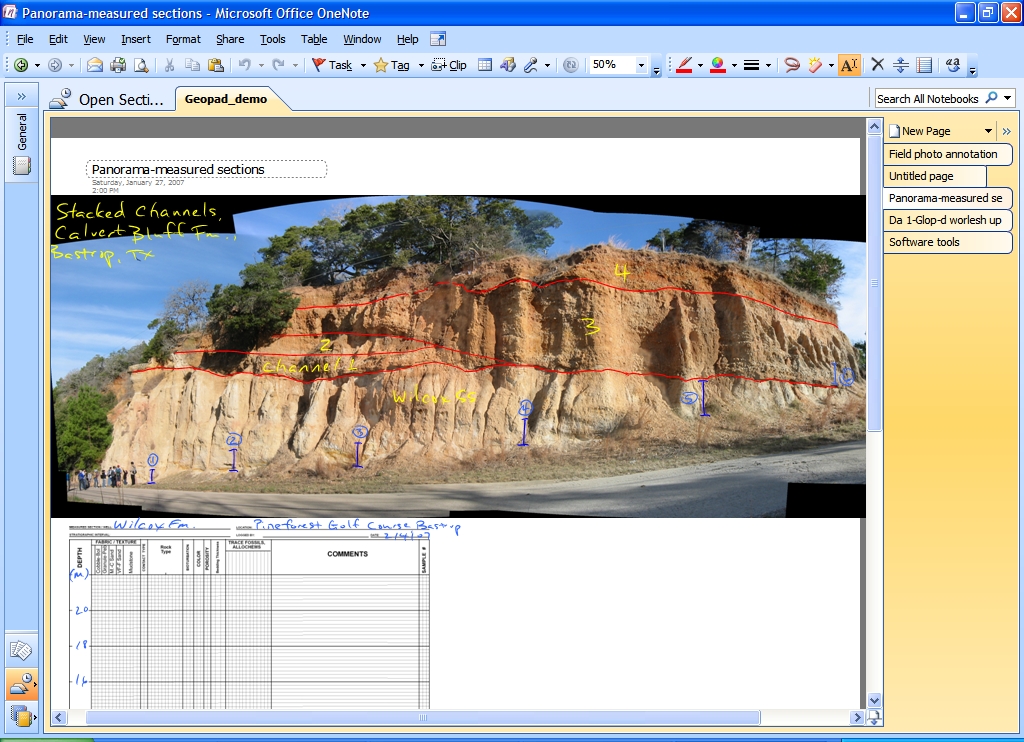 In addition to photo mark-up, students can mark-up other image material. Examples include maps, overview sketches, or competing interpretations. They can further examine their annotated images by using on-off toggle functionality that will separates their interpretative notes from the image.

A final set of novel functionalities on the GeoPad that can have many different uses are the ability to record audio and video. Explanation at road stops or student comments can be recorded and used for later playback during report writing or study. Video can capture panoramas that complement the notes at stops or at complicated outcrops. These benefits of the GeoPad are new and only now emerging. Given today's A/V savvy students, the potential of audio and video is only limited by instructor and student's imagination and the educational goals of these activities. Users with examples of this capability are encouraged to submit their experiences to the site.