The origin of volcanism in the western United States has been a topic of considerable research interest for many years. Isotopic data have provided some of the most important information used to test petrogenetic models for origin of the igneous activity in this region. 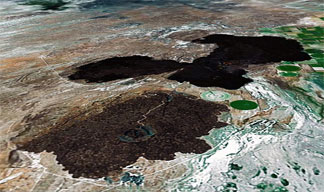 Basalt flows, Black Rock Desert, Utah
Image produced with Google Earth
Young volcanic activity in the western U.S. spans a large compositional range from mafic (basaltic) to silicic (rhyolitic). However, different magma types within this compositional spectrum may have very different origins. While basaltic magma originates from portions of the Earth's mantle, magmas with higher SiO2 contents like andesite and rhyolite usually have more complicated origins and cannot be melted directly from mantle sources. Instead, andesitic to rhyolitic magmas require additional fractionation of mantle-derived basalt or secondary partial melting of older mafic rocks. Still, many petrologists believe that higher-silica rocks like andesites and rhyolites are upper-crustal manifestations of deeper (mantle)-derived basaltic magmatism. For this reason, a study of the mafic magmas (basalts with SiO2 < 55 wt.%) will yield clues to the ultimate causes of most of the volcanism which has affected the western U.S. This is the reason we focus on mafic rocks for this exercise.

Isotopic compositions are of more value for determining the ultimate sources of magmas than major- or trace-elements for the simple reason that isotopic fractionation is assumed not to have occurred during igneous differentiation of the original parental magmas. Therefore, the isotopic compositions of the volcanic rocks at the time of eruption should closely reflect the isotopic compositions of their parental magmas and the sources that partially melted to form these magmas. However, with time after eruption and formation, the rock's isotopic composition will change as parent isotopes (e.g., 87Sr) and decay and new daughter isotopes (e.g., 86Sr) accumulate in the rock. The older the rock is, the larger the age correction will be to determine its initial isotopic composition from its measured composition. However, because of the very long half-lives of many radiogenic decay systems, this correction may be negligible for young volcanic rocks. Another factor that will affect the magnitude of the age correction is the relative amount of parent element to daughter element in the rock (e.g., Rb/Sr).